First can I thank the people who have bought some of the rules and books I put up for sale, I haven’t got around to putting the remaining ones up on Lead Adventure yet but maybe next week.😁

In terms of gaming and focusing on where I’m going with the hobby it’s been quite an active week, 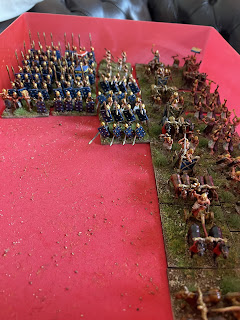 I will take some better pics when they are deployed for battle, these are Museum miniatures from their Z range digital sculpts and very nice they are to.

Lee Gramson sent me another batch of painted 15mm ECW for my Edgehill project. He’s painted over 95% of the collection and I think I’m now in the final stages, I need to paint some artillery pieces and some wagons and I think my next blog post will be about the collection.

On the 28mm front I’m painting another French unit for the 1796-1799 collection they should be done by next week and once based it will give me two demibrigades and I will then just need to paint one more for my game.

Gaming wise it’s been An Kent’s at the club but following on from my desire to return to boardgaming last Friday Steve and I played the introductory battle -The Battle of the Bargradas plain. From GMT’s SPQR in their Great Battles of History series.

The notes did say the game favoured the Carthaginians and so it did with my Republican Romans taking a severe beating. The system is very similar to the Man of Iron series so I was reasonable comfortable and we played with the GBOH simplified rules which were just at the right level of detail I was looking for 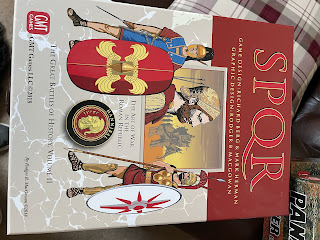 This will be certainly getting a run out in the near future for sure and has a lot of playability, I shall give a report if the scenario isn’t so one sided 😁
Finally I purchased the following two games. I wanted a low level WWII game that was reasonably straight forward to pick ( no where near as complicated as squad leader) and had depth. Norm form the Battlefield and Warriors blog suggested Panzer and as it so happens he has just posted a neat insight into the game on his blog.. The introductory scenario will certainly be getting a lot of my attention over the next week and I’m hopeful that I can use the system for a mini campaign and potentially some figure gaming in the future 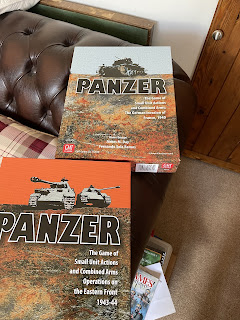 You have much going on, Graham!

First, thanks a bunch for offloading some of your books. I picked up a great collection.
Second, your `15mm Sumerians looks great. I am still working toward my first battle with my growing 28mm Sumerians. Should not be too long.
Third, SPQR is a terrific game/series. If you bought the Deluxe edition, you will have a boatload of scenarios to try.

You’ve been a busy chap!

Watching how you get on with Panzer with great interest. Be good to hear your views as well as Norms. Might have a dabble worth it myself.

Graham, a good pick-up of hobby pace. I also use the Simplified rules for SPQR, which as you say, sits around the the ‘Men of Iron’ complexity (good). I see GMT have Deluxe Alexander from the same series on the P500, so all investment in these rules are well worthwhile.

Yes, I am enjoying my Panzer package. Did you know that the 3rd edition data cards were printed incorrectly. They have a German vehicle on one side and a soviet on the other, rather than each card being single nationality on both sides. I ordered mine from Second Chance Games, they told me about it and GMT had sent them replacement cards to be included in the sale of the base unit.

The most recent boxes being sent from the States do have the proper cards collated into them. I might just be worth you checking yours.

Jonathan,
I’m sure there will be more books to come. I do have a few Sea People and Mycenaean in 28mm but they’re only for skirmishing. I feel now that the battles are best fought small scale 😁 and yes the SPQR box is the deluxe so lots of battles.
JBM
It certainly looks good and at around my level
Norm,
That will explain why I got a second pack of cards 😁 I’m still reading the rules at present 🤣
I’ve got great battles of Julius Ceaser on its way together with the Musket and pike dual pack

It's been a great pleasure painting the ECW's for you Graham and I just can't imagine what they are all going to look like when laid out for the Edgehill game!

Love the little Sumerians Graham…
It’s a period that I find very tempting.
I never really consider getting board games… but when I get a chance to play them I always find them enjoyable… something I may look into when I’ve got the house back into some sort of order…