Following on from my last post and thank you gentlemen for your comments a most excellent weekend was had by all.
As you're aware these actions usually find their way into one of Charles' publications so far be it for me to give a detailed account of the game.
However I will make some comments and observations - as you will know the battle started in the early hours of the morning in the dark with both armies reacting to what was around them as dawn broke.
Prior to the game Charles had sent us both briefing sheets and a very small map with a request that we wrote our orders and submitted them prior to the day.
Short of putting a curtain down the middle of the room then this process worked extremely well, we used reduced move and firing distances to reflect moving at night and were obliged to follow our orders until the enemy were spotted or troops arrived at their designated positions.
What quickly became apparent is that both John and I had completely misjudged the distances between key points on the board but had also completely got it wrong on our assumptions of where the enemy would be and what there plans were.
To add even more frustrations other than our CinC's we also only had one ADC with which to change orders, its fair to say that by the end of the day my General and his Aide had been run ragged.
Charles' amendments worked well to reflect the mayhem and chaos that often follows a night time engagement.
A close fought bloody  battle.
Just a few pics of the game which I don't think give anything away. 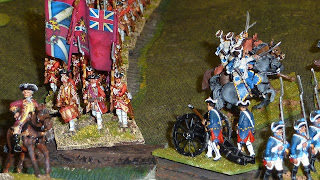 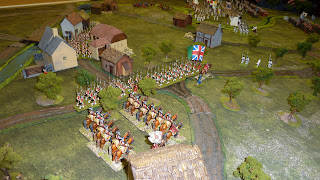 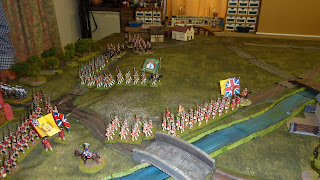 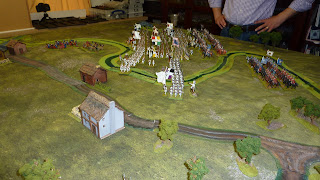 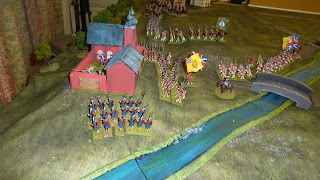 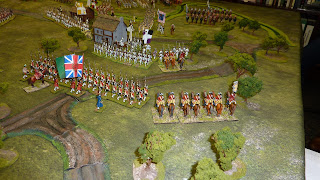 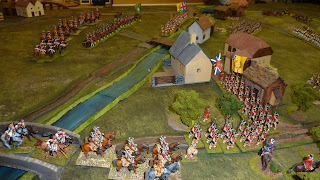 The March to Kloster camp.

This weekend I shall be attending Charles Grant's wonderful home for a game against my erstwhile opponent John Dougan.
We shall be refighting Kloster Camp and hopefully it should provide enough entertainment and interest to be included in Charles' next book in the Refighting History series.
I'm taking a few of my pieces along but we found we were British Grenadiers short, as I base mine as part of the battalion then it was necessary to paint some more. Charles had 16, so I esent him a further 16 and set about painting my 16 plus a couple of officers. 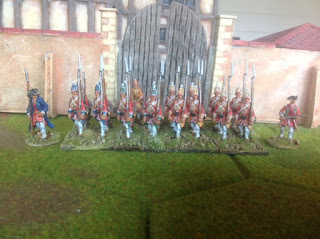 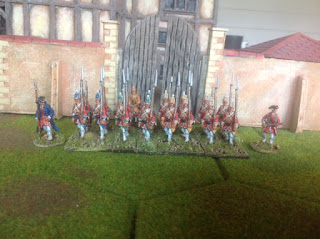 British Grenadiers i think one of the hardest figures to paint for the period, anyway these are my attempts.

First apologies for the absence, the business has been taking up quite a lot of time, the new sculptor has been extremely productive as has my paint bench,

However in between all of that I have eventually started umpiring the 1744 campaign. You may recall this was based upon the proposed invasion of England by Marshall Saxe and around 12,000 men in an attempt to place the Young Pretender on the throne.

The reality was that storms damaged around 12 of the invasion fleet transports and the French lost heart ( if it was ever in it).

The detailed account (now going to be in two parts) will appear in the Wargames Annual. 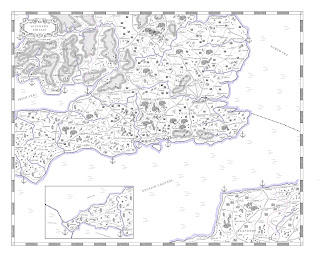 The British have already sent for the support of 5000 Hessians who could take around 2 -3 weeks to arrive.

The British have effectively sent dragoons to the southern coast and South east with the foot moving to positions around London. In reality the French chose Maldon to land. In this campaign the French player has chosen Sittingbourne in Kent.

The early days saw the French player choose to send the young Prince with two battalions of Infantry and some cavalry to Scotland to raise the clans ( not a move I expected) the remainder of the army boarded ships - not before delays set in due to the failure to load the artillery ammunition and bad weather.
The French started landing at Sittingbourne on the evening of the 10th June the first to land were two squadrons of Dragoons and a German brigade.

On the morning of the 11th the two squadrons moved out one on the road to Maidstone and one towards Ashford it wasn't long before the squadron moving towards Ashford was met by their British opposite number and received a rough handling but not before they observed British infantry deployed on a low ridge.

Marshall Saxe knew the rest of the army wouldn't be unloaded until late on the 11th so he ordered the Gemans and the Fusiliers de Morliere to move out and probe the British lines.

Major Semillon launched an aggressive attack on the British line who's infantry under Major Dundee were reluctant to move off the ridge and who's musketry was decidedly mediocre. 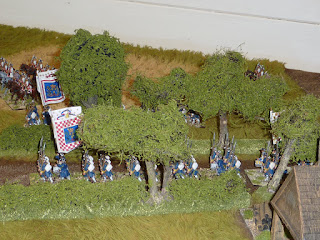 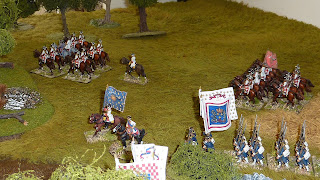 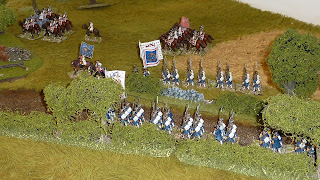 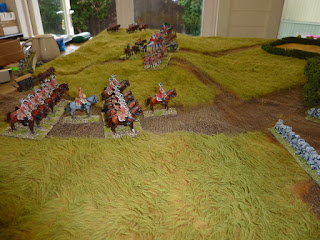 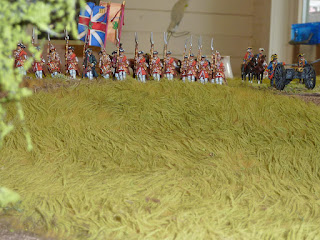 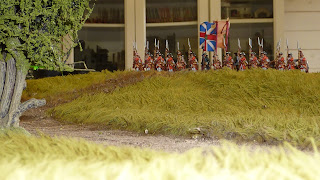 On the French right their horse engaged with the British but both sides fought themselves to a standstill, on the French left Saxe drove off a squadron of dragoons but were repulsed by the dismounted dragoons holding the farm,

the attack in the center closed rapidly with only light casualties due to ineffective British firing but just as the attack was about to go in the British found their form and decimated La Marck causing them to retreat. 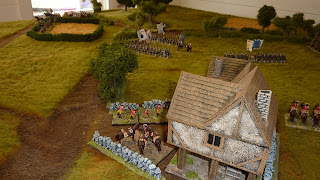 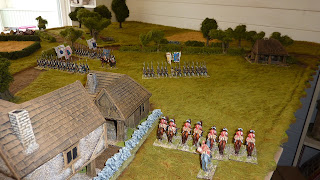 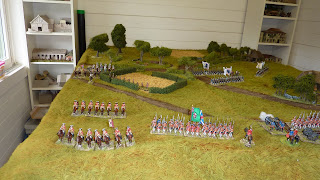 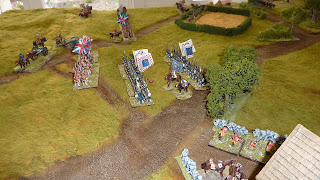 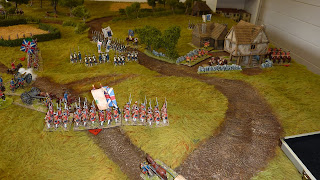 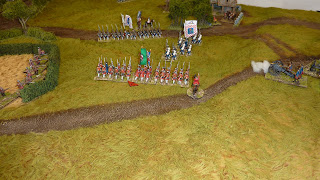 La Marck took the heaviest casualties and not many men will return to the colours that night!
Because my son was helping me we used Honours of War with my own house 'tweaks'