Musket and Tomahawks Day - The Raid


As promised here's the second of the scenarios we played on the 4th May.
Hope you like it.

Scenario 2 Raid.
The supply camp is situated in the small settlement of Serenity, some 5 miles from the new outpost at Forest Bay, it has been chosen as the main staging post for troops moving North and as a suitable location to assemble supplies etc for the troops.
With all the current activity the camp is garrisoned by some Provincial Infantry, a contingent of Rangers, some Colonial Milita and a few Mowhawks who seem to appear and disappear at will.
The camp consists of two wooden buildings and a number of tents one building is deployed near centre of the table and the other structures within 4” to 6” of this or another building/tent. 1/3 of the defenders non Colonial Militia are off table at the start, the remaining defenders must deploy within 4” of a building or tent. The reserves arrive if at the start of a turn a die is thrown and the score is equal to or lower than the current bound. They will arrive along the table edge opposite to that which the attackers deployed.
There is a small stream which runs across the centre of the table this is crossable but counts as very difficult terrain unless crossed at the bridge.
The French force must consist of at least 2/3rds Huron warriors and the balance Canadian Militia and are deployed within 6” of the Northern table edge.
Objectives
This scenario is Raid and the French forces must seek to destroy the buildings and the tents within the camp. All the attacking force is considered to be equipped with burning torches.
In addition there are a number of ‘loot’ counters which the attacker may carry off, one figure carries one loot counter at half speed, two  figures carry one loot counter at full speed. The figure cannot shoot whilst carrying and if in melee the counter will be dropped.
The game ends when the French have been driven off or they have burnt/destroyed all the buildings. Bonuses are achieved by carrying off the loot.
Sub plots for one officer per side are in play. 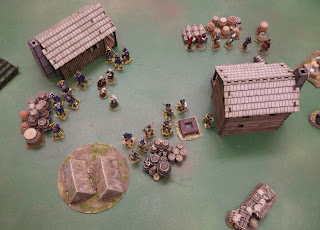 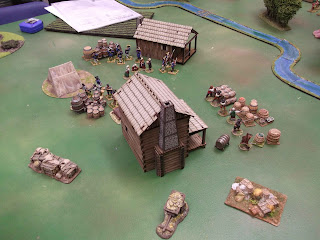 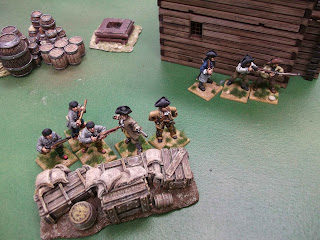 The Hurons and Canadian Militia appear from the woods, cross the stream and start their attack 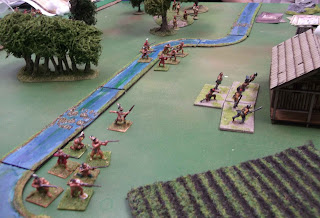 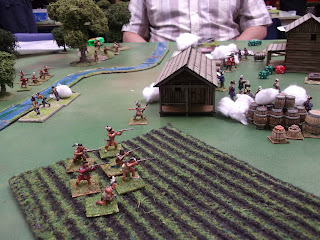 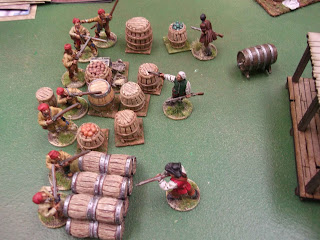 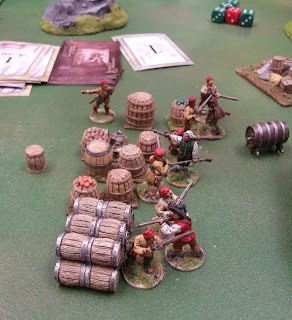 One cabin is on fire, the Provincials hold the flank against the Indians . 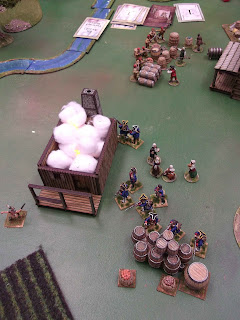 In the nick of time Rangers arrive and start a counter attack. 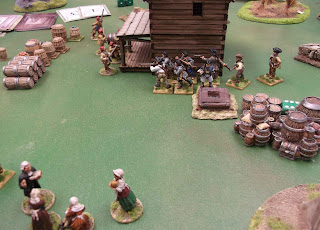 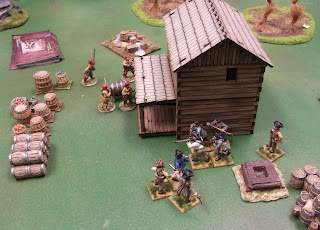 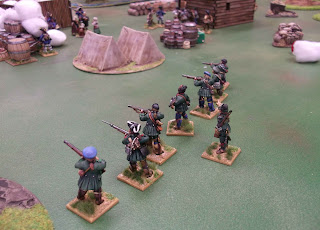 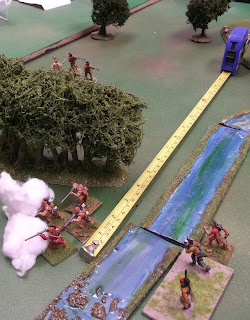 End game two of the three objectives on fire, but no additional supplies stolen and the French are forced to withdraw. 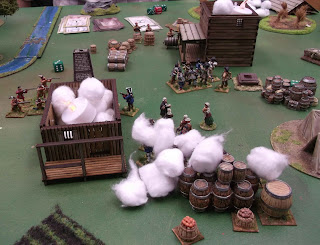 All Quiet on The MArtian Front 2

For those that haven't yet checked this out follow the ling to this blog to see some table top play ------- Those tanks are huge ---- Soooo excited
http://goo.gl/9FOA0 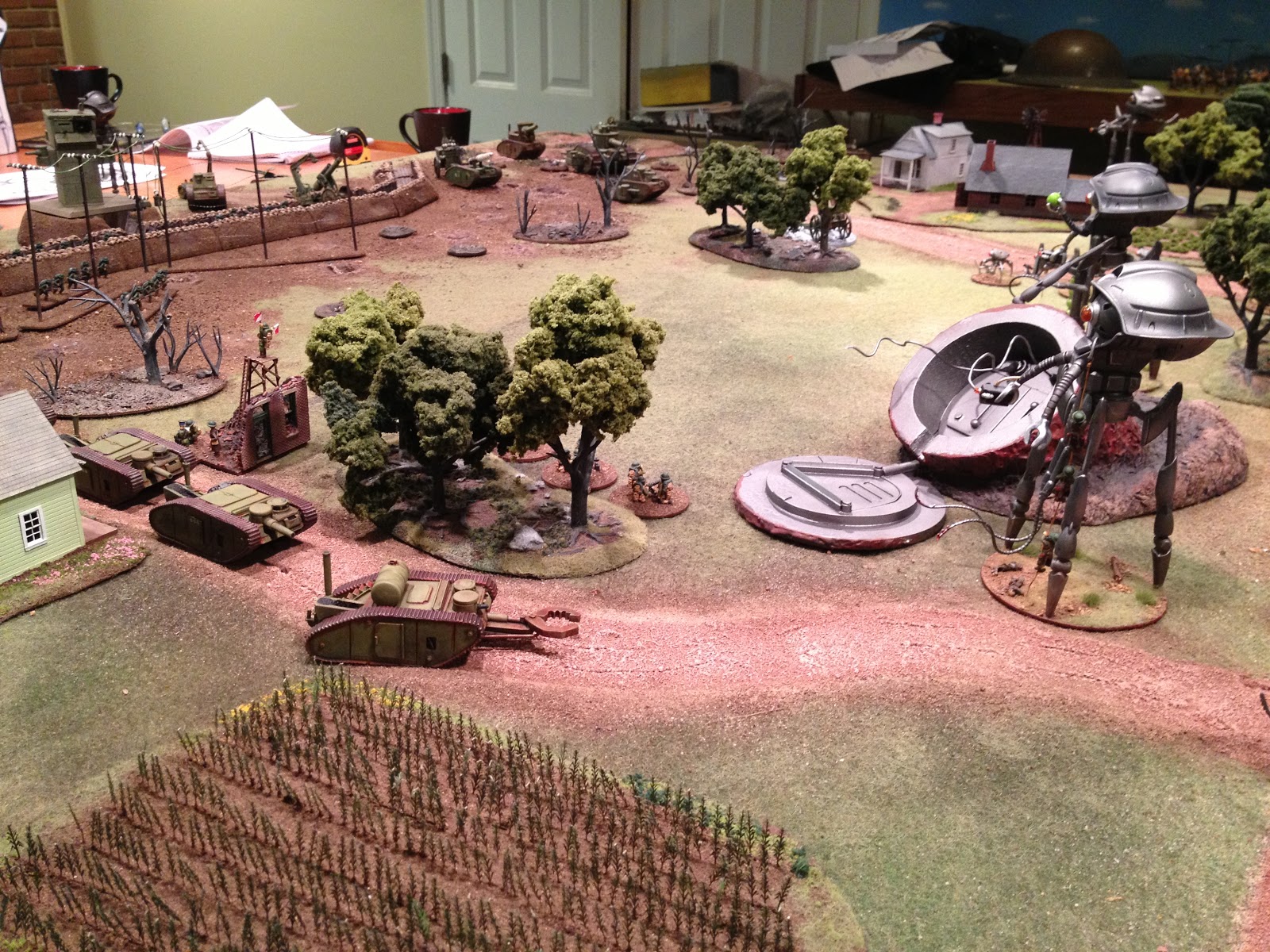 Quite a few people have been asking me for more pictures and more detail of the games played on our Musket and Tomahawk day so I thought time permitting over the next few days I would give details of each scenario together with some more pictures kingly sent to me by the Galloping Major himself.
The games lent themselves to a lot of inspiration to the recent articles which appeared in Wargames Illustrated.

This scenario takes place a mile or so from the main supply camp in a clearing being worked by colonial militia cutting suitable logs to build the emplacement for the artillery and a watch tower at Forest Bay. To support the militia are some Rangers who are currently scouting the surrounding area.
The Colonial camp is deployed within 8” of table centre and there are a number of barricades of cut logs surrounding the camp together with a couple of wagons, the militia deploy within the camp.
The Rescuers start off table and are in two groups.
The French & Hurons deploy in three groups on three table sides within 6” of the table edge.
Sub plots for one officer on each side are in play.
Objectives;
The militia need to hold out until the Rangers arrive and rescue them. If all the Rangers are killed before the rescue the militia the Colonials will surrender.
If the Colonial Militia surrender or flee before the Rangers arrive all they will find are the scalped bodies of those left behind.
Starting on turn 3 roll a D6 for the Rangers, on a 5 or a 6 they will arrive at the centre of two adjoining table edges.. If they fail to arrive throw again on turn 4, needing a 4, 5 or 6. On turn 5 a 3,4,5 or 6 and so on.
This scenario counts as Slaughter.

The Colonial Militia are alerted as one of their number staggers from the woods shot! The Officer orders his man to stand to and pray the Rangers return shortly. 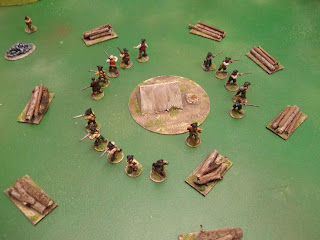 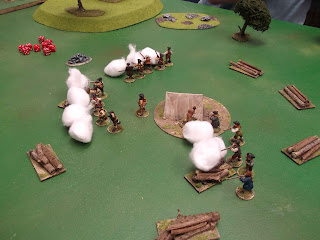 Already under pressure from the Canadian Militia and their Indian Allies (superb dice throwing by Bob) the Colonials start to give ground and are forced back from cover. 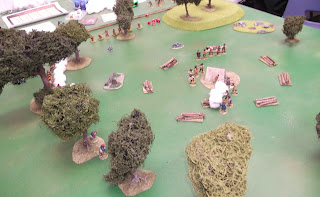 As the Colonials take casualties the French forces feel brave and strong enough to advance over the open ground to close in - still no Rangers!! 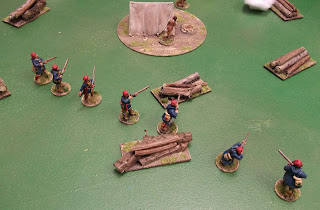 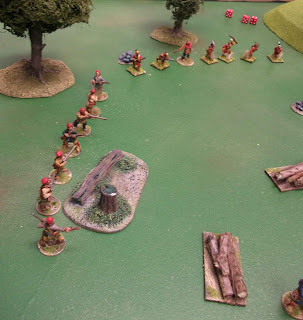 The Colonials are driven from the camp and the following bound its all over as they are wiped out to a man.!!!! 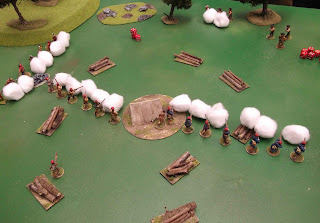 Thoughts on this scenario - I should have let the British player roll for  the Rangers from bound one or two at the latest. In the first bound every card in the pack was played as the last event card was the last card in the deck and that put a lot of pressure on the British Player coupled with some excellent shooting from the French Player.
Graham who played the English did say that next time he would run for the woods on the one side the French didn't arrive. However that may not be so easy if hidden movement is used!! As both players were new to the system we didn't use that in this game.

I will hopefully upload the other scenarios and pictures this week.
Posted by Graham C at 16:17 No comments: