Well before doing the ramble of what my plans are for 2018 a quick look at the bench shows that in anticipation of the Gangs of Rome game from Footsore miniatures for once I've got ahead of my colleagues by painting some Foundry figures I've had languishing in the lead pile for a while.
These have been painted for speed, base coat, limited highlight and army painter wash. 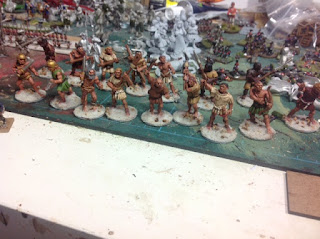 There's another 20 or so to go but that's only a couple of paint desk sessions.

I don't intend to ramble too much but like many as the year draws to a close we have a habit of looking back and then looking forward. Indeed I looked back right to the start of the blog and found that many of the projects I've mentioned over the years never progressed to fruition.

Indeed over the last two years I have sold a significant number of my painted figures and a lot of my lead mountain. In some cases it has been to help fund my miniature business in other cases both my son and wife made me question the validity of holding onto armies that I really haven't gamed with for many years. Fond memories yes but I still have the memories, there other argument was why shouldn't i have some of the enjoyment of spending the cash on what I wanted rather than waiting for someone else to benefit when I'm gone!!!  Selling large collections rarely raises the kind of value you would if sold in small lots but receiving over £10,000 in one go offsets quite a lot of the burden of trying to dispose of figures piece by piece.

So what am I left with and what am I going to do?
Well the never ending 28mm Ancients - Greek, Successors and their enemies keeps ongoing and I doubt will ever reach a final conclusion.
Likewise my 18th century collection continues to grow in association with my business but I would like to complete the Jacobites this coming year and start an early Saxon army which I hope to release, the French and less so the British will continue to expand - I would really like to start taking the fight to other areas of the world - India, Carribean, Ameirca whi knows.
28mm WWII for Chain of Command is a slow burner
15mm Ancients - only because that's the scale played at the club!
and in the background some Dark Age bits and pieces and I've mentioned before increase use of Peter Dennis's paper armies to play games in theatres I fancy but will never paint.
More gaming in my cabin and really that's about it. There are some decisions to make re. the figure business over the next couple of years but that discussion isn't for here.
Can I wish you all the very best for the coming year and may our hobby continue to provide inspiration and enjoyment to us all

Another little Road Trip to the past - Miniature Warfare Magazine

In 1968 when Miniature Warfare was first published I was but 11 and missed out on the first two and a bit years of its publication, I did manage to get the odd issue from volumes 3,4 and 5 but never managed to get complete sets.

Over the years I've always kept a look out for the mag but to no avail and I refuse to pay the current £6-£11 an issue currently being asked on eBay.

Out of daftness I emailed John Tunstill, who first published the magazine, and  who is still dealing in figures and asked if he had any spare copies, his reply was great he had a set of five volumes and in binders for a price that I couldn't get 6 mags on eBay.

They arrived yesterday so I'm going to do a bit of wallowing in nostalgia. 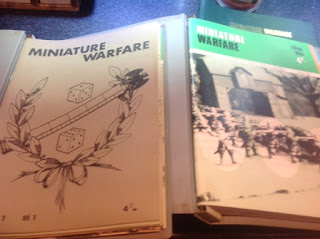 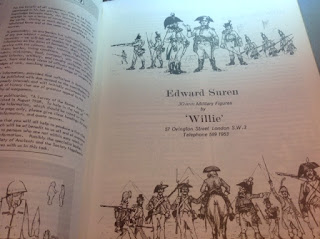 Having had a quick flick through what strikes me with the magazine compared with those of today is that apart from the production quality the articles were generally more inclusive, detailed and not promoted to selling a brand or range.

In fact it didn't take long to find the (in)famous article on 'screw' armies and at last I could read all the articles on the ACW campaign held using maps of Ireland. 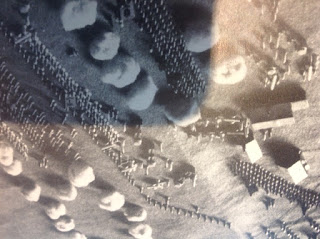 (can't understand why this is upside down! sorry)
Of course the late Peter Gilder also started his 'In The Grand Manner' articles in this mag and what an inspiration they were. 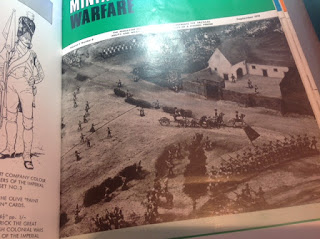 After a busy week doing non-hobby business managed to get some time in.
So finished off some 10mm AWI a Loyalist unit and three units Riflemen so I may just be about ready to play Cowpens!! 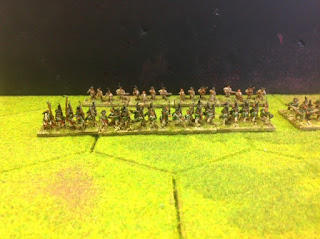 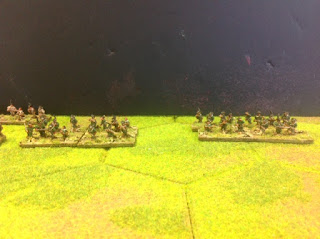 In addition I got a unit of 6mm Portuguese done for my Peninsular war ( no photo!)
And whilst on the 6mm front thought I'd take a couple of pics of a 6mm Union force I acquired not so long ago - just need a few more and some rebs 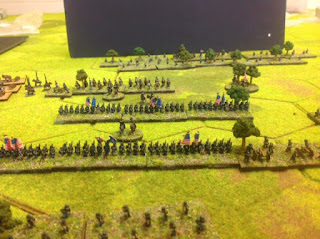 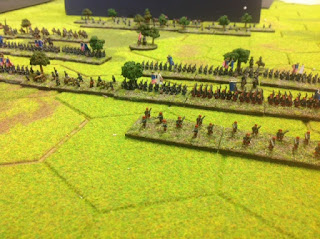 On the bench are the 28mm Scots Fusiliers, half are just about finished and the second half started. 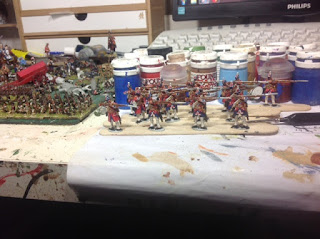 The Gangs of Rome game from Footsore Miniatures due out in January looks interesting so I've done a quick climb through the lead mountain and found a fair few rebellious Roman civilians and Farmers etc.
Maybe it's time to watch the two seasons of Rome again :)

Going Back to My Roots

Now it may be an age thing, maybe even a nostalgia thing but whilst tidying up and sorting out i began to read through some of the older sets of rules I possessed, most are reprints in order to stop the originals falling to pieces but whilst doing so I began to realise how much I enjoyed playing them and that in many ways they were still good rules.
Ok a little more work in scenario setting etc than you get in some of the modern stuff but overall still good fun.
SO here's a teaser of some of the rules I'm going to give a run out again, 1685-1845 is for my 20mm Napoleonic, as in terms of the War of the Austrian Succession/Seven Years War there's still none better than Charles Grant's The Wargame. 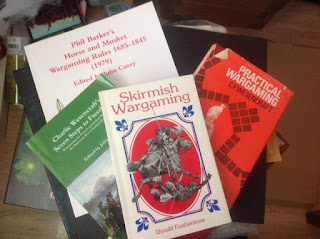 I still think Charlie Wessencraft was missed and under rated. The Seven Steps to Freedom is a great read and loaded (27 I think) with scenarios. The rules are for the AWI/French Indian Wars and are updated from the original set.

So there we have it retro mode. But not in terms of figures I haven't quite succumbed to finding the original Hinton Hunt and Bill Lamming figures, that's one thing the modern day hobby has got right.