Well i know its Friday but I didn't want to create too much confusion and I was at the club last night still trying out DBA 3.0 ( Big Battles) - My Classic Indians scraped a very narrow victory against Steve's Scythians but that's two victories out of two games played I have to admit quite enjoying it.

You will see the West Wind Macedonian army has started to take up a corner on the workbench.
So this week I've finished the first squadron of British Dragoons and the 8 highlanders - they are gloss varnished awaiting the scenic base and the matt varnish.
The Royal Ecosse should be completed soon, more 15mm Sudanese are about finished and the two dragon Sudanese Leigh gave me are awaiting a white dry brush to lift the detail and then a start.
Been a busy week but progress is ongoing.
Want the R.E. finished and then I will start on the Manchester Regiment. 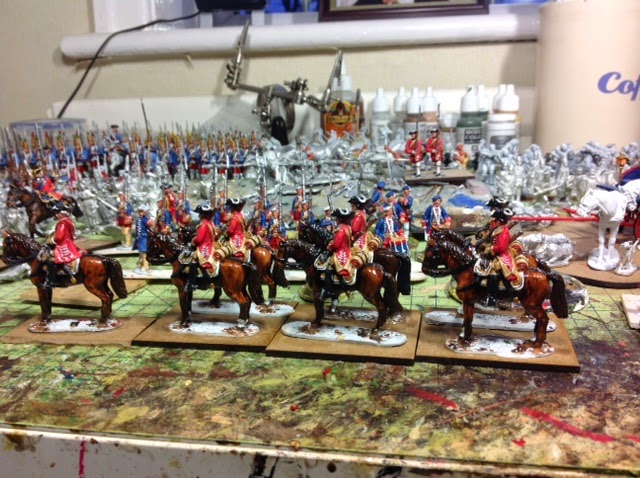 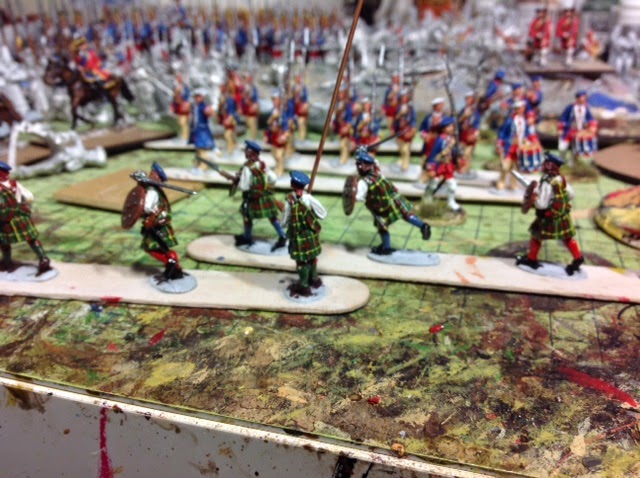 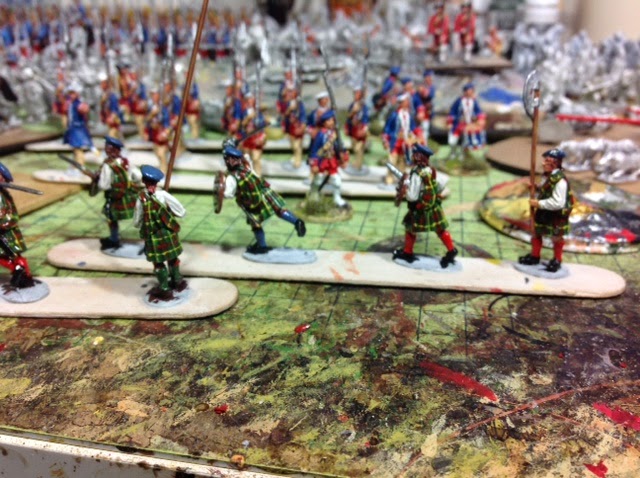 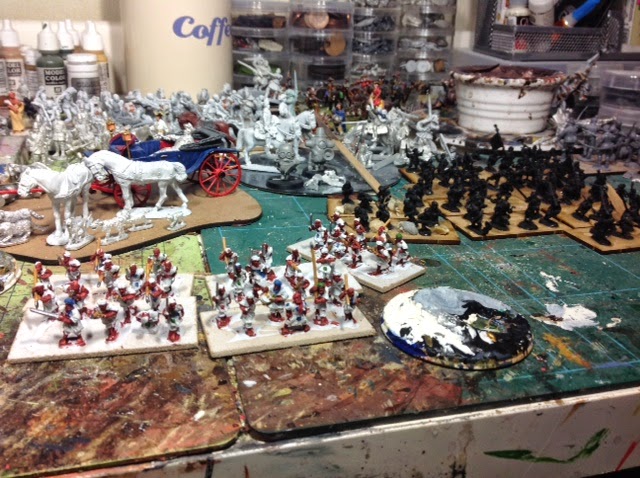 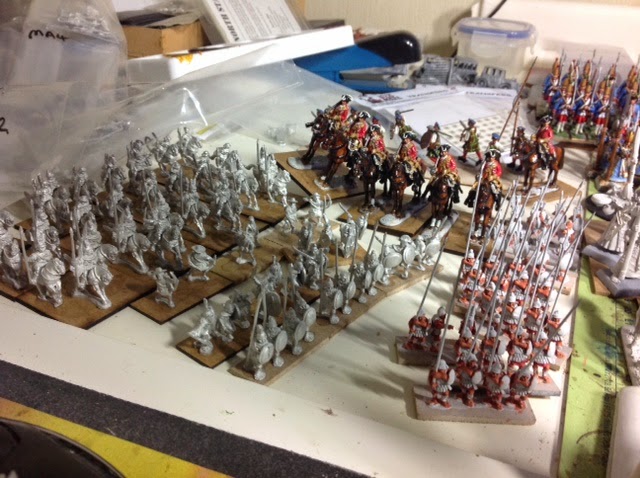 Whilst I've posted the pics on thee Crann Tara Blog thought they were too nice not to post here!

The first 3 Battalions complete to form the First Brigade of the front Line of Government troops at Culloden.
3 More firing line units to do for the second brigade.
The Royal Scots still have the old standard which is soon to be replaced. The others are from Iain at Flags of War. 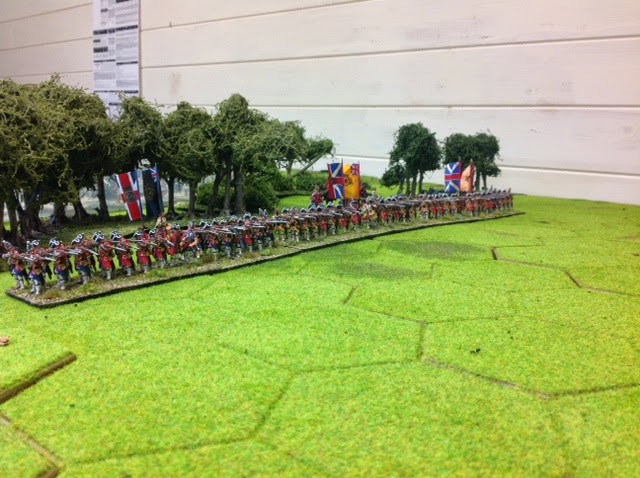 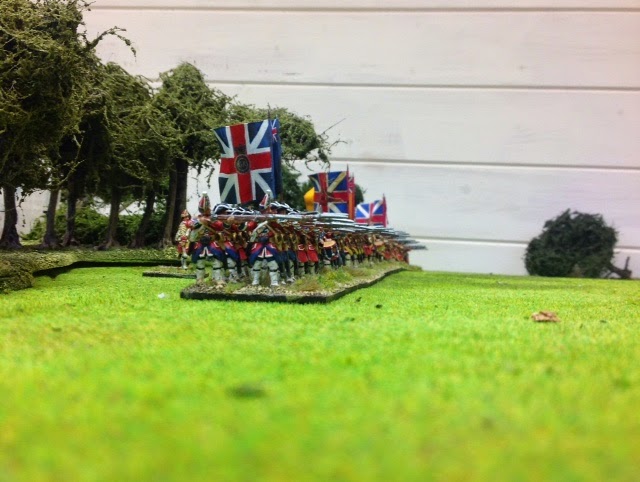 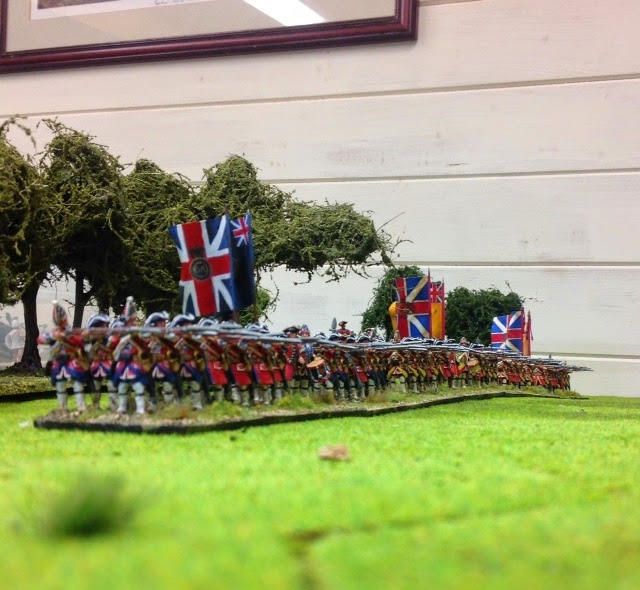 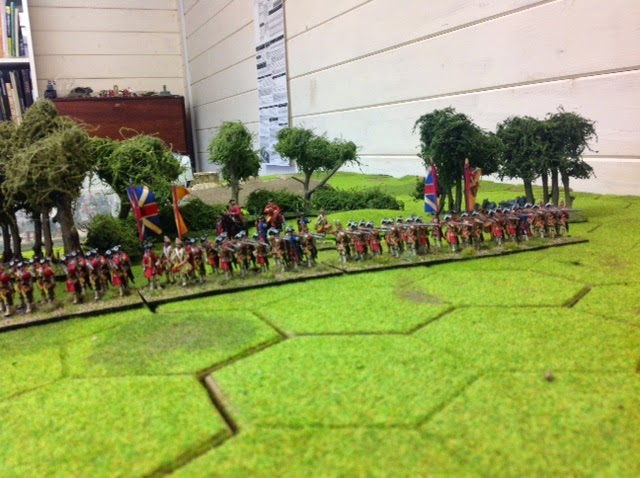 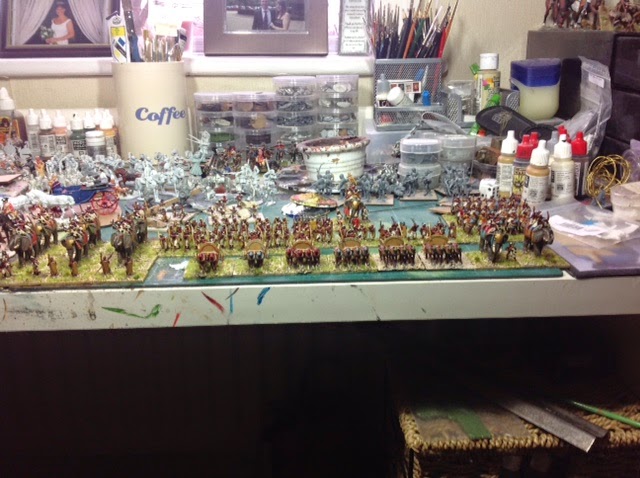 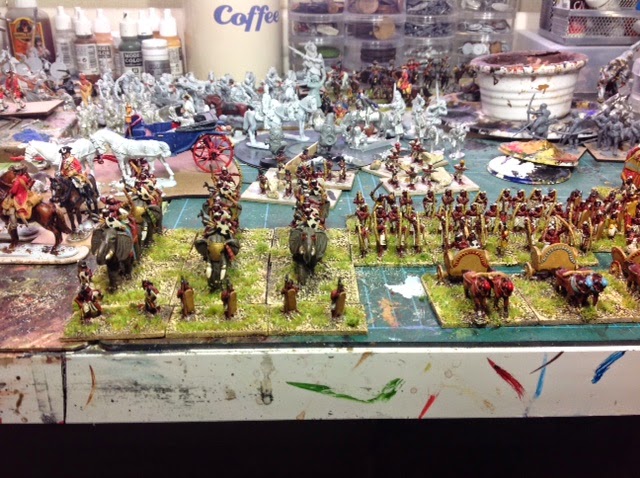 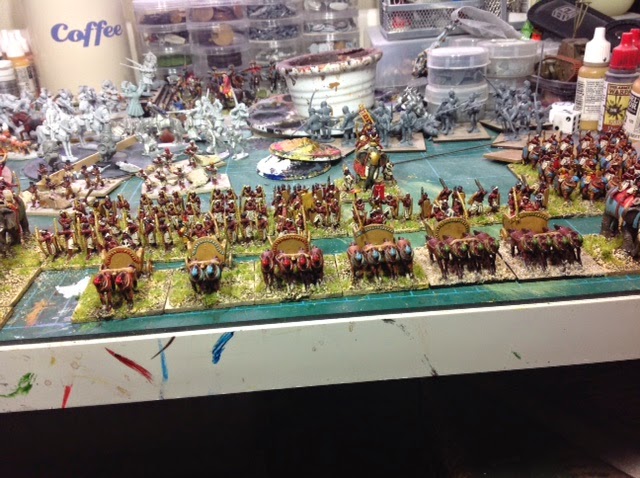 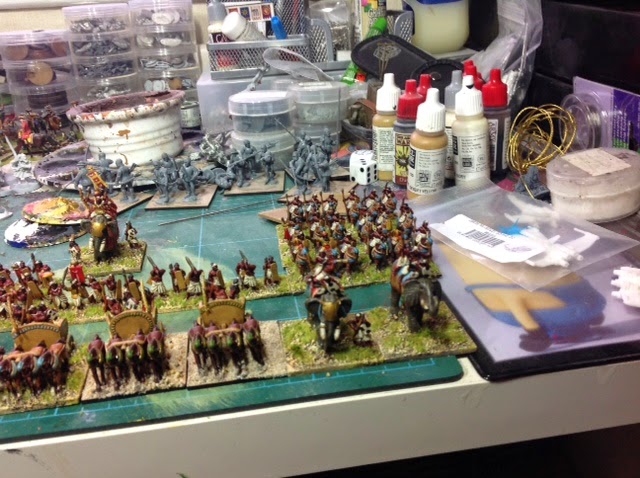 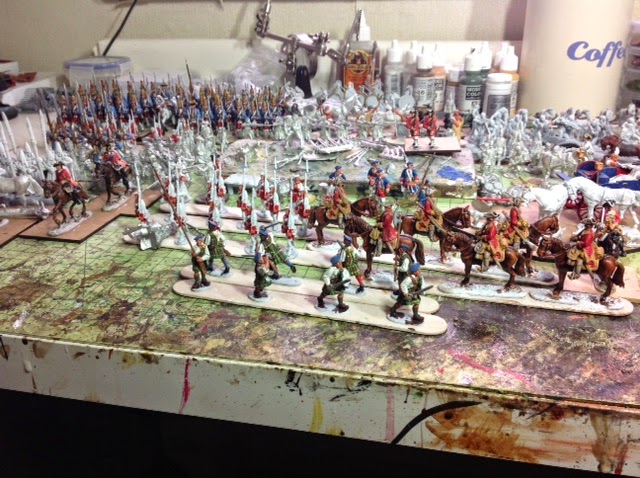 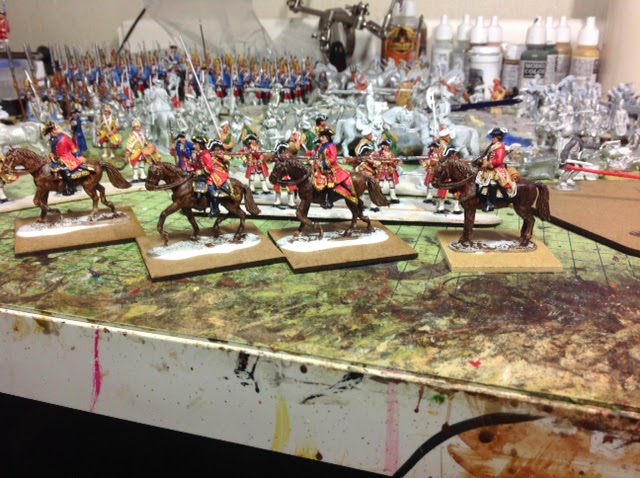 Belated Happy New Year to everyone.
One of the ways I have decided to a) increase the number of entries I make and b) ensure I make progress is to try and do a weekly update of what's on the work bench!! 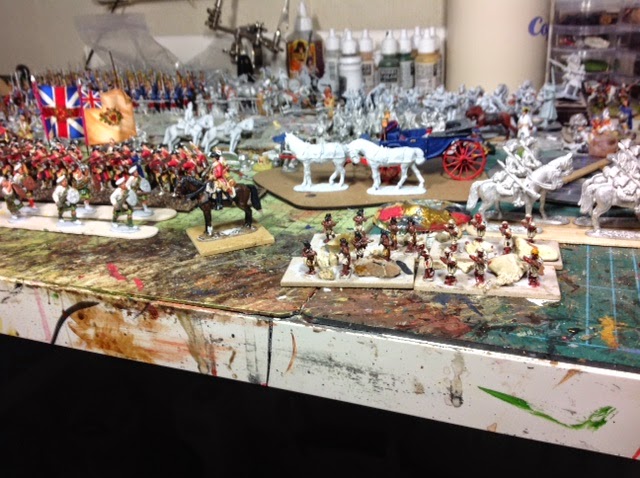 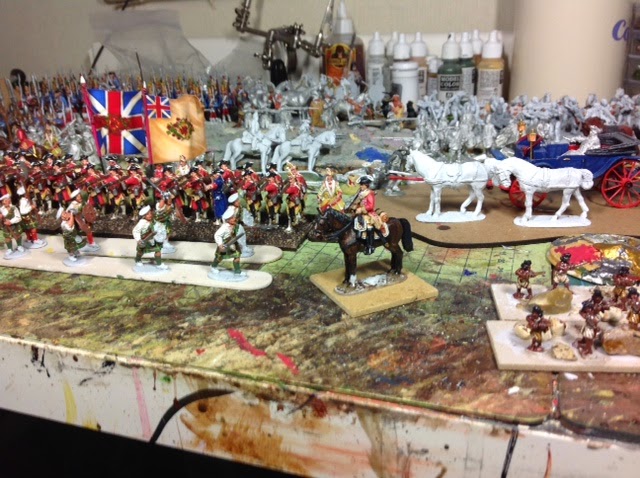 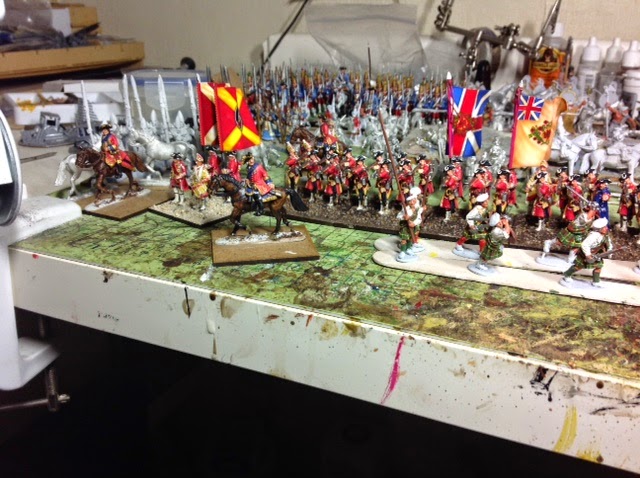 My somewhat stacked out bench - The 14th Foot are just awaiting their bases to be completed, their Albion standard is also visible.
8 more highlanders are under way.
4 bases of skirmishers for the Sudan await bases to be done - off camera 10 bases under way.
In the background the Westfalia Landau is stuck as I work out who is going in it.
So as usual full of busy.