A couple of weeks a go I was extremely fortunate to be invited to Charles Grants for the weekend to take part in his scenario on the Battle of Fontenoy - focussing on the action between Fontenoy and the Redoubt D'Eu.

I was to be the Duke and John Dougan played Marshall Saxe, Charles was Umpire, advisor and all round genial host.

I had read accounts of the battle and the refights Charles and various other individuals had played, a tough nut to crack for the Allies but I cam up with a plan that didn't appear to have been tried before.!!
Early pics show the wood of Barry in the foreground - occupied by the Arquebusiers de Grassin, (Willie figures on their last outing) 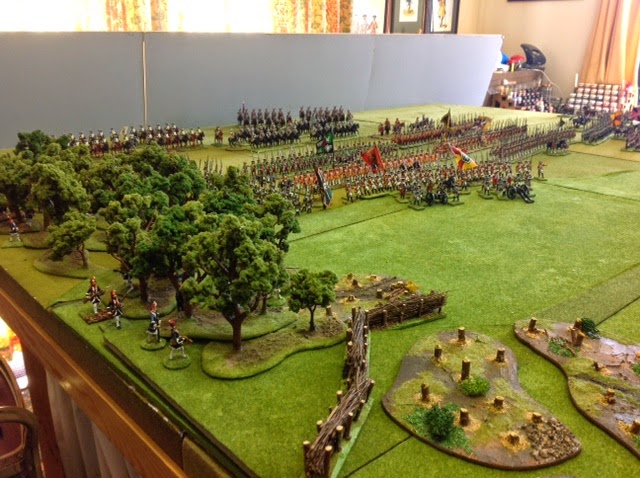 In this pic you can see my Highlanders about to enter the wood supported by another regiment to their left, the Arquebusiers gave ground stubbornly and over the course of the battle suffered the war of attrition. 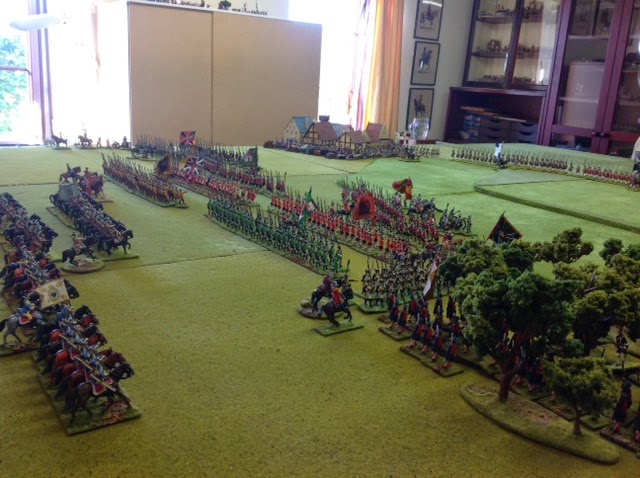 The French Line that I could see, the redoubt in the foreground and Fontenoy in the distance between the two the Royal Ecosse and the Grenadiers de France 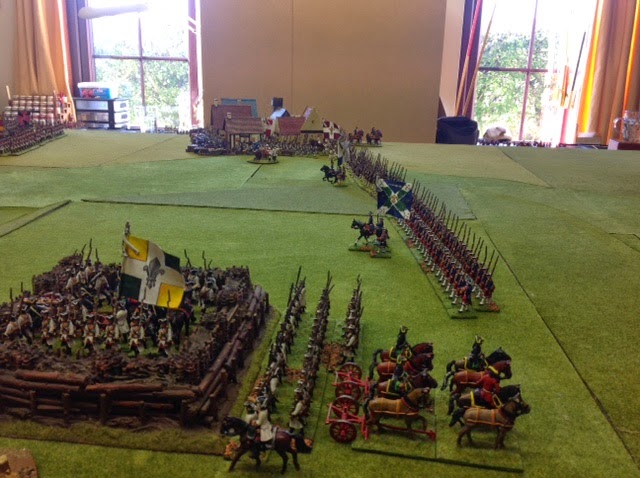 My plane for what it was worth was to advance the infantry attacking the two strong points in doing so the infantry would open like swinging doors and allow the cavalry to come through and engage the enemy infantry and cutting off the French reinforcements from supporting the strong points.

Like many plans this one worked in parts, the assault on Fontenoy was bloody and stalled and repulsed, the gun I had provided to support the attack failed to damage any of the buildings over the whole course of the battle although it did manage to put out of action one French gun but only after all my infantry had been repulsed.

The attack through the wood worked well, the Highlanders drove out the Arquebusiers and eventually forced them to fall below 50% and thus retire from the field. Thus allowing the Highlanders to leave the wood and prepare for the assault on the redoubt.

I had advanced two guns to support the attack on the redoubt and these served the allies well, together with infantry support they eventually silenced the two guns in the redoubt and caused the regiment garrisoning it to retire from the strong point, at the same time my cavalry had come through the center and attacked the regiment supporting the redoubt.
My cavalry attack on the Royal Ecosse and the Grenadiers was not the success it should have been, the cavalry attacking the Royal Ecosse were met by a vicious volley and the survivors made contact - though not riding many down. Two more squadrons supported and broke the Ecosse, the pursuit was ineffectual and the spent cavalry fell back to reform and rest.

The Grenadiers doggedly refused to break until three rounds of melee had been fought and even on the break and pursuit my cavalry insisted on using rubber swords!!!.

Both Johns units were still over 50% and managed to rally. 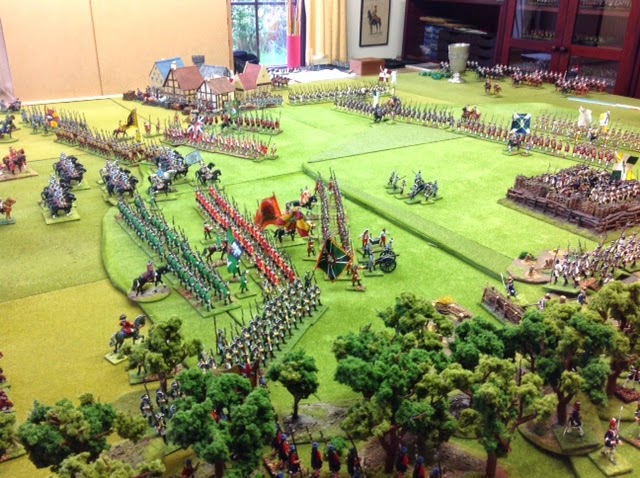 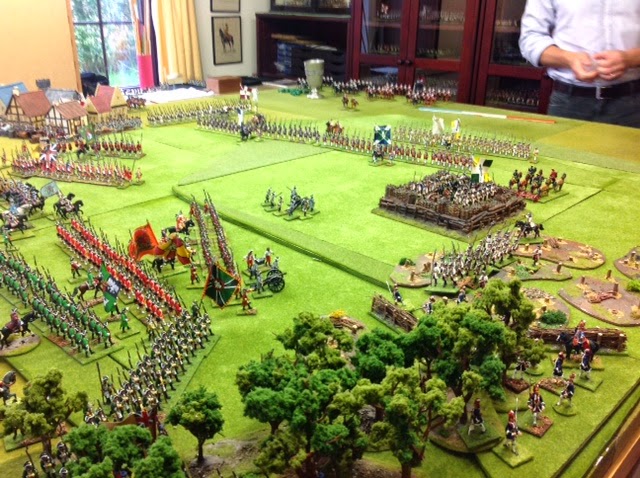 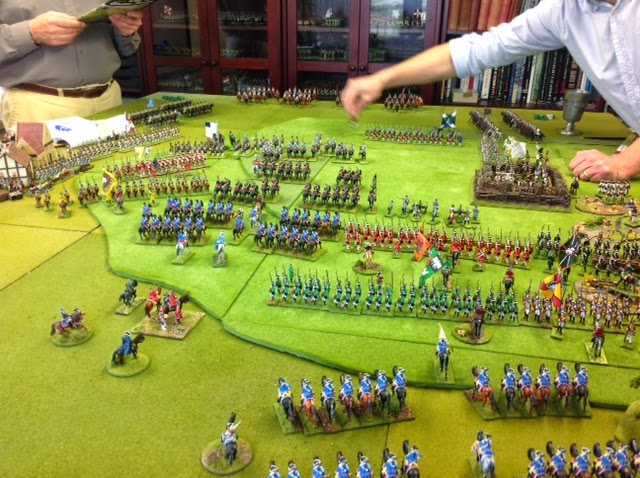 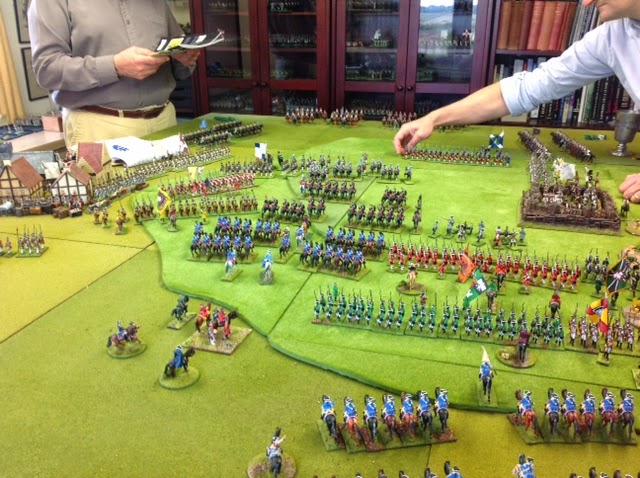 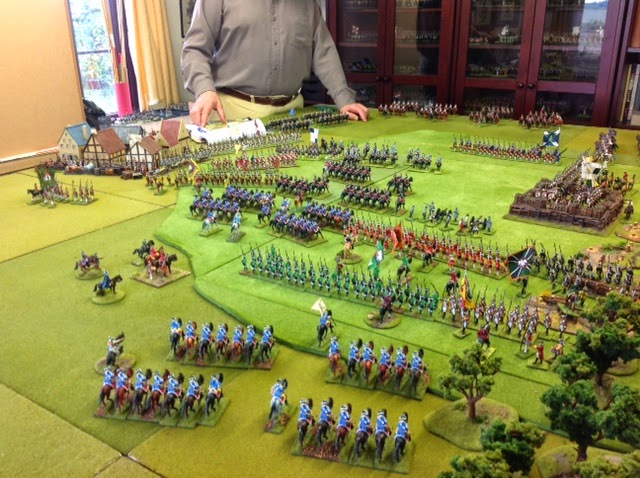 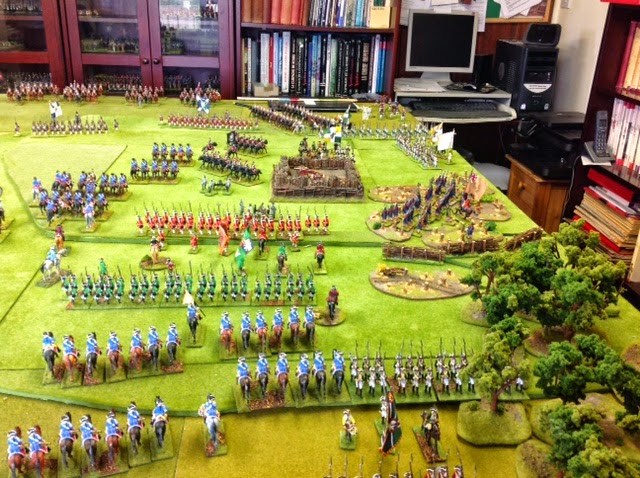 These pictures show highlights of the battle, the final one being the allied high water mark!!
French reinforcements were arriving and the Allied infantry were spent.

In deed a tough nut to crack, John quite rightly played a sit back and see, reacting to the Allies, he didn't get sucked into the centre by using his cavalry to counter attack so well played.

A game I would relish another go at.

A big thanks to Charles and his wife Liz for being such charming hosts and this game will certainly go down in my most remembered gaming moments.

Thought it was about time I posted a couple of pics at my progress on painting my chaps.
Two regiments of the front rank of Culloden are complete, the Royal Scots and the 34th foot. 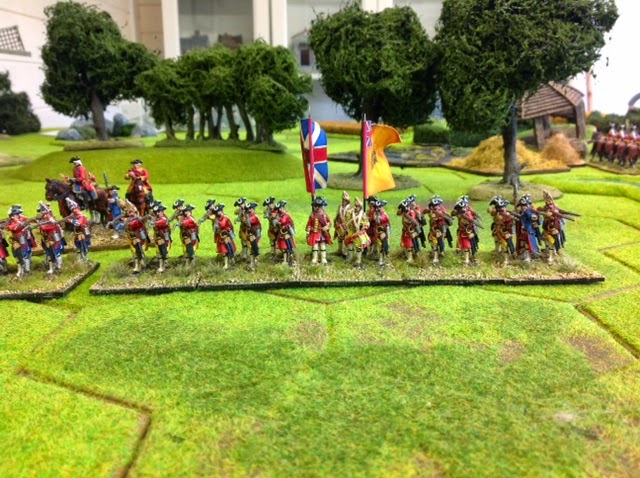 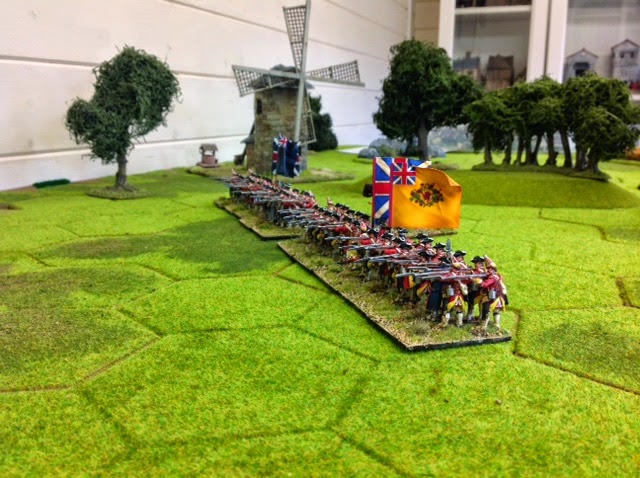 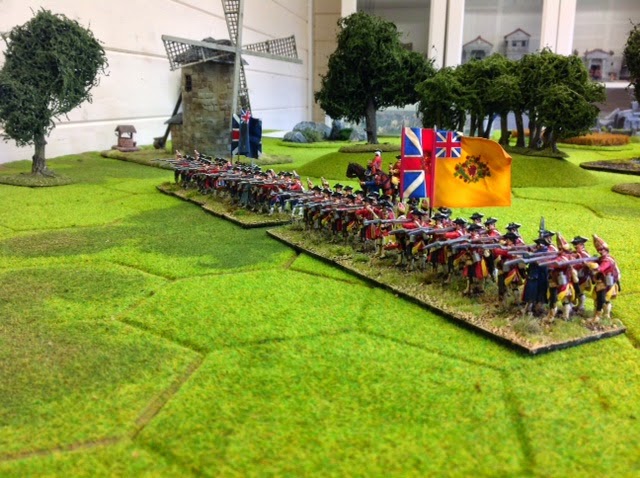 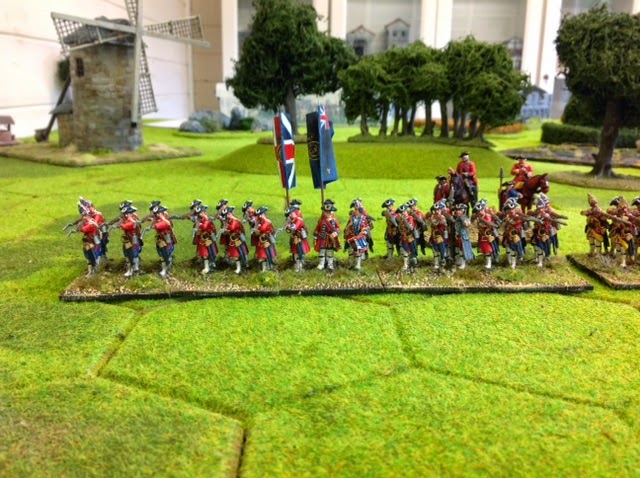 There will be six regiments of foot in the first line and all will be this pose. Figures are mounted on 45mm x 50mm bases which will be my new standard size base moving forward. For the Albion forces replacement command bases are being prepared.