You will all be aware from previous comments that the success of Crann Tara has brought with it it's own problems for me, mainly the increasing demands on my time and also the ability to keep creating new product.

Dave Ryan the owner of Caliver Books ( https://www.caliverbooks.com) came to the rescue with an offer to buy the business and continue to take it forward, so as from the 1st July Dave/Caliver will take over the running of Crann Tara.
All orders up to the 30th will be processed by me and I ask ( if you can ) that you don't place any orders today (30th June) as a lot of work has to take place to prepare for the transition.
All my stock and moulds will be delivered to Caliver shortly but in the meantime continue to place orders as normal from the 1st and keep your eyes open as I know there are a lot of new releases coming very soon.
It has been 9 years since Crann Tara was created and it feels a bit like your child leaving home and the journey with many of you has been a good one. Thankyou for all your support and helping me develop this dream.
Finally I will still be selling Ratnik Miniatures they have gone for casting at Griffin they will be available to pre.order from my colleagues shop here https://www.gamingfigures.com/.../Ratnik-Miniatures-18th... from today.
So at last I will be able to paint more of the figures I’ve made and complete the demo games Ive had planned for the last few years.
Many thanks everyone.
If you have any questions don't hesitate to get in touch
Posted by Graham C at 10:30 8 comments:

I received  my copy today of the latest in Charles Grants series of  Refighting History, published by Caliver books.

The second in the small actions series this has 8 challenging scenarios which are a great change from set piece actions. Charles uses his own rules with suitable tweaks but the actions are easily adapted for Sharpes Practice etc. Also included is a piece on the rules updates for The Wargame ( It would be nice if Caliver made this section available as a PDF).

Full of nice pictures especially showing off a lot of my figures 😁.  Worth buying. 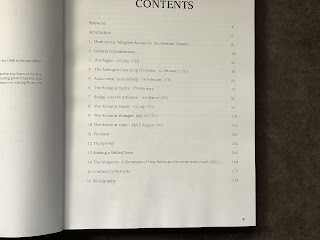 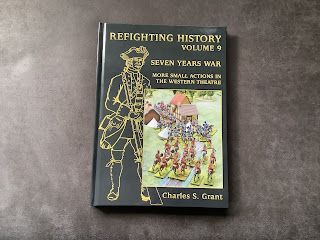 I also received the first set of what is to be a series of 18th century civilians from Igor Karpov (Ratnik Miniatures)  these are superb. I’m also pleased to say that Igor is allowing me to get the figures cast in metal and be sold as an alternative to the resin casts. Information on pre.orders will be made available next week. 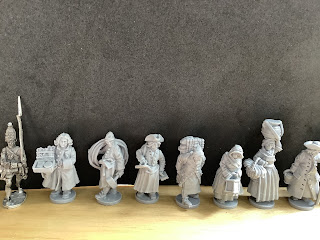 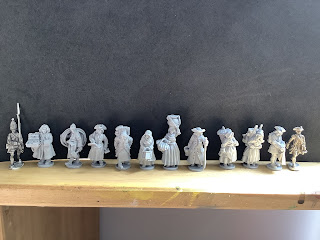 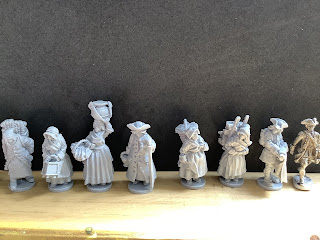 Having arrived back from a few days walking in Scotland I’ve seized a few hours this afternoon to catch up on some admin etc. Whilst doing so thought I’d watch Waterloo (again) seeing it’s the anniversary.

This is the special blu ray release (picture quality very nice) which has a few extras - documentary on the making of the film ( pretty good) what I believe is an isolated music and sound effects track ( not listened to) and some other bits I’ve not checked.

There’s also a booklet which is a copy of the original brochure ( mine fell to bits years ago), a poster and lobby card prints all good stuff to remember when this was released. 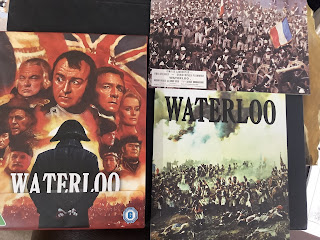 Whilst this was playing I also set the printer off to print the first four CSA ironclads - left to right, front to back Albemarle, Arkansas, Atlanta and Baltic - far nicer looking than the Union ones I think 😁 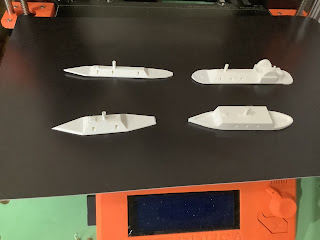 I always find that naval battles quite often provide a suitable diversion from large games, generally quick to set up and don’t always need a large table. I have 1/1200 and 1/600 Napoleonic ships but as with many things always on the look out for other diversions! [ not that I need them) 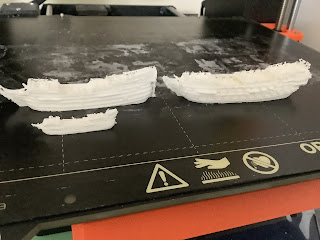 It didn’t stop there thoughDavid Crook on his A Wargaming Odyssey blog has been making some excellent ACW ships using bits he had Martin at Warbases use for him, he’s had a couple of test games working on a set of rules by Bob Cordery with some tweaks which are looking very good.

Again it reminded me I’d downloaded 3 sets of files from Thingiverse for ACW ships.

The first set I printed are all Union Ironclads and masts need to be done for New Ironsides but they’ve come out not bad. Again these are scaled at 1/600 but could be made larger or smaller!

I will print a few Confederates and they should be quick to paint! 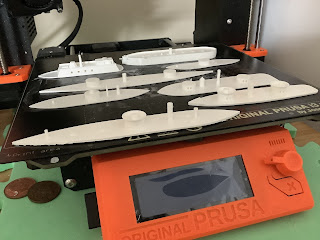 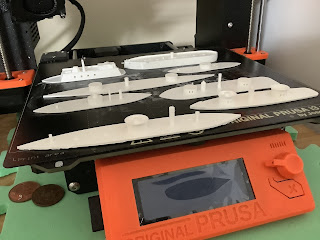 Well thought I’d show a quick shot of the real bench and not the side bench I use for basing, finishing off etc.

I realised I hadn’t done Sempills (25th regiment) foot for my Culloden army! An extreme oversight so a unit undercoated and started.  I paint the units as a full regiment so 30+ figures in one go. That’s why there's other bits and pieces on the bench a) to break the monotony and b) to allow some shades to try before progressing.

The Newline design Nassau were pieces I’ve had for a long time and just fancied doing them - the 20mm figure really is, I think, the perfect Wargame scale in retrospect I should have done my whole range in this scale 😆 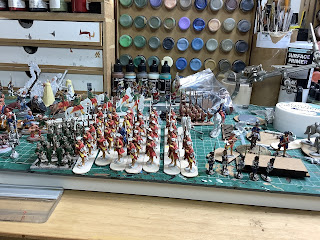 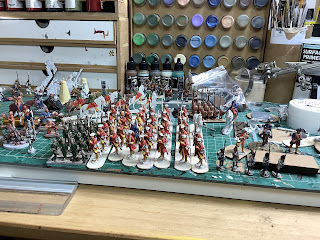 I hope to get the 25th finished over the weekend and then back to the Yorkshire hunters.
Keep safe everyone.

Today I was going to do an update post on my workbench then it was with disbelief and great sadness I read on the Wargames Illustrated page of the unexpected death of Duncan Macfarlane.

Like many in the hobby I have known Duncan for many years and would like to call him friend.

My first encounter with him was when he travelled with Peter Gilder to the old Redcar club to take scalps for the WRG society championship - I would have been around 17 and was confronted by Duncan’s early medieval Welsh - big units of 48 figure welsh spears - almost immovable objects. I lost as to be expected and over all the intervening years I don’t believe Duncan ever lost his keenness for competitive Wargaming.

We met him regularly after that at various shows and from the 1980’s a lot more as Gordon, Lee and I started to put on various demo games, in fact Duncan accompanied us on our hike around Tewkesbury and over Newark for the games that were to follow.

There were many attendances at his house in Lovers Lane at Newark for photo sessions and when accompanied by a sleepover I got very little sleep as most of the night was spent browsing through his vast collection of books.

A knowledgeable, charming and disarming individual he was great company and many a social evening was spent in Newark on our visits. One one occasion when he found I was to travel to London for a conference he encouraged my to travel down the day before to catch up and have a chat. A hot day we visited a number of pubs and somehow on each one we managed to miss the serving times for food..

I don’t recall much else until 5.30 the next morning when I woke in my hotel room still fully clothed and with around an hour before I got the train to London, I managed to shower get changed and make my way for the train. I just about managed to survive the conference after drinking copious amounts of coffee and having breakfast.

I guess in some ways he was mildly eccentric but his very nature made it all very acceptable, when he published Wargames Illustrated he somehow talked me into doing an index both by article and author and after the first 244 issues I decided enough was enough and I think he bought it off me for a couple of pints.

And so the memories continue, Warcon, Sheffield Triples nights out and so on - his wit, was regularly missed by many and it’s so unfortunate that many gamers of today will be oblivious to the contributions and changes he has made to the hobby. Even possibly the instigator of having the hobby accepted as a mainstream pastime with the publication of Miniature Wargames. 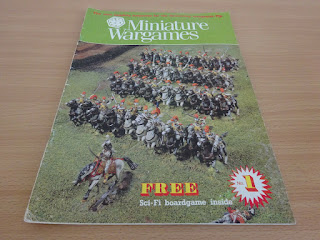