Reinforcements have arrived, a short review and to come

First and foremost a very Merry Christmas to my followers and those that occassionally pick up on the blog. 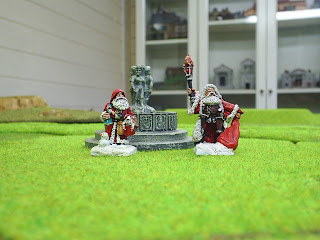 These two Santa's have been with me for a number of years, on the left is a Foundry figure and on the right a bit more of a 'tooled' up Santa, a GW Mordheim figure which I played with.
But here's hoping Santa is kind to you all and brings you evrything you hoped for and that 2013 allows us to attack out lead mountains and take up new projects like there's no tomorrow.!!!

In a moment of weakness I did purchase rather a lot of painted figures from a chap in Edingburgh, this has resulted in the Duchy of Comyn and the Royal Albion forces receiving some unexpected cavalry reinforcements. Over the festive period I hope to rebase, touch up and prepare them for some action in the New Year. 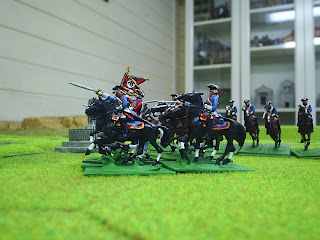 These chaps are Holger Erricson figures, I need to decide how they will fir into the Albion forces and amend accordingly. 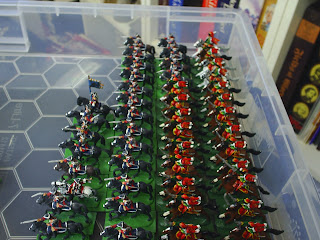 These chaps are Spencer Smith Metal figures, a regiment of Cuirassiers and a regiment of Hussars- not much needed here but basing and standards and a bit of tidying up.

I also bought some infantry but on reflection they were purchased in a moment of madness and in the New Year I think I will be looking at selling them.

Over the year I achieved 956 painting points which was quite good, a target which I aim to blow apart in the coming year.

I stuck to the painitng plan until around August when I got a little derailed but it seemed to work most of the time and I will draft another out shortly.

As to next year, it goes without saying that the Imagination will be a core part of the painitng programme, I would like to return to the Zulu War and press on with my 28mm Magnesia project.

In 15mm the end is in sight for the Italian WWII Desert war army and the British will shortly follow.

In 10mm my DBN Austerlitz project looks like it could be completed with a small push.

The projects that just happened and for which I didn't plan----20mm.

I somehow found myself drifting on a sea of nostalgia and buying Les Higgins Marlburians, Tumbling Dice ECW and Newline design Napoleonics.

On some levels I ask myself why did I ever leave the 20mm scale.
Anyway the upshot is I want to do Edgehill using the Tumbling Dice figures and look at doing a DBN Quatre Bras using the NewLine Design chaps but on large bases.

Let's see how it goes, ( and I didn't even get round to mentioning a return to Middle Earth and some sci-fi adventure) !!!!!

All the best and take care.

Game Centre up and running

Well the 8th of December saw the Game Centre formally open, a Warmachine tournament had been arranged by some chaps from Sunderland and Newcastle. Whilst I don't pretend to know anything about the game they all appeared to have a good time.
The pictures below are the before and after, the first is at 8am when I arrived to open and get the place warm, the second is the tournament in full swing. 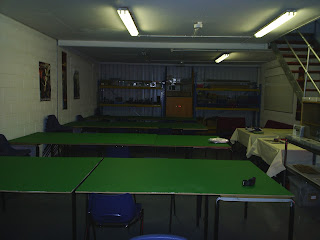 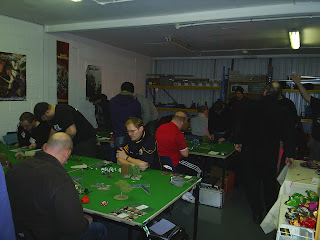 We also had some tables spare which were quickly snaffled by some 'Malifaux' players (don't know much about that either!) and some Saga players. So all tables booked, and a good day was had by all.

So now I can get back to some painting, I also bought some Holgar Erricson cavalry and metal Spencer Smith Cavalry to get my forces supported. They need a little touching up but I will post some pics soon of them and start to prepare for the next Scotia Albion battle.
Posted by Graham C at 12:34 No comments: