What a great week!

Well if this is retirement roll on, whilst I appreciate I may be in a bit of a honeymoon period it has been a very enjoyable week.
Tuesday and Thursday night saw me start a Punic Wars campaign with two of my colleagues at our two local wargames club, Im using an old SPI game to run the campaign and generate the battles, interestingly already it hasnt gone as I expected. The Carthaginian player - aggressive on the table top has been somewhat reserved and in his first two battles has been bettered by his Roman counterpart. The result is at the end of the first year Hannibal is still in Gaul!. 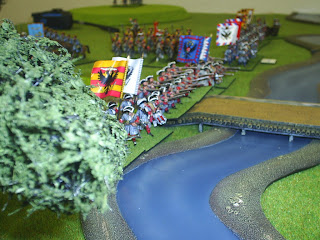 Friday afternoon saw another of my colleagues bring his much underplayed Marlburian collection, we had a great game in the cabin following a Charles Grant Scenario of Seizing a bridge. We used th Beneath the Lilley Banner rules, good fun apart from the fact I regularly failed to move any of my men due to bad command rolls! As the French player I lost. However I did learn a salutory lesson always read the scenario guide thoroughly, the river I classed as unfordable except at the bridge, not so its fordable at both extremes!! Would it have made a difference? I doubt it. Any way pics show various stages of the game. Below is the French main force advancing on the bridge and the Inn! 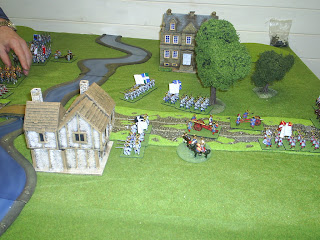 Allied army deploys and advances to the river 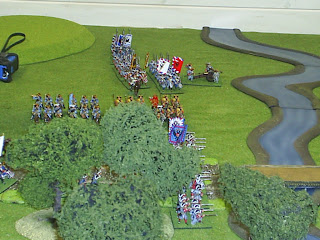 Below is a shot of the allied right flank and centre at the topis the battered French Infantry retiring. 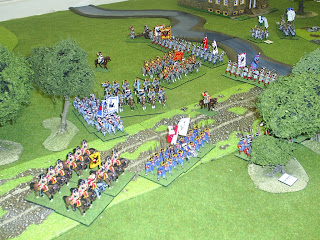 Below is the French flanking force to Regiments of Irish and one of Swiss, together with some Dragoons. They made good progress until I failed to activate them which gave the allies time to reorganise and unleash his heavy cavalry, nuff said! 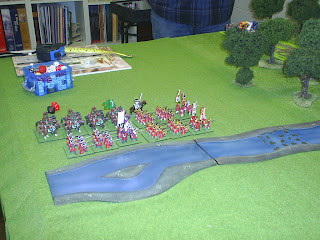 In addition to all this a quick tally shows I've almost painted 100 28mm figures this month and my Royal Albion foot continue to make progress, below a couple of better pics of some of the lads outside the entrance to the Coaching Inn, The Black Horse and the Cherry Tree! not very original I know but I love the song. 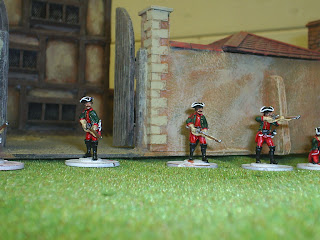 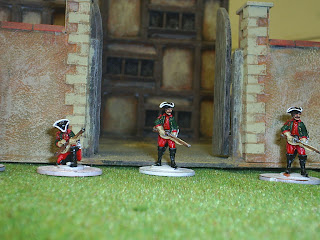 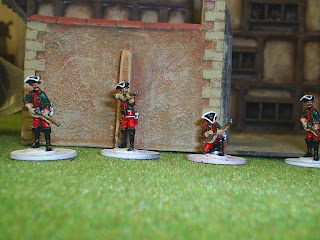 The second company is almost done and I can hopefully complete the third including doing all the bases before month end.

Dont know where this week went, lots to do around the house and some consultation work but progress on the paint table is still taking place. I have undercoated all of the Royal Albion Lights but was determined to try and get at least one figure in what I decided would be their uniform colours. 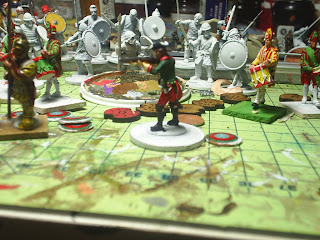 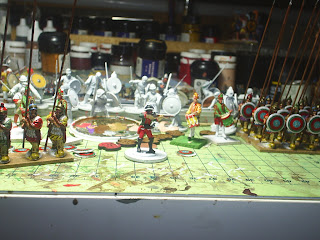 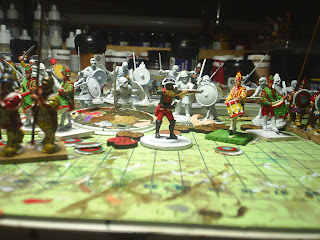 In the background are the drummers I'm finishing for the line battalions, he is flanked by a first corps phalanx Ive almost finished.
I suppose in terms of colours its quite 18th Century Russian but hey its an Imagination and I think the whole battalion will look spot on. See if I can get them done this week.

Whilst sorting through saved images etc. I did find a couple of one of my favourite command bases, it was my Spartan King for the first battle of Mantinae display game. Still got the Greeks and brings back fond memories 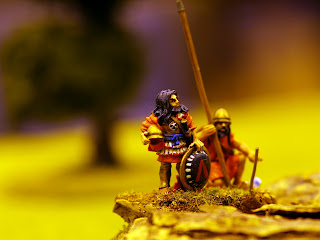 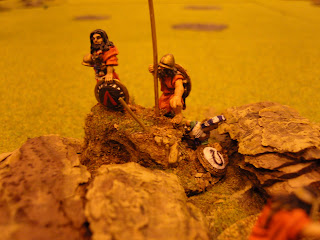 Anyway back to the merlot and the paintbrush with another update next weekend!
Posted by Graham C at 18:19 1 comment:

I trust everyone had an enjoyable New Year and I have seen a significant number of colleagues outline their plans and projects for the coming year.

Like many I don't see 2012 being any easier than last but to me that gives the opportunity to focus on what I have and make some progress, whilst I dont intend to start anything new I know its foolish to say I wont, Sails of Glory and Mongoose Publications promise of resin WW1 ships already get the gaming juices flowing, what I have promised is that it will be a cost neutral year I can only spend what I earn from the hobby so that's the incentive.

My next Regiment of my Imagination is almost complete the 25th Albion Foot just awaits its 3 drummers, I am quite pleased with the progress 16 hat men and the command, standards etc all done over the festive period. 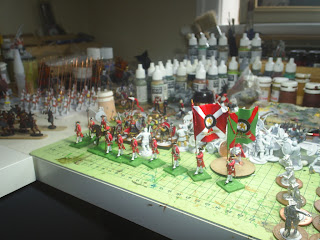 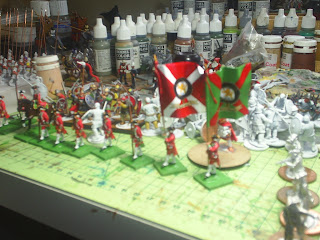 Next up will be the Royal Albion Light infantry under its Commander Rupert Gibb, the figures are assembled waiting their undercoat. 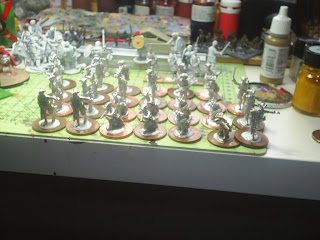 I do feel that now there is the potential for more spare time some sort of structure could now be applied to my painting programme, I always need three or four different units on the table at any one time therefore over the year I have determined that my Imagination and Magnesia project will always be present and being painted.

In addition I've roughed out a time table as follows;
January is clear to be spent clearing whats on the table.
February - Zulu Colonial
March - finish off my 28mm EIR Romans
April - 6mm month (could be finishing off FPW or doing some Napoleonics)
May - 15mm WWII desert
June - Update 28mm AWI. I have figures that need rebasing, touching up and quite a few still need painting.
July - free month!
August - finish basing my 10mm Market Garden armies in the hope of starting a mini campaign in September
September -15mm Ancients.

I haven't gone beyond that as I reckon the above may not go according to plan but its a start.
Gaming wise had my first last night at the local club - Big Battle DBA trying out the new version 3 which I have to say I quite enjoyed even though my poor Roomans received a good drubbing at the hands of the Carthaginians.