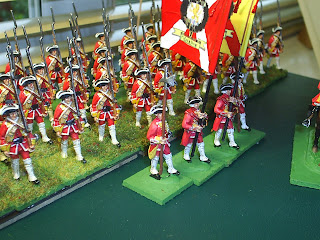 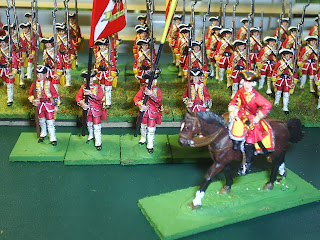 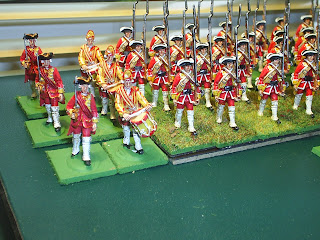 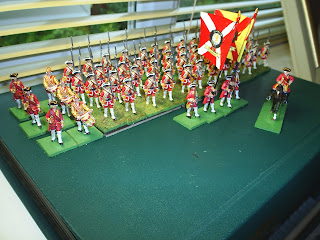 It's been a rather hectic couple of weeks, came back from the 'Peak District' on Sunday having had a bit of a walking hol with my lovely wife and then tomorrow off to France with some of my colleagues on a 'bunker busting' week. We're based in Arromanche having rented Colin Rumfords bungalow (details on the Rapid Fire web site).

Also I signed up to help with Towton 2011, the aim to refight Towton with 25000 6mm figs http://towton-2011.blogspot.com/ the link tells it all. However in the mean time I've managed to press on with the Talisker boys and am almost there.

Finishing touches on the Colonel and the bases of half the Regiment, I've also printed off the Standards and now need to paint over them! but its progress and I didn't want to remain silent for too long.
Posted by Graham C at 17:55 7 comments: 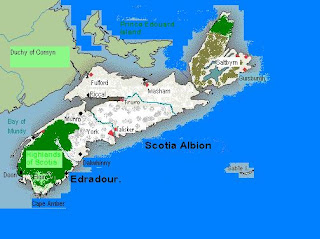 For those that have asked please find above a very simple map of Scotia Albion, detailed areas will follow as the story develops and hopefully armies come to play. But at least it starts to indicate the areas of this land and its enemies. In terms of armies all Regiments are based on those outlined by Charles Grant i.e infantry will be 48 ORs with 3 Officers, 3 drummers, standards and a Mtd Colonel. Its also my intention to use the rules published in the Wargame with one or two minor revisions along the way.
As to progress the Talisker Foot command is on the bench and under way.
Posted by Graham C at 15:51 5 comments:

First many thanks to those individuals who have left encouraging comments. Whilst the painting continues, I hope to start the Talisker command this weekend I thought it may be useful to provide a brief outline of the Grande Duchy of Comyn.

The Duchy is joined to the mainland of Scotia Albion by a neck of land some 50 miles wide, over the centuries the nations have been at war with each other this region has suffered the most, it is subject to an almost constant state of raids and counter raids and whilst Scotia Albion has started to build small fortifications at strategic points along the border no one really expects them to prevent any determined foe.

The Duke, Charles de Comyn has governed the region for the last 5 years, this was following the death of his father at the battle of St. Edouard. A major action in defence of Edouard island following the invasion by the armies of Scotia Albion.

Due to the severity of the defeat Charles has been unable to launch any strong offensive against his enemy or indeed contemplate any form of attempt to retake the island, that is until now.

His Minister of War Phillipe d'Olley has produced a plan which would allow the Duke to regain his glory and his Island. Phillipe, on behalf of the Duke, has managed to secure the support of the King who has promised to send a Regiment of Guard Horse and a Regiment Of Foot to supplement the army.

Head of Intelligence Barrie d'Ilton has sent spies deep into Scoti-Albion with the intent of causing dissent and spreading rumour. One particular success is in the Highlands of Scotia where they have managed to encourage a number of Clan Chieftans to talk of independence, this has gone further where it is suggested that the young Prince Charles has been having secret conversations with these Chieftans and is warming to the suggestion of being the ruler of an independent province.

The Duke hopes that he can create a diversion with a strong raid into Scotia-Albion, this to coincide with an uprising in the Highlands, at the same time being aware of the superiority of the Scotia Albion fleet he would aim to land the main army on Edouard Island and retake the Island in a swift and decisive campaign.

Like all plans it sounds good, now was the time to raise the forces and bring that fat King to his knees.
Posted by Graham C at 10:22 10 comments: