Skirmish at Saltbyrne - a Donnybrook experience

Well after almost 4 weeks from having the table set up I eventually found the time to run a solo skirmish game using the Donnybrook rules, this was the first time I'd used them. In essence each unit/ character has it's own chit which are drawn at random to determine order of play, the unit can do the usual move, fire etc.
In addition a reload counter is placed in the mix, once a unit has fired it can not reload until the chit is drawn that bound or some time in the future. There is also an end of turn counter which means not everything may get its turn each bound.
Depending on the rating of a unit determine the type of dice it throws Elite D10, drilled D8, Militia D6 and scoring a hit etc is usually a 5+
There's also modifiers for cover, saves for characters, weapon types etc.
The scenario;-
The village of Saltbyrne lays close to the borders of the Duchy and Scotia.
Reports have come in that Alastair McPherson Chieftain of that clan and principle spokesperson of the Highland clans is in Saltbyrne to meet with an emissary from the Duchy Of Comyn and to purchase arms and powder.
Richard Stark, King George's leading spy and spy catcher has raised some of the local garrison and is on route to intercept.
The Scotia forces were randomly deployed in the village other than McPherson and his 4 man bodyguard who were with the wagons at the rear of the Cock and Bull Inn.
Two units of highlanders were deployed, one ended up in the yard with the Chieftain, the other at the rear of a warehouse further down the main road.
Barrie D'Ilton was deployed with McPherson. D'Iltons aide 'The Ferret' was with a group of local thugs in the grounds of the timber yard covering the North Eastern road.
No Albion forces were on the game Board, when an Albion chit was drawn they would be diced for to see which road they came on.
The Albion forces consisted of two units of regulars a unit of grenadiers. One unit was accompanied by a drummer +2 on Morale and an Officer. Stark accompanied the other unit of regulars and his man servant Ferguson Fiddler was with the Grenadiers. 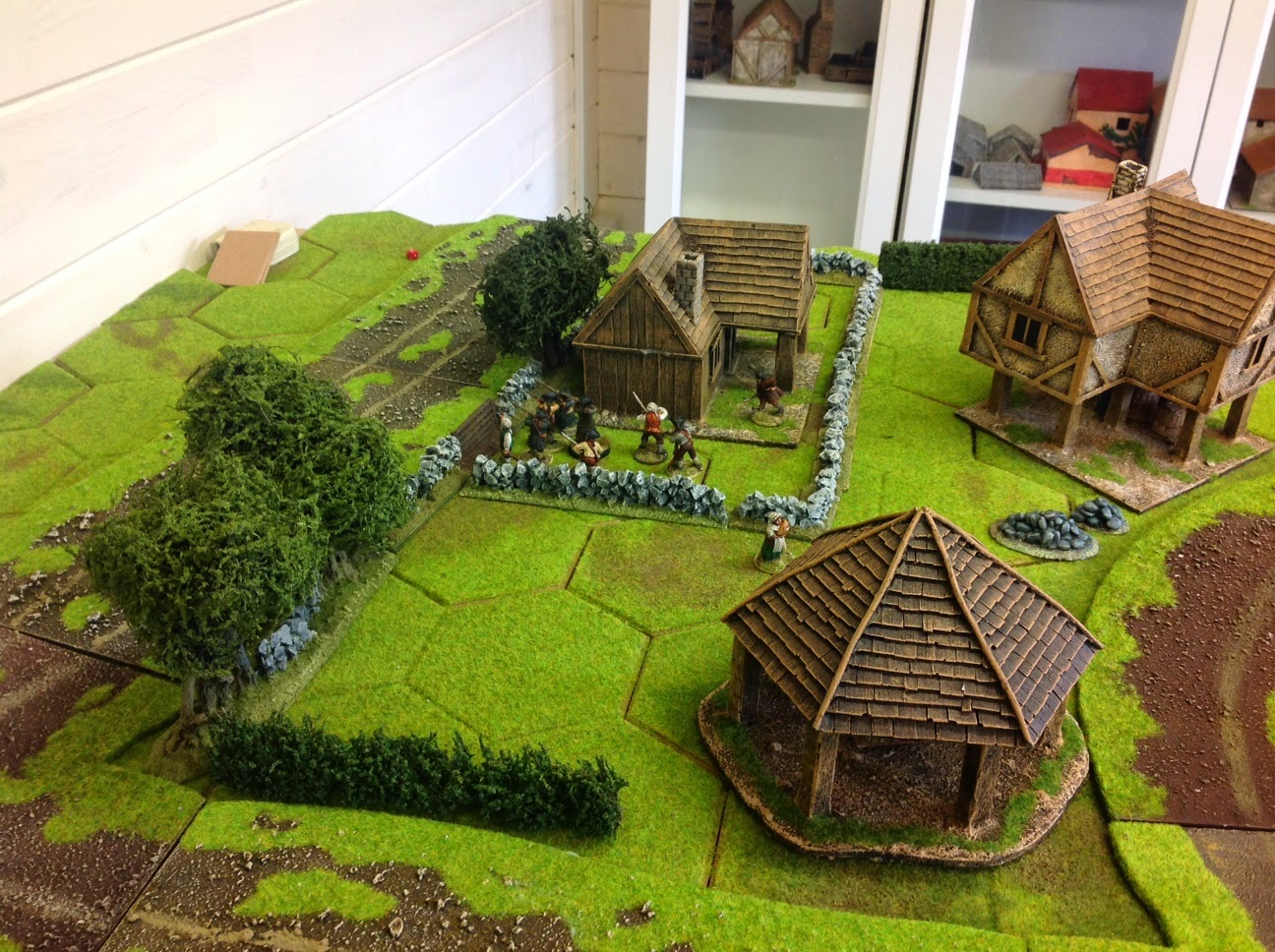 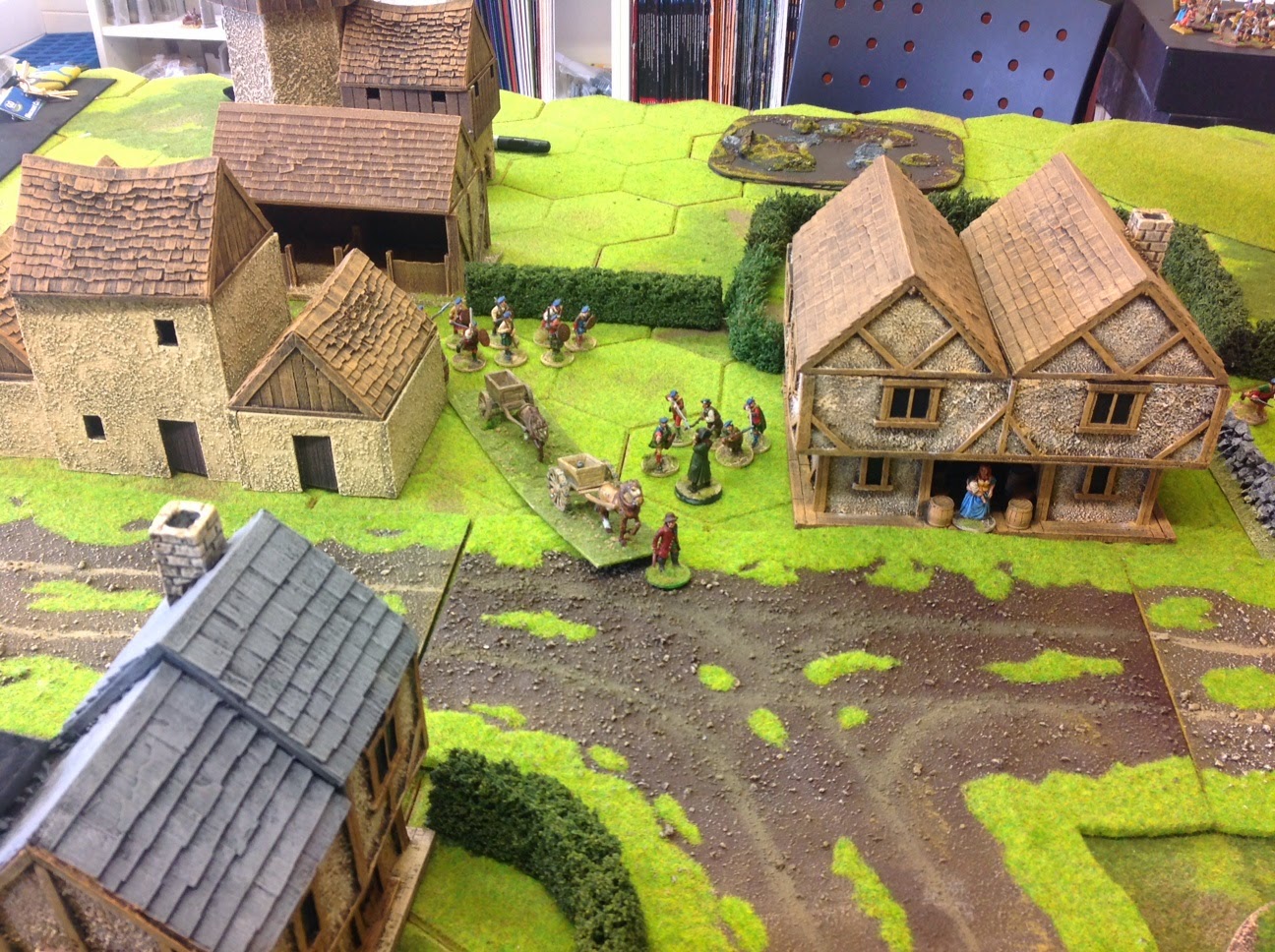 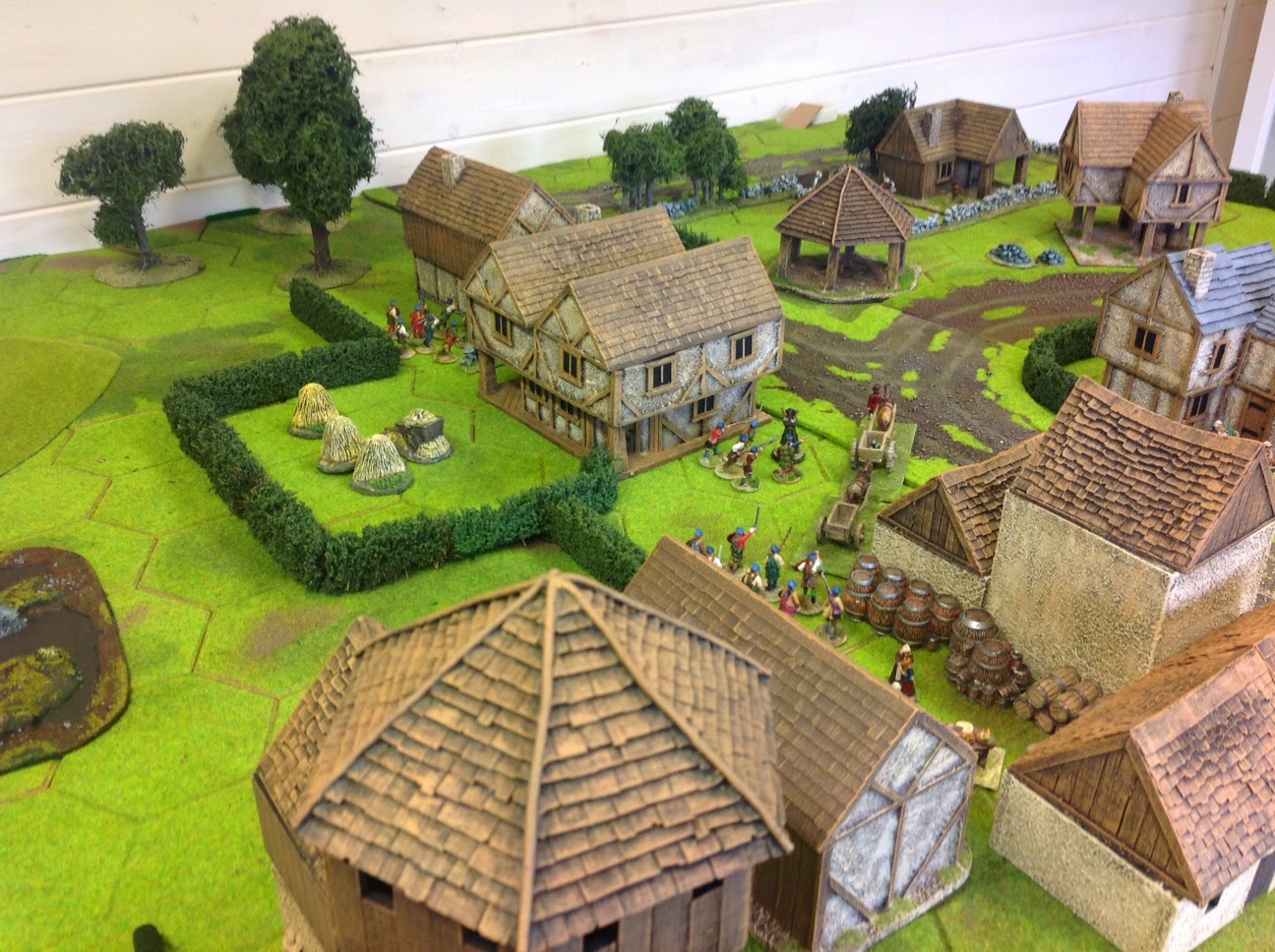 Turn 1 saw all the Albion forces arrive before Scotia forces could move. Each unit successfully arrived on a different road, D'Ilton ran across the court yard and fired his pistols and missed. The wagons set off and the bound was over. 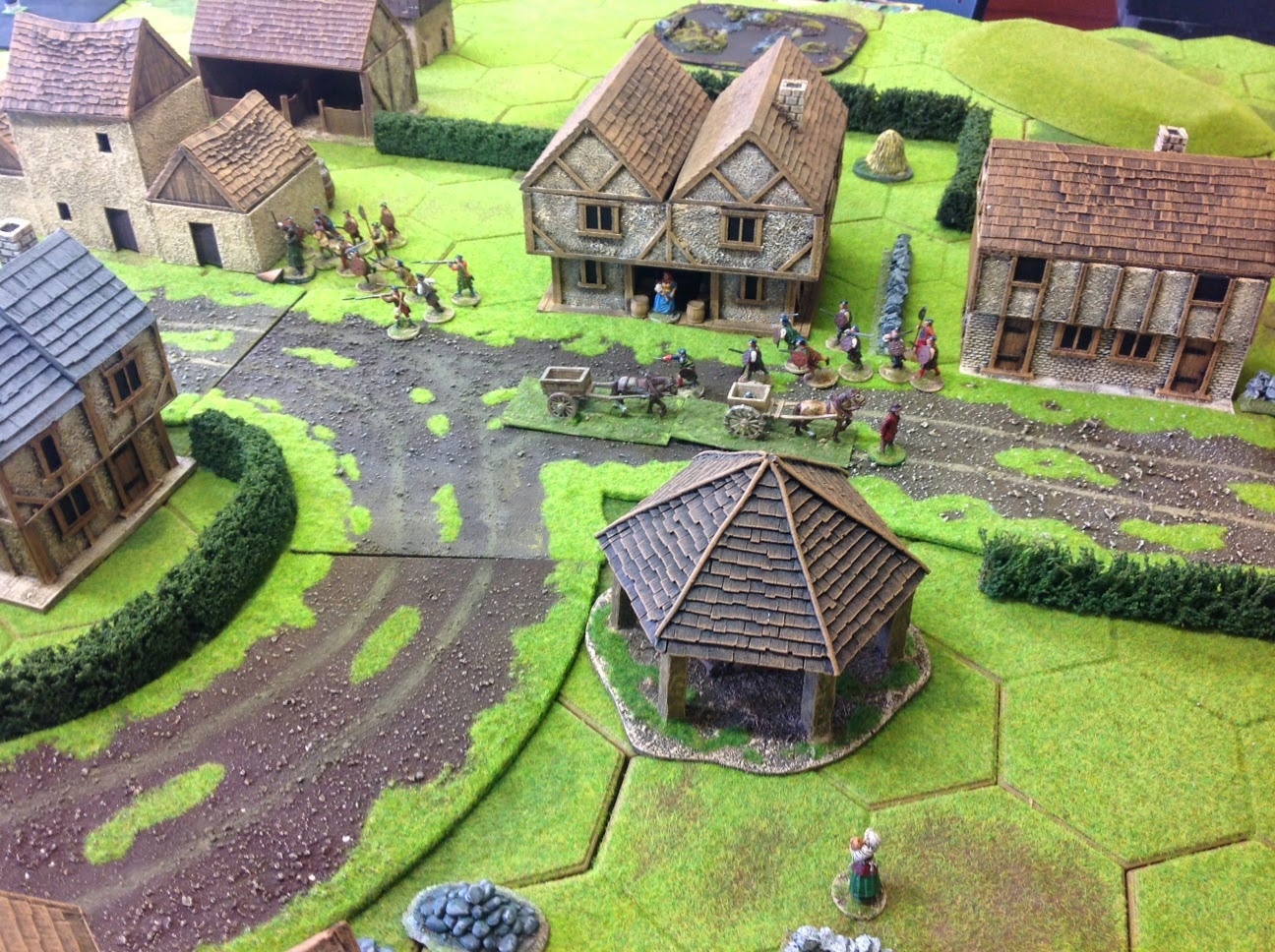 Turn 2 only saw the wagons move, the grenadiers and another missed shot from D'Ilton

The next couple of turns were full of action the Grenadiers and Fiddler moved in sight of the thugs and fired a volley before they could react and despite being behind cover dropped 3 of them, Stark had been cutting through yards from behind the thugs and shot another . They then promptly failed a morale test and fled deciding this wasn't how it was supposed to go, this left 'The Ferret' on his own and exposed.
D'Ilton continued to miss with his shots and decided to withdraw.
The Chieftan and the wagons continued to move North. 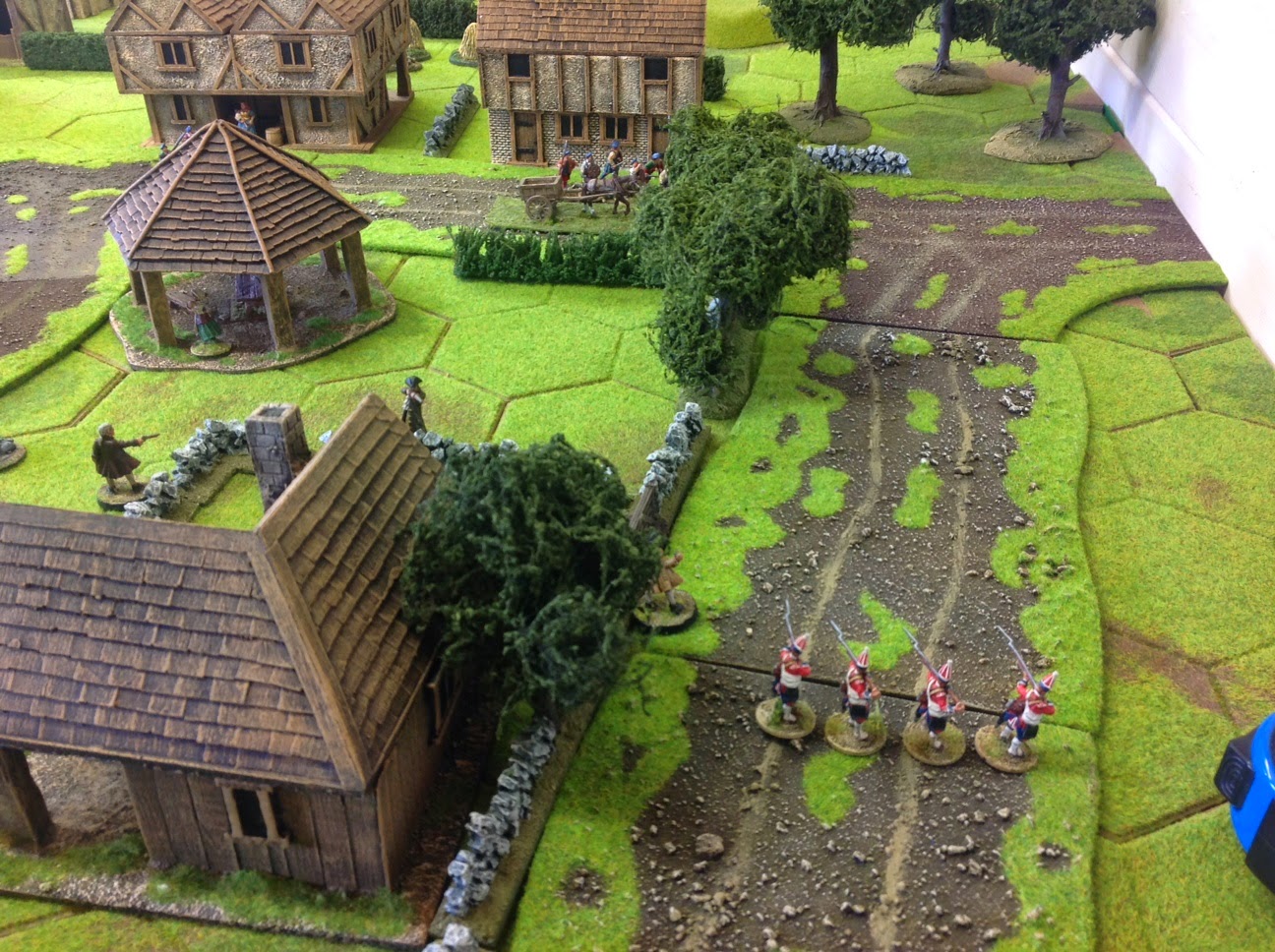 The next couple of bounds saw the unit of highlanders from the rear of the Inn charge the Albion Line on the Southern road before they could reload, despite winning the melee the Albion line held and the melee continued. 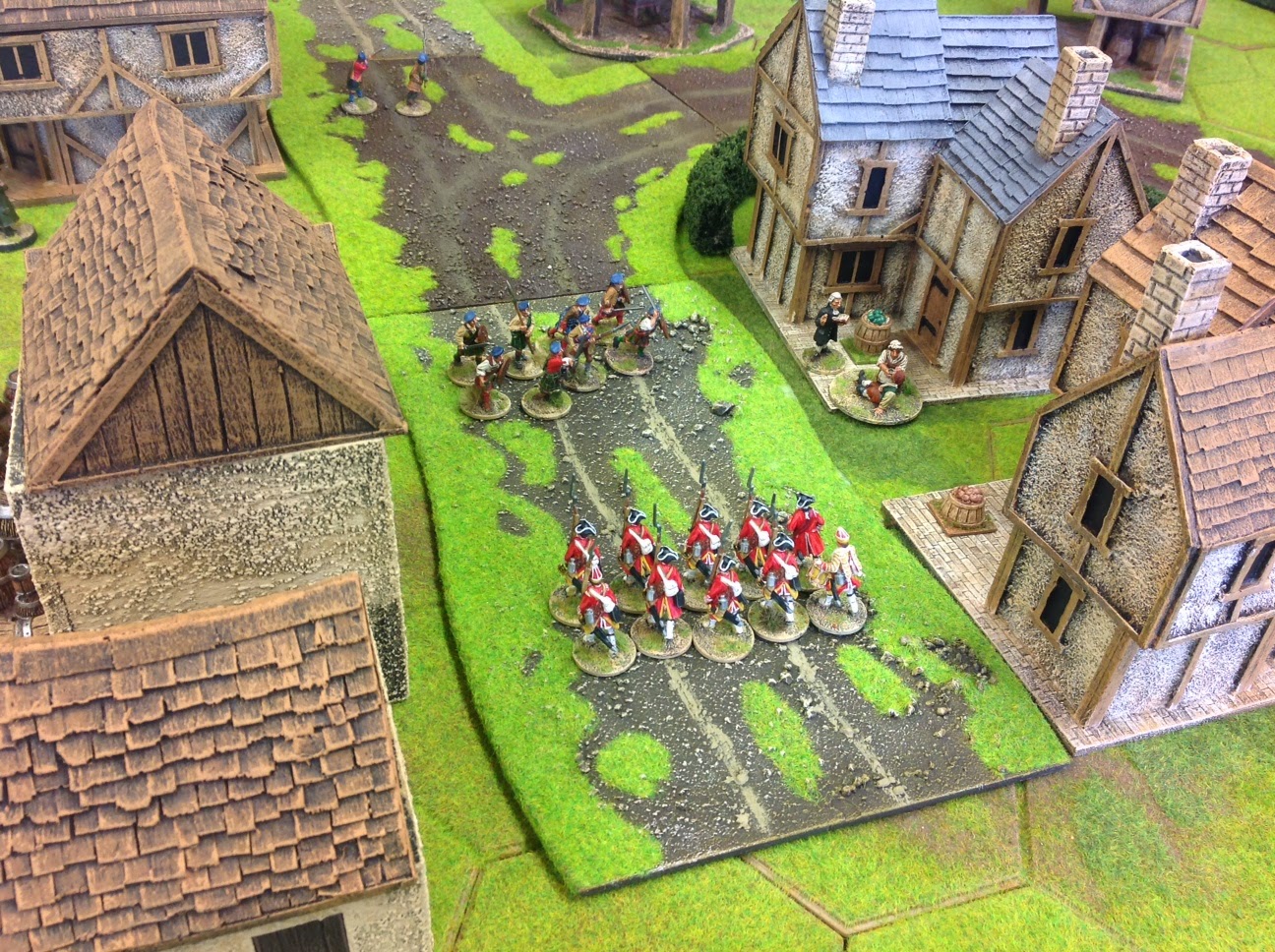 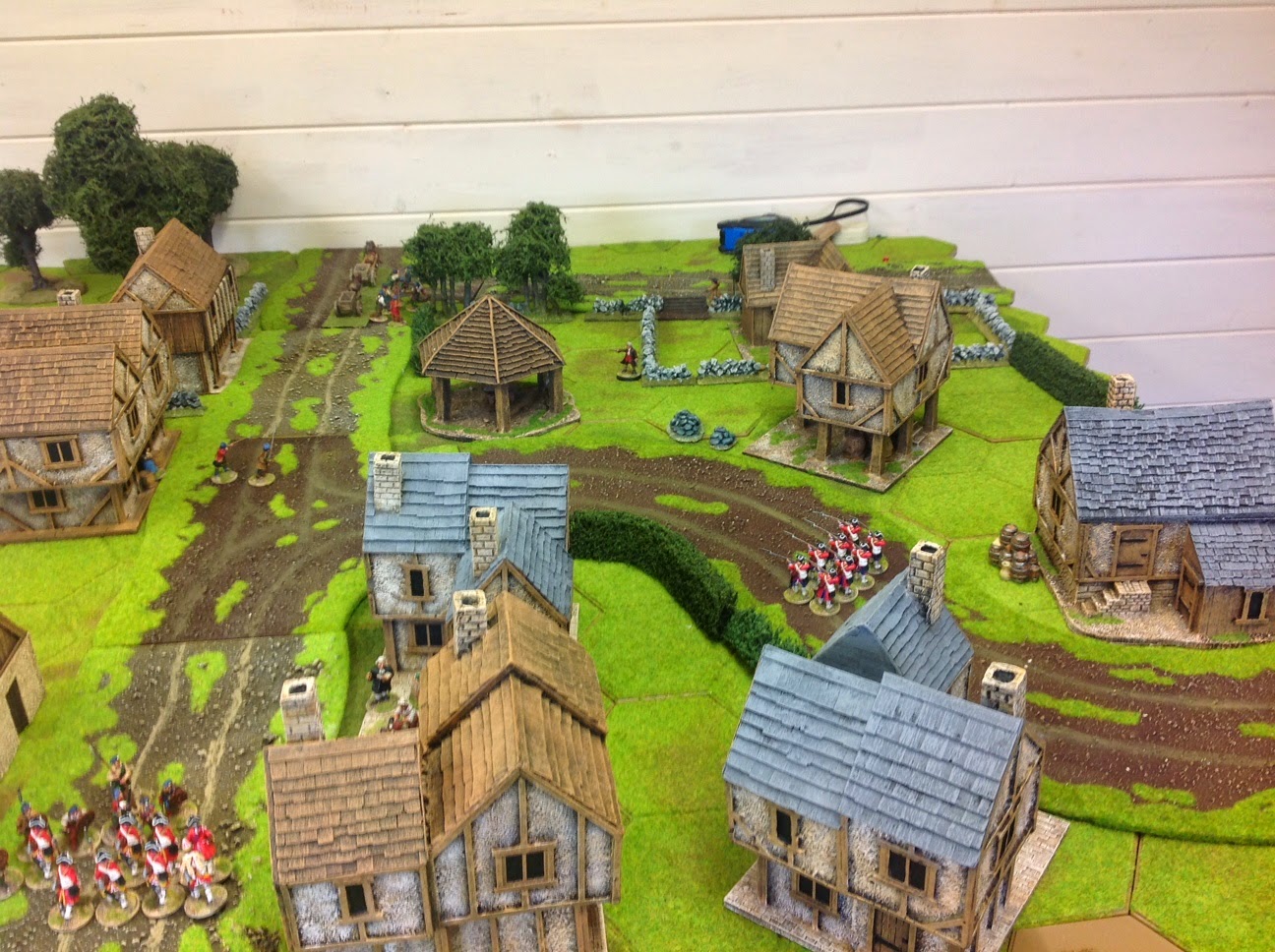 Stark misfired whilst shooting at the fleeing 'Ferrett', Fiddler fired and his shot caused a mere scratch on the Ferret and still the wagon moved eventually exiting on turn 6. 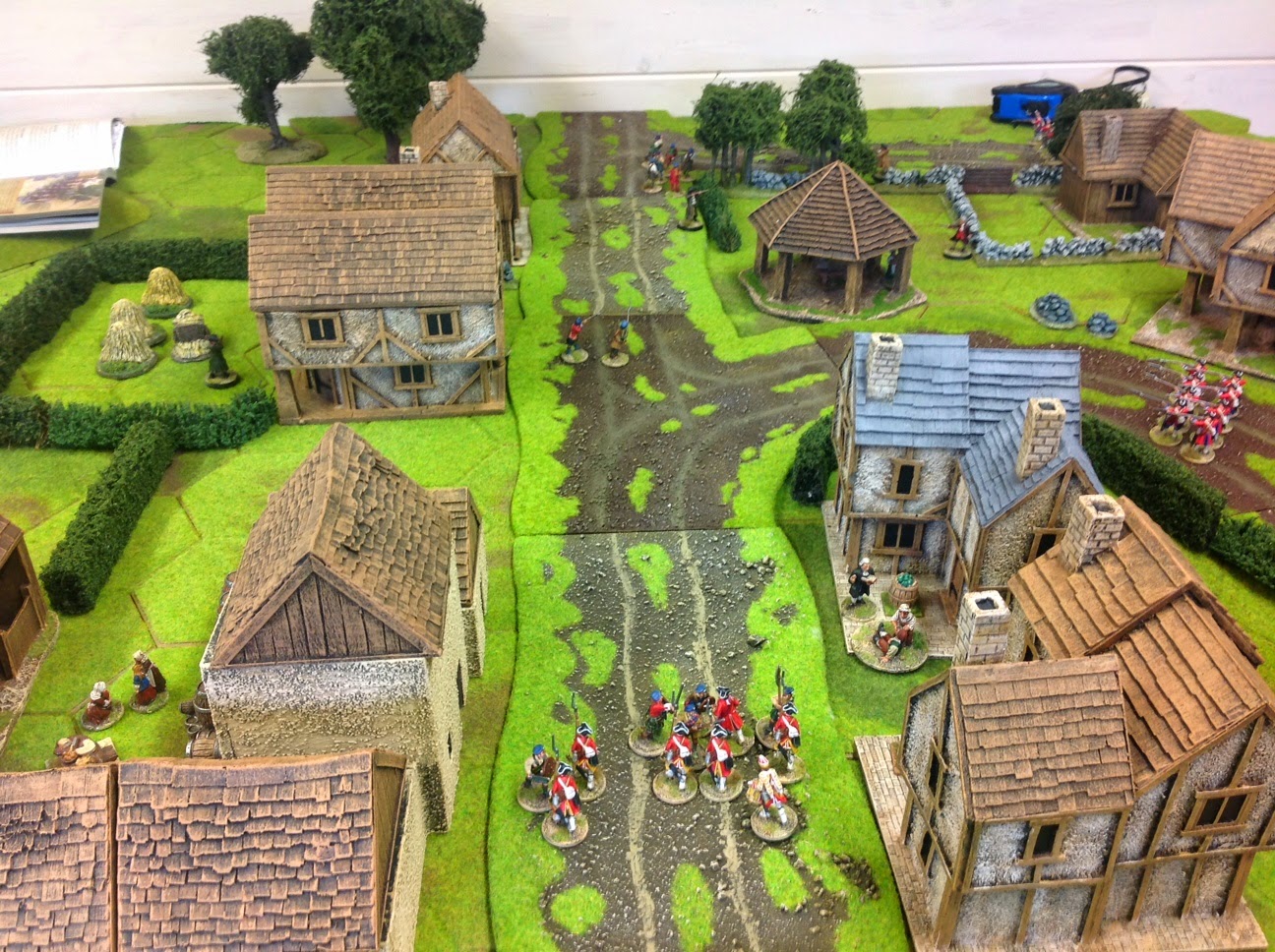 The Albion troops lost 3 men, Scotia lost 7 Highlanders and the unit of thugs.
D'Ilton and the Ferret left the village heading for the marsh land.
Scotia had their weapons and powder, Stark had failed to capture his nemesis.
All in all I enjoyed the rules and look forward to playing more, I like the random activation etc and the potential to have troops unloaded for a couple of bounds can prove to be quite nail biting.
Posted by Graham C at 07:46 3 comments:

Richard has sent me the photos of the new greens that are on their way,
we have the remainder of the British line - Figures in the 'at ready pose' and troops with tricornes turned down into brimmed hats.
In addition the first part of the Irish Piquets, marching and at ease with respective commands.
They can be used for French Infantry. A firing line will be coming next. I've put a couple of pictures below the rest are on the Crann Tara blog. 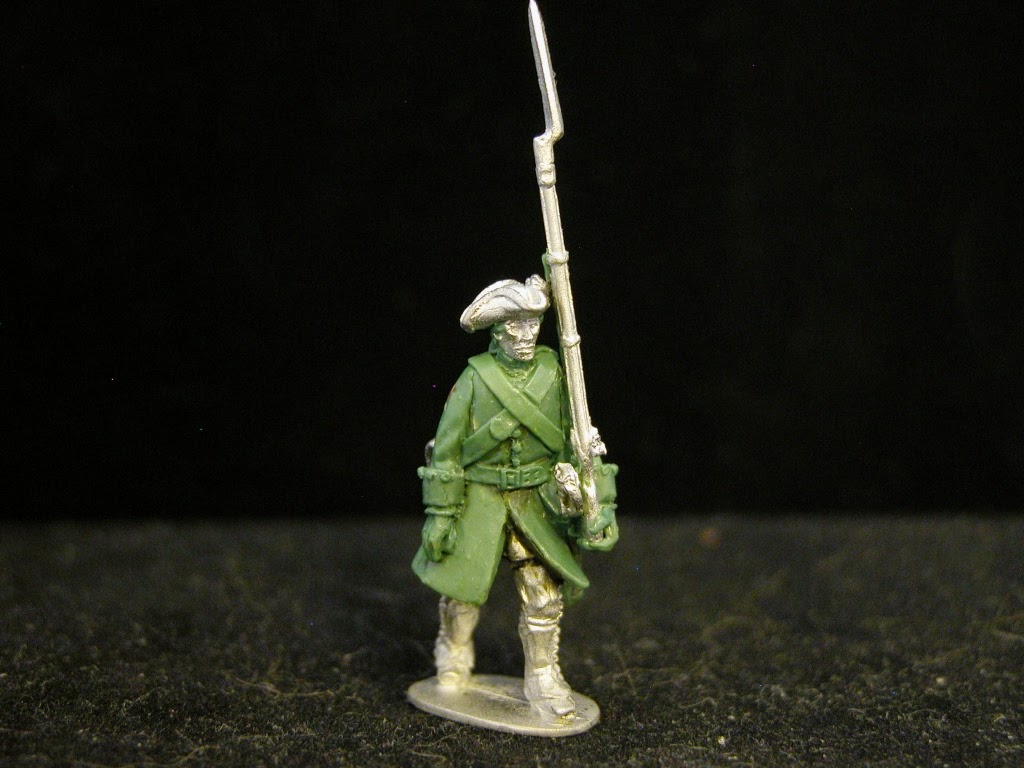 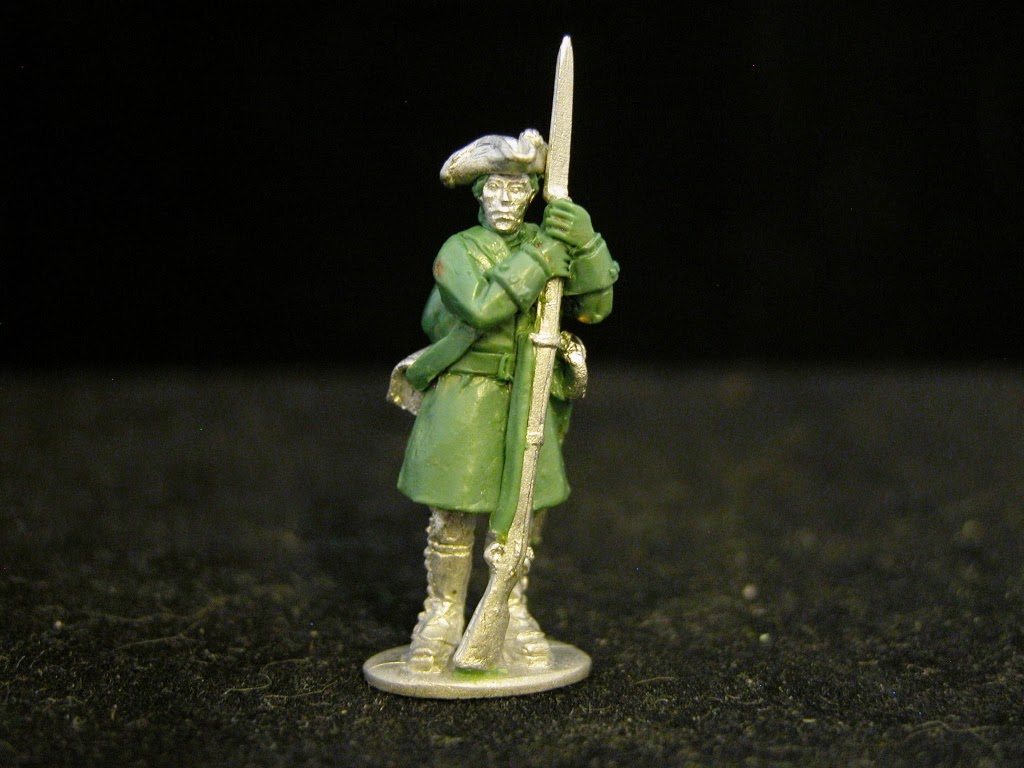