As I've mentioned before from time to time I have the pleasure of travelling up to Charles Grant's to take part in Battles for his future publications.
This weekend saw me go to Perth to take part in the Battle of Vellinghausen.
Rather than go through a full background and excellent account can be found here

The Battle itself lasted over two days, commencing on the evening of Day 1 and for most of Day 2.

The game itself focused on the attack on the Allied left by the Duc de Broglie.

I played the part of the Allies whilst John Dougan commanded the French.

The British commander on the Field of Battle was the Marquis of Granby and Charles asked if I had a suitable model, I didn't so I set about converting one to look something like the picture of him at the Battle of Warburg. 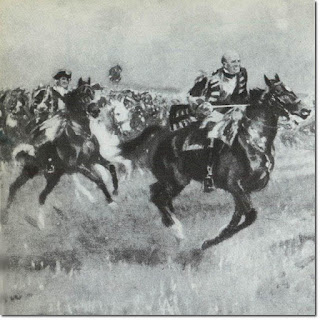 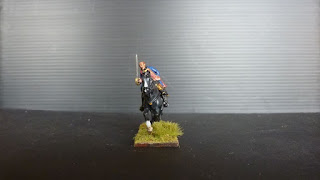 Don't think I did too bad a job.
So upon arrival at Charles I was presented with the table - 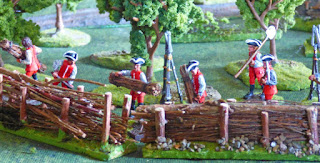 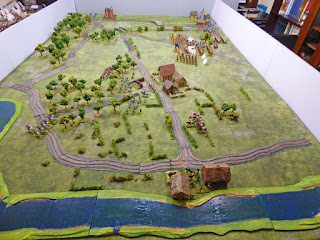 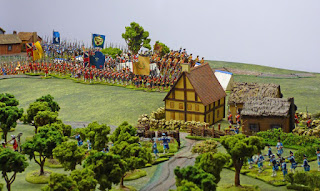 No enemy in sight - British pioneers working on defences to the front of Vellinghausen - the orders from Prince Ferdinand of Brunswick to hold Vellinghausen at all costs.

Now of course I can't go into details of the game as this will be appearing in a future publication. But it was a hard fought and bloody affair.

Here's a picture of part way through day 1 with both the Prince and Granby praying for night to fall. 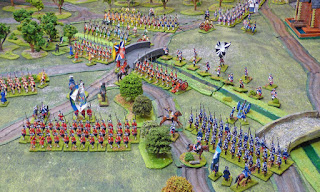 Then we have a picture at the start of day 2 before hostilities recommence and what was to be a very bloody day. 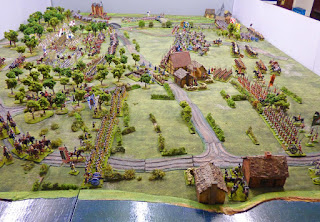 Once again a fantastic weekends gaming, superb hospitality from Charles and his wife Liz and great company with John, Charles and I discussing all things hobby and Crann Tara related late on the Saturday night. Watch out for more new releases - the list is long :)