A victory - and workbench update.

A busy weekend running round doing chores on Saturday but Sunday saw me travel through to Bob's for the annual Hordes of the The Things tourney which forms part of the World wide series of tournaments.

Not a game I play very often in fact it's almost a year since I last played but the event is very much a social event and a nice way to spend the day. This year the theme had to be based on historical armies as I'm slowly painting a Spartacus army for Big Battle DBA so tweaked this slightly to play in the tourney. As usual I forgot the camera but I surprised myself by winning all three games and winning the tournament.
Unfortunately the good guys team lost by 4 points. The only photo I have is Bob presenting me the wonderful trophy ! :)
A cracking day all told. 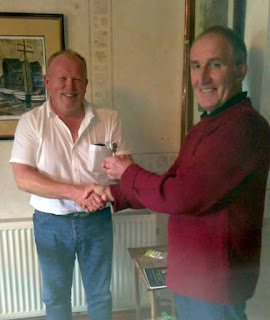 The paint table is still full of busy. The horses for the second squadron of Orleans were completed so I will do their bases and finish off the other two squadrons. Plastic ACW came to the fore as a number of club members thought it would be good if we all painted a brigade or two of palstic figures, so not one to be left out!!
The Jacobites have had a little more done and hopefully I can get them finished this week. 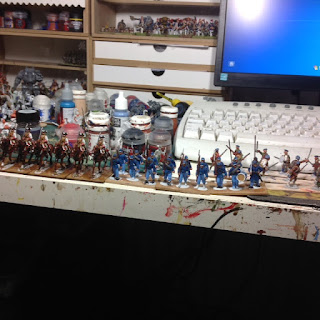 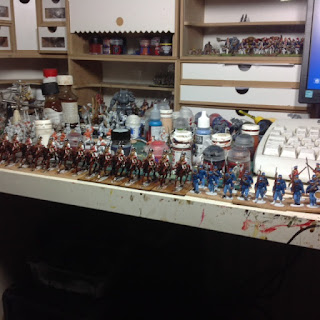 It used to be workbench Thursday - now its whenever I get chance!

Just a couple of pics, to the fore are the Orleans Cavalry - riders painted by Steve Allen I'm painting the horses - 3 squadrons to go. I think for those that get figures painted by others then horses and bases are the two most important things that tie the armies together. Hence I paint my own horses and base the figures, these figures have been glossed and awaiting the matt varnish.

The Highlanders have had a bit more work done but I aim for a push on them next week and then the usual suspects lurking in the background :) 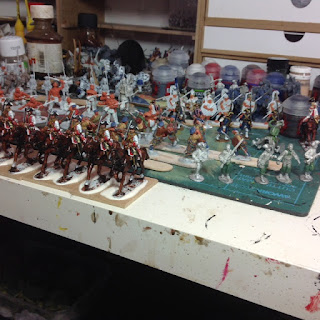 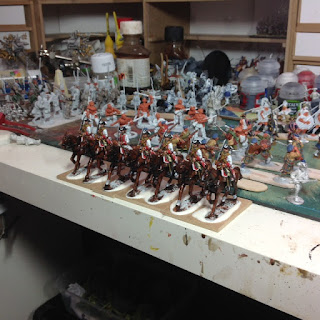 Workbench Update and a bit more!

I haven't posted a workbench update for a while so here goes! The sons Panzer Grenadiers and sci fi pieces are still claiming squatters rights but as no progress has been made for a while they may disappear shortly! Only Dad can keep things on table for an indeterminate period of time.
Now the Battle of Rocoux is done with its trying to get back to some form of agenda - Jacobites to the fore as I'm behind on painting these chaps. Horses for the next cavalry regiment are off camera drying and the 15mm figures are for a Spartacus army - this is for an annual HOTT tournament at a colleagues although these days its more a social bash than a competition - anyway the theme this year was Historical armies so good old Spartacus fits quite nicely. I shall then finish them off for a Big Battle DBA force. 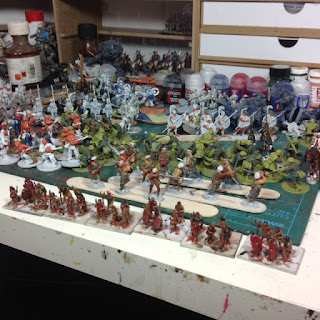 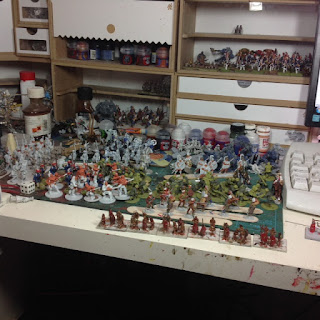 In addition I have just finished an article which may appear in the winter wargames annual - about a few boardgames I think make excellent campaign systems to generate tabletop battles and ideas on conversion to the table top. 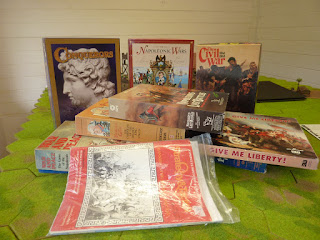 Having just been told my booking for Salute is confirmed its also heads down to plan what I need to get ready for the Crann Tara stand - such is life!