I've just returned from a most excellent weekend at Charles Grants residence. As usual Charles and his wife Liz are most excellent hosts and as well as the game Saturday night was spent putting the wargaming world to right and reviewing where Crann Tara miniatures go next year!

On to the game - on this occasion neither John Dougan or I had any idea what game we were playing, I have to admit I anticipated fighting a couple of small actions, so it was a most pleasant surprise to discover we were to refight Mollwitz. Next to Fontenoy this is a battle I've always wanted to do and as I said to Charles the original game in his fathers book The Wargame provided me with so much inspiration.
In all my previous engagements whenever I have been the Prussians then I think it's fair to say Frederick has been far from Great 😀 Could I redeem myself?
A very hard fought game, on this occasion the Prussian cavalry on the right flank ably supported by two converged Grenadier battalions ( one did break early on) advanced against the superior Austrian horse and managed to prevent them deploying their strength with the result that whilst the Prussian Cuirassiers fell in droves the Dragoons and Hussars managed to hold the enemy and the Grenadiers managed to provide limited fire support causing a steady attrition on the enemy.
The Austrian foot despite being outclassed in their fire drill stood toe to toe against the Prussians for a considerable period of time but it was at a cost Officer casualties were high causing units to break .
An excellent game and one in which I gave Frederick his first victory - and yes he stayed on the battlefield.
Below in no specific order are some pictures of the game. 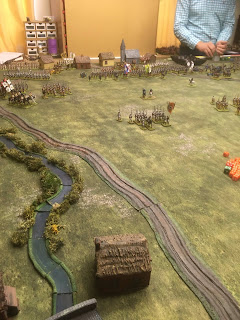 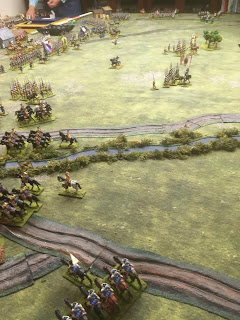 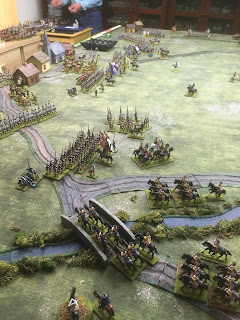 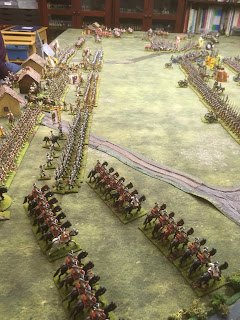 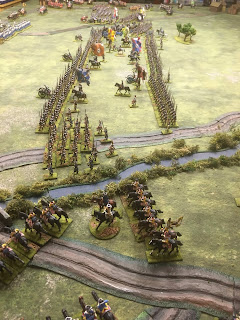 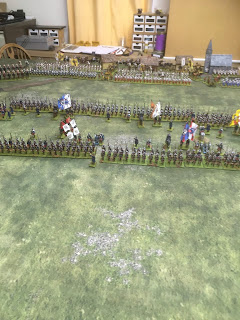 As I have mentioned before I am quite fortunate in having a 4'x4' gaming table in my loft/study which can extend to 5x4 if needed - it's been ideal for my resurrected interest in board games, the occasional 28mm skirmish and 15mm Ancients.
For this winter inbetween painting more 18th century figures I want to try something else.
I've always fancied taking up Napoleonic again but large armies, lots of figures discouraged me except for the much overlooked War of 1812 in Canada.
Small armies, limited cavalry and Indians !
So as a test I bought some Blue Moon 18mm.
The results I'm happy with 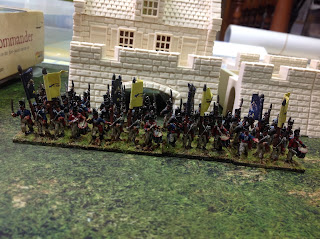 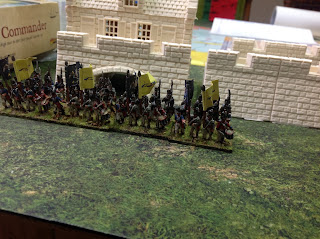 Apologies the photos are a little dark - bad light today.
In addition I'm going back to the old WRG 1685-1845 rules as a tester!

My intention initially is to paint the two forces for Chippewa and then add more figures to the battalions to go from 1:40 to 1:20 if the project works I will also paint some individual pieces for the very small actions.

It will also allow me to use the 1:700 ships I've been printing for the actions on the Lakes - I sill think frigate actions give the best games!
Onwards and upwards then.
Posted by Graham C at 11:18 3 comments:

I learnt from Charles Grant this morning the very sad news that Stuart Asquith passed away last night. 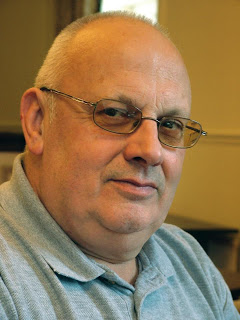 A prolific author and gamer one only has to look on the Caliver books website to see how many books he had written and published. He was also the editor of Practical Wargamer a magazine that provided a great source of information and inspiration. Sadly I only met Stuart a couple of times at Partizan and then albeit but briefly. What was clear that his passion for the hobby remained with him throughout and that it was quite infectious - on both occasions after our conversations I felt re- enthused.
Alongside the likes of Don Featherstone and  Charles Grant, Stuart was one of those individuals that has kept me in the hobby for all these years.
A great loss to the hobby.