Well this month the target is to clear the bench of accumulated stuff, its going to be hard and I doubt it will be totally clear but I am making progress, so far completed 24 phalangites, 18 20mm ECW, a couple of scifi figures and 13 Saga Dark age figs for a commission pics. below. 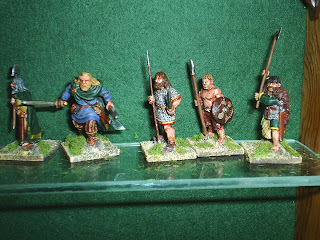 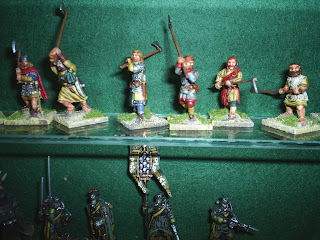 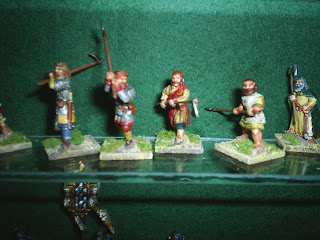 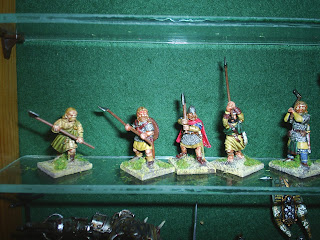 They are a selection of Irish and Norse Gaels together with the Gunnar Humandarson figure from Gripping Beast. The boys are getting ready for our Saga Tourney on the 23rd February.

The 20mm ECW (pics to follow when the bases done) have surprised me, I think they look really nice and I may find myself drifting back into this scale for a couple of periods.
Looking forward to the York show on the 3rd February and see what new temptations are out there.
Posted by Graham C at 10:53 No comments:

Having realised that in my ramble yesterday I had repeated myself in part on my previous post I got my act together and came up with my proposed painting plan.
Jan - clear the decks ( paint as much as possible of what's on the table)
Feb- 15mm Italian WWII desert war
March -10mm Austerlitz project
April - Zulu 'fasounds of 'em'
May - 20mm ECW or Napoleonics.
June - LOTR
July - free month (hols)
Underpinning all of this is painting the 18th Century troops and my never ending Magnesia Project.
Obviously the above will be influenced by painting commissions an the gaming centre but its a plan.
Whilst on Holiday in July I can review progress and return with the year end plan.
Posted by Graham C at 07:46 No comments:

First and foremost I realised over the Christmas period that my Purchase of painted figures from Iain Gale was rash, only by the size of the purchase and after much thinking I have decided to let some of the figures go, mainly because in the cold light of day it starts to take my Imagi-nation down oaths I don't really want to go.
I have promised first shout on these figures to Robbie of the Independent Wargames Group but if he doesn't want them then I will be taking some more pics and seeing if anyone is interested on here.

Both units are to Charles Grants Wargame Organisation, 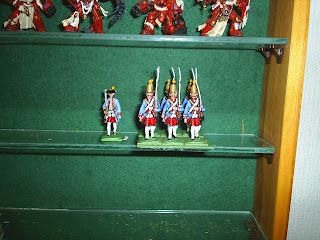 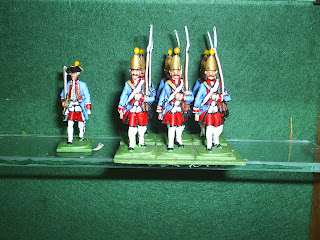 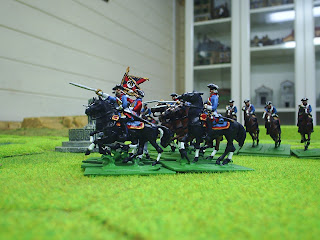 The Grenadiers are Stadden (thanks Der Alte Fritz) figures and the Prussian Dragoons are Holger Erickson expressions of interest appreciated.

Now as to plans for 2013- 2012 painting schedule lasted until around August/September which was good for me and I do need to give some thought as to how I go about things this year. The gaming centre places its own demands in making sure we have figures and terrain ready for the various tournaments and battle days we are hosting (Saga on 23rd Feb and Musket and Tomahawks in March or early April).
In summary I want to get some more of the Imagi-nation completed, hopefully when Richard finishes the new sculpts complete my Jacobite foot, the 15mm WWII Italians just need a final push,my 10mm DBN Austerlitz game is also entering the final stages and just needs a bit more effort.
On top of that is my 28mm Magnesia project and the pressure is on from colleagues to blitz the Zulu War! Finally I would like to get some more of the Middle Earth figures done this year!
In reserve there's the 6mm Franco Prussian  which just lacks cavalry and artillery! and I've also started dabbling in 20mm ECW and Napoleonics. So this week I need to think about whats achievable and then do something completely different!