I had mentioned in an earlier entry that I had acquired some 20mm ( well actually the old 20mm are the real 25mm) ECW figures. I've managed to get the regiment pained Lord Saye's foot- 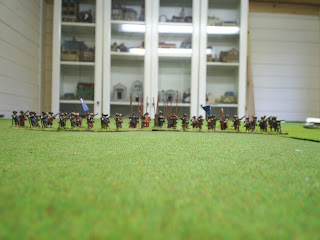 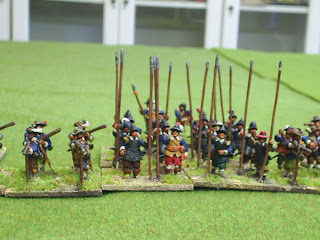 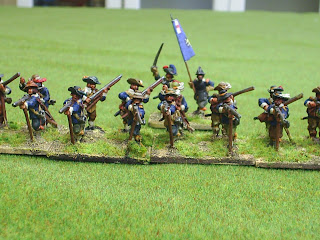 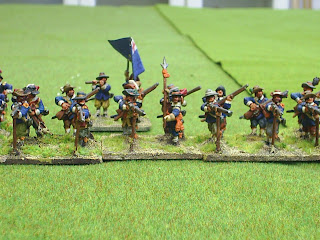 The figures are from Tumbling Dice and come with separate heads which allows you to get quite a bit of variety into the unit. I have to admit I loved painting and basing these and although all are based on the same frontage as my 28mm(40 x40) they look far more in keeping when placed on the table because of their smaller height. 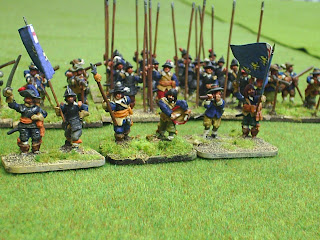 Think its fair to say there will be more of these coming shortly. The last picture is of the command bases, I intend to use the Perfect Captains rules for this period hence the style of basing.

A while back I confessed that I had been a tad over enthusiastic in some purchases of painted figures. I has hoped a colleague of mine would have found room in his collection for the boys but I think he finds himself in the same boat as me. In both cases I'm just looking to recover my cost, in fact in terms of the Staddens its less than I paid!

Therefore before I seek the ebay route I have the following up for sale. 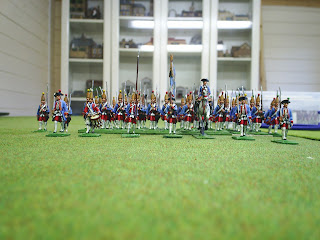 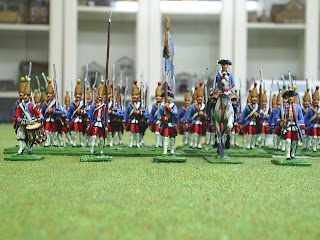 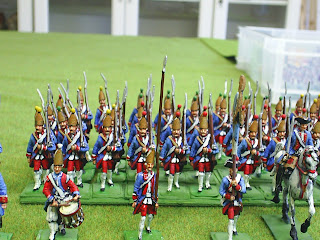 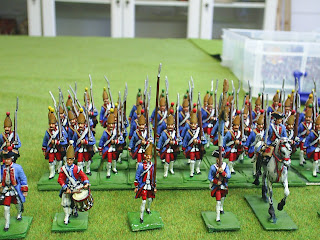 First up are the Stadden Grenadiers, 50 Rank and File and 7 command including the Mounted Officer, neatly painted and easily re based. I'm looking for £160 for this unit excl. postage.
All figures will be carefully wrapped to minimise damage.

Next up are the Holger Erickson Prussian dragoons 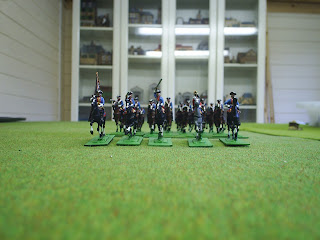 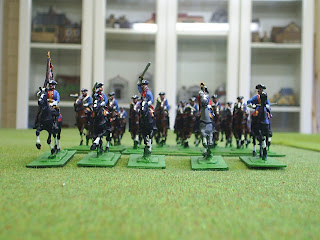 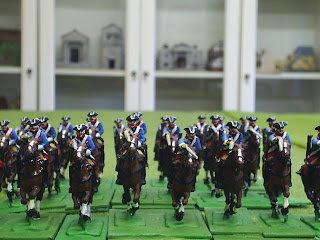 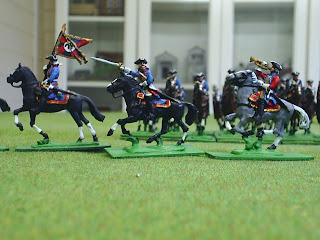 Again 24 Rank and File with 5 command figures, 29 figures in total £140.
Figures will be again individually wrapped to minimise damage.

If you're interested or have a proposition then let me know.

For those that dont follow the Crann Tara blog I posted this entry on the 31st January.
'Yesterday I received a long e.mail from Richard, firstly apologising for his lack of communication (which given his current circumstances is understandable), but more importantly stating he has put all his projects on hold!
He is effectively acting as a full time carer for his mother and says that all sculpting has effectively stopped and that even when he has time he finds he hasn't the energy to do professional sculpting justice.
This is a major blow for me and whilst he hasn't given up he has put the project on hold with no ability to predict when he can start again.
This leaves me with a predicament of what to do;-

I can sit tight and just wait - bearing in mind the project was for me originally.
I can look for some alternative sculptors - I have made some tentative enquiries but I'm not yet convinced they can match Richard's style.
I can look to sell up and possibly start all over again.
None of the decisions are easy to take as I have spent a bit of money on the project etc and have money set aside to continue the range but equally I don't just want the money to be sitting doing nothing.
Any thoughts?'

I have received comments and suggestions all of which are valid, including Frank of Minden Miniatures and as yet I'm still not quite certain of which way to turn.
Posted by Graham C at 14:26 No comments: