Well considering I finished the Grenadier company in June its taken way too long to get the second company finished.
Here's a teaser shot 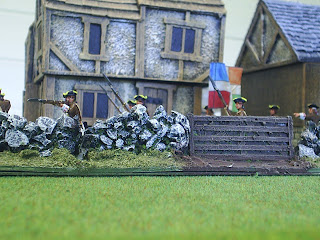 Elements of the Regiment de Nuilly-la-foret (les Lapins) move through the outskirts of a small village near to the Albion border.

I have started and almost completed two artillery crews and a couple of Commanders so hopefully first action will not be far away now.

I have also decided to extend this unit into a Legion by creating a third company, a squadron of Hussars and an Artillery piece although this will be in the future.

Have also received some of Frank's (Minden Miniatures) civilians one of whom I hope to get painted in time for the battle!.

Just a brief post to apologise for not updating. As you will gather the push to get my Figures and web site launched impinged greatly on my time as has the raising of funds. The Saga Scots sold at the Newcastle show and I'm busy painting a Saga Norman army for one of the lads at the club.
However as things have calmed down I'm sitting down tonight to press on with the light infantry, hopefully completed by the weekend.
Then its a couple of artillery pieces and crew and then the first game!.
I have been disappointed by my lack or progress with this project although understandable I have been looking forward to getting armies on the board, so I've taken the decision that the other projects will take a back seat until year end whilst I press on with this and get some action and some tales told.
Posted by Graham C at 19:13 2 comments: