Well as reported in my last entry the weekend saw me travel to Kenilworth to host an Alternative Falkirk!

The scenario was based on one published some time on Kevs wargames cabin blogspot and whilst his was designed for use with Blackpowder I amended it for use with the Honours Of War rules.
There has been a '45 amendment sheet posted on that particular forum and I used this as a core but found the need to tweak it both before and during the weekend.

In essence the scenario was

17th January 1746
After the hapless Cope was defeated at the battle of Prestonpans on the 21st September 1745.
Charles Stuart’s jubilant army had invaded England.

But disparity in the Jacobite command and the thought of facing fresh Govt troops under Cumberland had forced the tired army back into Scotland.

The Jacobites knew time was running out, not enough help had arrived from France.
They were short on everything, although their numbers had swelled from the march into England, powder, muskets and food were now the main concern.

News arrived at Charles Stuarts camp that Cumberland had been re-called to London.
This was to organise the defence of the capital as rumours of a potential French invasion were rife and London was in a panic.

The command of the Govt troops had now fallen to Lieutenant General Henry Hawley.
Hawley advanced with fresh troops to Edinburgh where he met with Generals Cope and Wade.

Hawley, also had a problem, he needed to garrison his supply route to Edinburgh if he was to advance against the Jacobite main army.

He knew the Jacobites were massing at Perth and had now begun the siege of Stirling castle.

He decided to move most of his army to Falkirk in an attempt to relieve the Siege at Stirling.

He sent what was left of Cope’s force to occupy Falkirk and prepare the supplies for his arrival.

General Wade was sent North of Falkirk to clear the area of Jacobite sympathisers.

Hawleys force was spread out, he had no intelligence to say that the Jacobites had moved from their siege of Stirling.

Wade’s Dragoons were camped and had spent the night in Polmont, enroute to Falkirk.
Hawley would arrive later in the day.

This was indeed good news to the Jacobite command.

The weather had been bad, but much needed supplies were available and news that Cumberland was now on his way back up to Scotland with a large force of veterans from Flanders had just been confirmed.

The Jacobites needed to strike now.

If the Govt troops could be destroyed, it would leave Edinburgh open once again to a Jacobite entry to the capital.

This would certainly bring the French into full support of the Stuart cause and a French invasion of England would be a real possibility.
and so the scene was set
I ran the game three times over the two days with three players on the Jacobite side and two on the British and it was fascinating to watch the different approaches to the game, in essence in game 1 the Jacobites won a marginal victory despite having 4 of their 6 commanders as 'dithering' they managed to take Falkirk and prevent Hawley's reinforcements deploying en masse.

The other two games saw the Jacobites run out of steam just as victory was in their grasp. What was 'entertaining'! that in both of these games the Jacobites faltered ( threw a 1 on their command roll) at critical times in the game on some occasions repeatedly! Who said there are no dice gods. In the last of the games the Jacobites had thrown well having only two unreliable commanders and yet Lord Elcho and the Jacobite horse ( dependable commander) threw a 1 two bounds in a row and halted aloowing the British 3 pounders to throw shot down their line and rout Pistligo's horse and weaken the command before they could engage with the British dragoons. 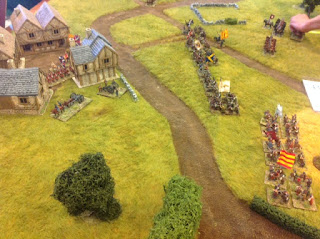 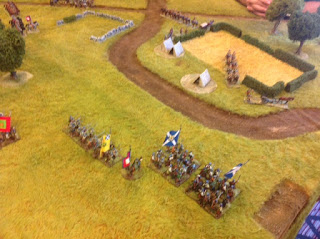 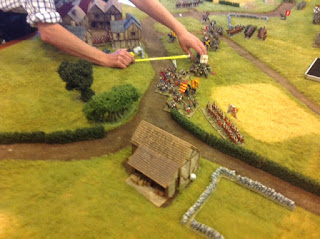 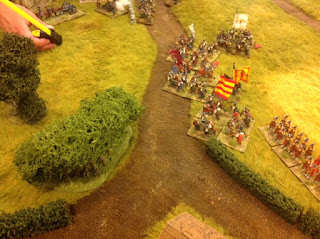 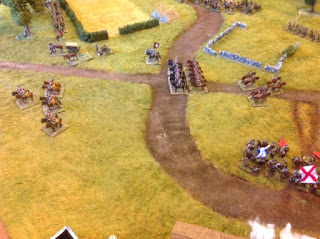 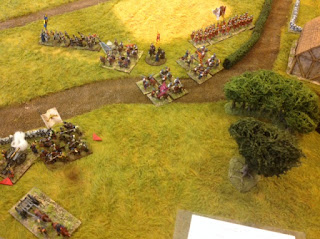 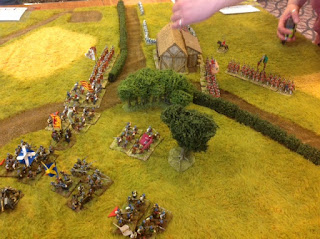 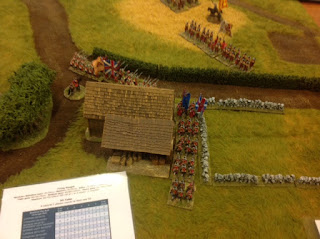 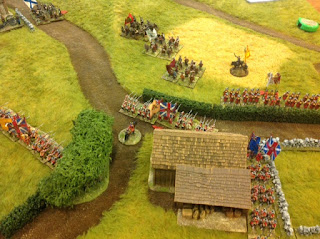 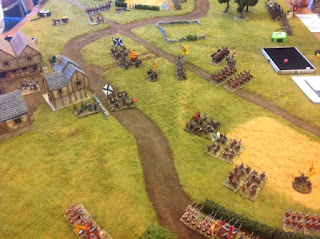 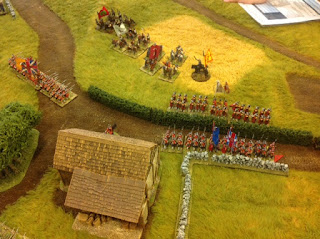 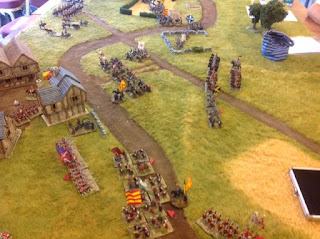 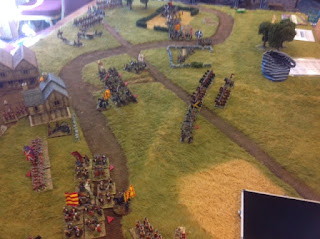 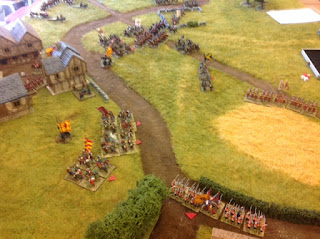 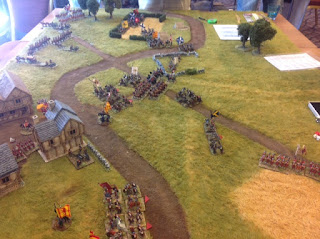 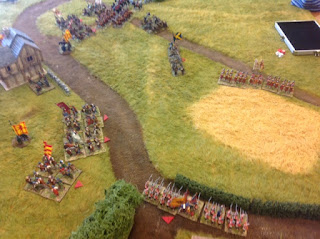 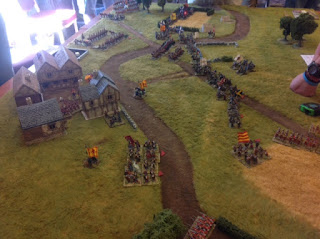 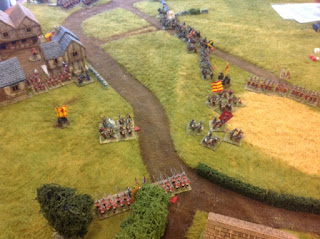 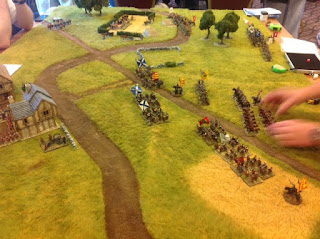 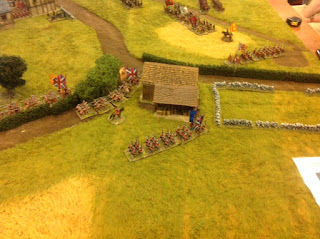 In addition to my game Paul Robinson (http://grimsbywargaming.blogspot.co.uk/2017/06/a-military-gentleman-weekend.html) ran an excellent War of the Spanish Succession battle . 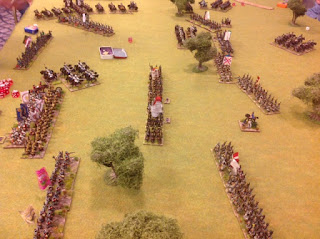 Colin and Robbie (http://www.carryingsonupthedale.com/) presented the Battle of Leuthen 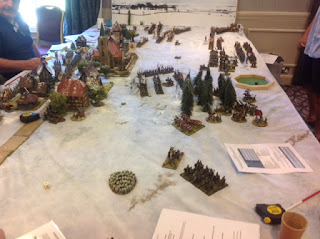 and Martin Gane presented another trip into the Sudan 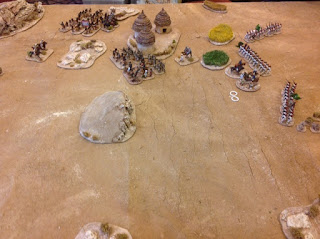 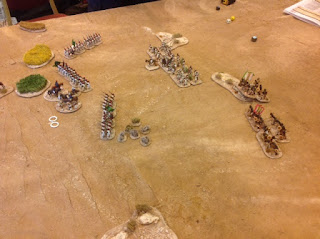 More pictures on the highlighted blogs. As you would expect I didn't get much chance to take photos of the other games during play.

All in all a most excellent weekend, great games, superb company and hospitality. Here's hoping we can reunite next year.

One more Sleep to a Gaming Weekend

Now whilst some of the attendee's are no longer members of the forum this weekend will see 22 of us gather to play 4 possibly 5 games which with one exception are all based firmly in the 18th century.

With a little! help from Guy I'm hosting a Jacobite rebellion game - I had hoped to use some adaptions to Charles Grant's the Wargame I've been working on but they're not quite complete and certainly not game tested so it will be an Honours of War fall back position. So there's been lots of painting and basing getting ready and this morning it's printing and packing.
In the mean time here's some of the pieces I've got done. The British gunners were painted by Mark Allen and Pistligo's horse are unfinished metal masters I've press ganged. 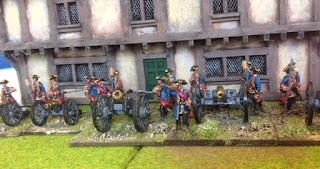 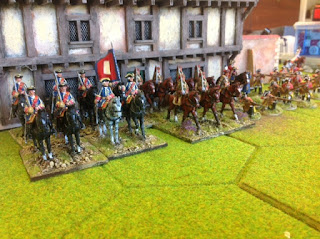 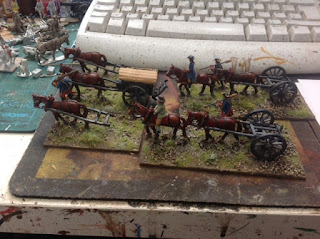 Ally Morrison will be there with his painted version of the Perry's Travel battle for gaming in the bar! and Jim Purky is flying in from America so all in all it promises to be a great weekend.

Hopefully lots of pictures taken for when I get back

With the AMG weekend now only two weeks away its all systems go to get figures etc finished.

The dismounted British dragoons are complete, Baggots Hussars almost, although not required for the weekend I couldn't help finishing the 10mm AWI Highlanders and the start of the British artillery is under away, crews to be assigned over the weekend. 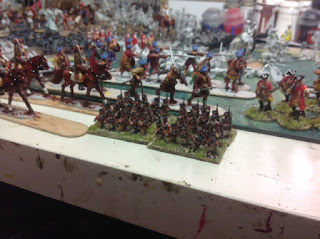 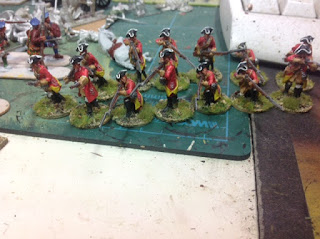 So on target to have everything complete!!!