A slight drift away from the bench.
First I've always loved playing ancients started with WRG 3rd -7th editions then a pause and then Warhammer Ancient Battles.

Still do Big Battle DBA with15's and still based my 28's to WRG standards.
I've been dabbling with To The Strongest which I like and quite a few chaps at the club play Impetus, both use large bases so I thought I would look at basing up a couple of my armies to fit in.

The Germans and Imperial Romans were really based for Warhammer Ancient Battles and so i ended up with all sorts of bases, individual, 4's, 6's and so on.
So first to volunteer are the Germans and I've spent half a day basing 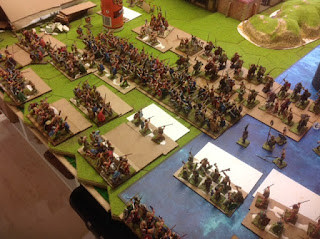 But there's still quite a few on the shelves to go 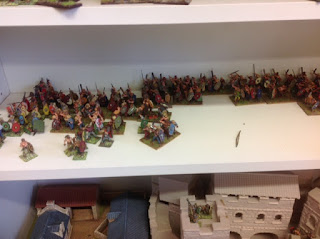 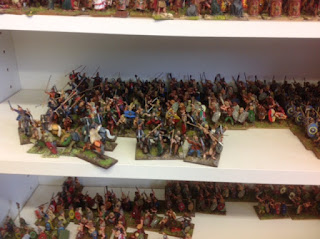 In addition I received a unit of my British Marines painted by Mark Allen as were their standards - excellent stuff so they're stuck on the bases waiting to dry for the scenics to be added. 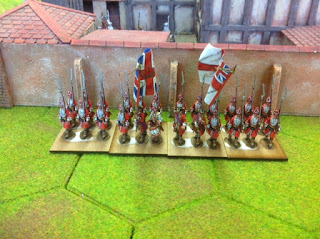 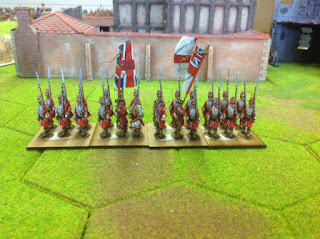 I guess quite a few things happening on the bench at the moment!!!

Finished the 3rd squadron of the Orleans Regiment - riders painted by Steve Allen and horses etc by me. Just one squadron to go.

I've also finished a few more of the 15mm 'Spartacus' army - for some reason I'm finding these a real chew to paint - nothing wrong with the figures - just me.

I've also painted up five of the Naval landing party - converted from Jim Purkey's Fife and Drum range I'm hoping we can to an agreement on these that I can make some more and make them available.
The 'greens' are some  compagnie franche de la marine I'm doing to be cast up for Stuart Insch for a project he's working on for the Sugar Island campaigns - there's more to come for this interesting period.
Not a bad start to the year and of course in the background there's all sorts of other stuff happening 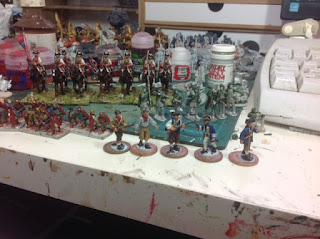 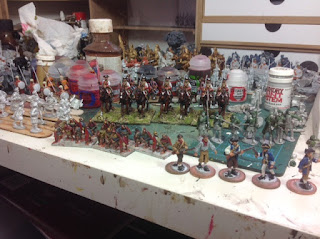 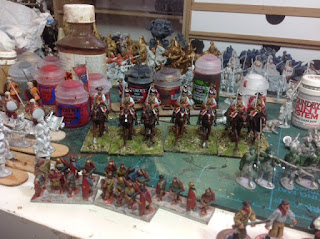 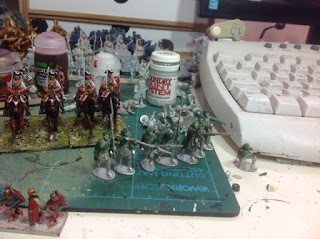 First game of the Year !

My wife was supposed to be working today but unfortunately came down with a chest infection. However she told me to go an do what I had planned so retreating to the cabin with some Gentleman Jack I set to on playing a small Naval game to try out the Blood, Bilge and Iron Balls naval rules.

A solo affair I found them thoroughly enjoyable and detailed enough without being onerous.
Each side gets three cards a sailing card a repair card and a firing card. The two fleets cards are shuffled and the cards drawn one at a time just enough randomness to make it exciting. The only additional optional rule I played was for the British where they can elect to fire in their repair phase, however when they repair in the firing phase instead of allocating one crew factor to conduct a repair they must allocate two.

In addition because this was solo where decisions re change of direction etc was called for I shook a die to see what happened.

The French fleet consisted of the Libre a 44 gun Frigate, Formidable 80 gun Ship of the line and the Desaix a 74 gunner.

The British had the Thames a 32 gun frigate, The Pompei and the Ceaser both 74's their task being to intercept the French squadron before it could gain access to safe waters. 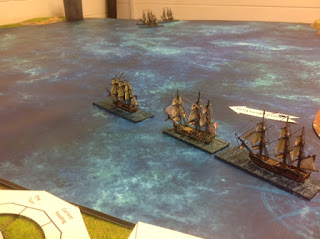 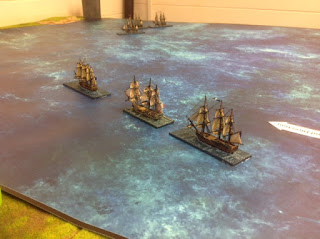 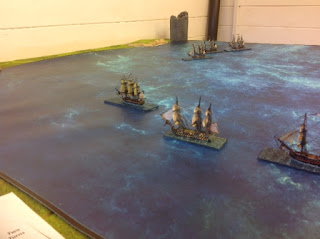 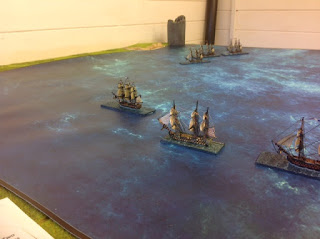 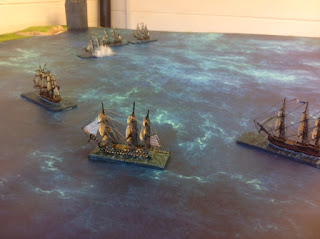 The British Frigate opens fire at extreme range on the Formidable and inflicts hull damage and damage to the starboard guns. The Libre also fire on the Thames and missed. By bound 4 the French were becoming a little ragged the Desaix failed to follow directions from the Formidable the French fired before the British and the Thames found itself under fire from the Libre and the Formidable the combined effect was savage, 3 fires broke out and the foremast of the Thames was damaged. However the Captain of the Thames was undaunted and fired back causing more hull and grew damage to the 80 gun SOL 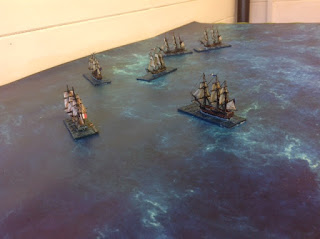 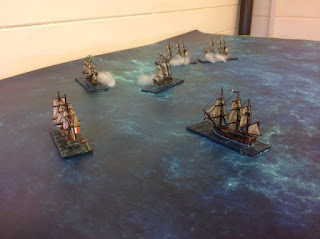 On turn 5 the French got to move first, the Captain of the Desaix still failed to follow instructions!
The Libre sought to head off the British 74's and bow rake them!
When the British fire card came up they chose to change it to repair hoping they would be able to move before firing. The crew of the Thames managed to put one fire out.
The French fired first with only the Libre having anything an arc and she fired on the Pompei taking out a starboard section of guns.
The British firing saw the Thames fire on the libre causing a lot of crew casualties and damagung its stearing gear the Pompei and Ceaser both fired on the Desaix and although it was long range the destroyed 2 starboard gun sections and caused damage to her masts. 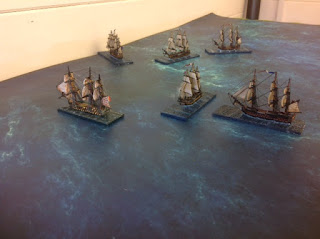 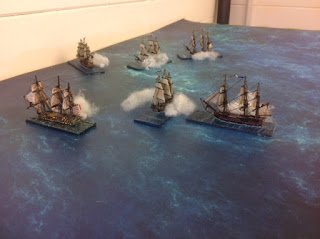 The next bound things got serious with the Thames getting in front of the Desaix for a bow rake this small frigate took out another starboard gun section, a complement of Marines started another fire and she also fired at the Libre the Desaix again was shot at from the Pompei and ceaser this saw the foremast destroyed, the main mast damaged and yet another fire things were looking grim over 50% of the Desaix's crew were casualties. 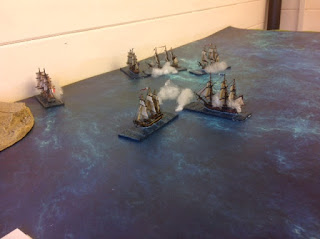 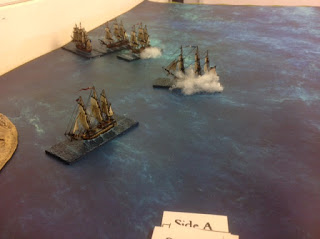 Over the next couple of bounds the action intensified the Thames was able to fire another bow rake into the Desaix due to the card draw and the Ceaser rammed the Libre to board. The Desaix managed to fire a broadside into the Thames causing severe hull damage but between the Thames and the Ceaser the Desaix lost its starboard gun, its mainmast and more crew forcing the Captain to abandon ship as the fires raged.
The crew of the Libre fought valiantly against the Ceaser but weight of numbers told and the frigate was captured. The Formidable escaped but the British had won a great victory.

Man of the match - HMS Thames (must be captained by Aubrey).

Verdict. The rules were very good, I liked them a lot. Pretty quick to play, enough detail without being onerous and all in all just what Ive been looking for.