I'm sure many of you will have already heard and found the Artscow site
http://www.artscow.com/
but you can create and design all manner of things on there and then for not unreasonable prices have them printed and delivered.
The Big Red Bat (Simon Miller) sent me a copy of his 'To The Strongest' Ancient rules, Simon uses packs of playing cards instead of dice for orders, combat etc.
Anyway I thought I'd treat myself so I contacted Secundus on the Iron Mitten blog
http://iron-mitten.blogspot.co.uk/
he is a very talented cartoonist and has done some great sketches of all periods so I asked if I could use some of his sketches to illustrate the cards for non. commercial purposes and he said no problem.
Below is the result, 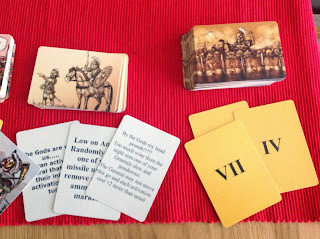 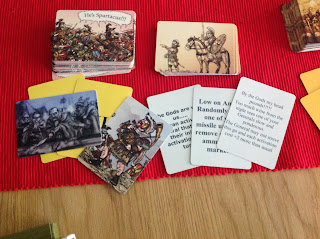 The top picture shows the random events pack, on the left, which Simon hasn't included in his rules but which I'm going to try out. On the right is one of the player packs 80 cards numbered 1 - 10 (8 of each) and which I've used Roman numerals. Also included are two random event cards shown in the second pic( the poor Roman Musician) and also a reshuffle pack card .
It also shows the backs of the second player pack
I think great value for money and they are the only ones!!!!!!!
So once again thanks to Secundus for allowing me to use his pics. 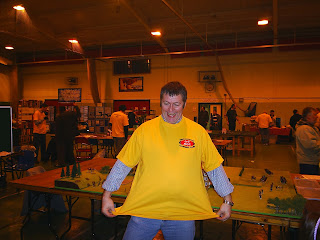 It is a very sad day for me, Lee Maxwell my close friend for many year died last night following his year long battle with Motor Neurone disease.
Lee was part of the informal group called the Redcar Rebels or as Duncan McFarlane used to call us the Teesside Triumvirate and we put on demo games at most of the Northern shows for many,many years.
Lee was a potash miner and rugby player so it goes without saying that our weekends away at the shows were normally accompanied by a few pints of which he could consume an awful lot more than me!!
In the early days of the League of Augsburg group we were invited to a few of Phil and Barry's mega games and I know Lee particularly enjoyed these at the early 18th century was his favorite period.
His reputation as a cavalry commander(***) became established during this time, give Lee the cavalry and it was guaranteed either to fail the majority of its command rolls or having once found its way into melee failed to score any significant hits.!!! His luck with cavalry never changed until our final game when his cavalry regiment rode all over my troops!!
His developed a passion was for 42mm gaming and in later years we did a number of demo games with his Franco-Prussian war collection. We were terrible for encouraging each other to expand the lead mountain, always discussing new periods/scales options, rules whatever and when I retired two years ago we had great plans.
Fiasco last year was when he told me he had been diagnosed with Motor Neurone disease and unfortunately Lee had its most aggressive form, his speech deteriorated quickly and over the year he suffered muscle wastage. It was hard to see him deteriorate so quickly but always in his eyes was that sparkle and mischief. He was determined to go to the Partizan show in September and Dave Imrie had suggested we help him in his game.
I knew that this would be his last show and Lee wanted to go to see old friends and say his farewells, to those people who spoke with him and and had a laugh with us I thank you all.
My deepest sympathies and thoughts go to his wife Amanda and his children Tom and Anna.
Will miss you mate and whatever you do dont take charge of the cavalry!