From Bench to table

The first two units completed off the bench - just short of 100 figures.
Barrells Regiment which took the heaviest casualties at Culloden now based and ready for action, the Standards are by Flags of War and I stock them in the shop.

The Suren Grenadiers as I said before were purchased more from the nostalgic point of view however I have contemplated keeping some odd units back for use in the Albion campaigns - I saw the standard on the warflag site its a Medieval one 'The Guild' and hence a kernel of an idea -troops supplied by the Guild to ensure the money they have loaned to various states is being spent wisely and to good effect in the struggles, so the Grenadiers are the first of 'The Guild' to march. 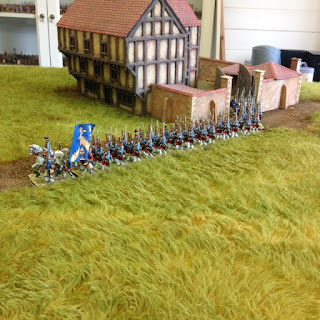 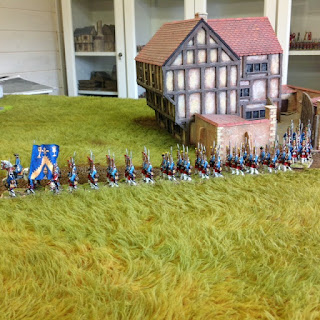 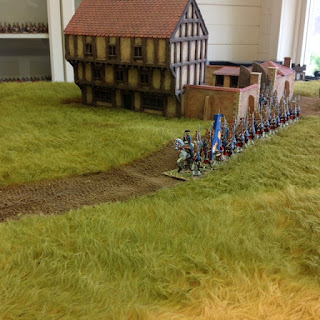 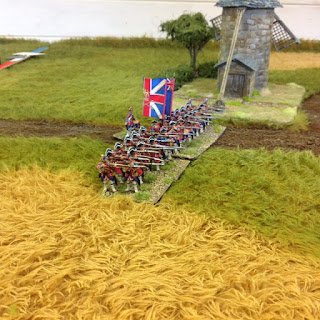 Assault on the work bench!!!! 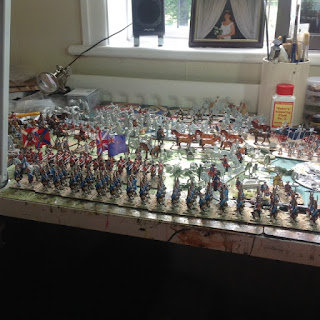 Over the last three weeks my son and i decided to sell all our GW fantasy figures so much of my spare time has been taken up taking photo's, listing etc. part of me was quite sad as there's lots of good memories tied up in them of the games we had.
However as my son pointed out with his plans to move to America that's all they would be, the armies would just sit on the shelf and all we would have are the memories!!!
So better to sell, spread the joy so to speak and we keep our memories - looks like he's got quite sound reasoning.
Any way this clear out also leads to the decision to have an assault on the workbench - tidy and organised aren't two words that feature on my bench. However I have decided this month to go full on, base figures that have been sat there for months and try and get as many of the figures painted and off the bench as possible.

Barrel's regiment - a recent addition is done and bases waiting the paint. The old 30mm Suren Grenadiers I bought some time ago, the paint job was good in parts but flash had been left on the legs and some parts of the figures not painted fully.

I didn't fancy stripping them right back as I'd bought them more from the wargaming history perspective than the gaming side and whilst deciding what to do they've sat at the back of the table for best part of a year!! Any way the decision was to base them and tidy the paintwork up as best as possible - yes I've left the flash on and to be fair whilst it goes against the grain unless you examine the figures closely you can't see it on the figures where its present.

So lets see what the next week brings as gaps start to appear on the bench!
Posted by Graham C at 16:53 4 comments: