Something to make me feel better

Got laid low by some damn chest infection last Tuesday which is refusing to budge and has prevented me going to the club and has slowed down the painting! However with one last effort I hope to finish my first company of the new French?Comyn regiment before month end!.
I have also been looking intently at the soon to be released range of figures by Claymore Castings, (notably David Imrie and Andrew Taylor), the figures have been sculpted by Paul Hicks and the first releases are for the Scots at the Battle of Otterburn in 1388.
I have tried hard to resist but I've know David for a while and following a telephone conversation I gave in  and placed a pre-order. However David very kindly sent me a couple of samples which arrived today.

The pictures I took of the unpainted castings are rubbish but the below is pinched off David's 'Saxon Dog' ( http://saxondog.blogspot.com/search/label/Claymore%20Castings) 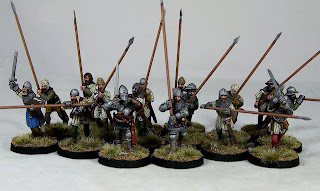 I should have realised I wouldnt last to the year end without deviating.
Anyway my samples are ready for priming and hopefully will start the paint job tomorrow.!
Posted by Graham C at 19:29 No comments:

Over on the Independent Wargames blog he's been musing about Steve Eardley's column in Miniature Wargames regarding Elitism, Class and respect in wargames and it got me thinking about my gaming standards!
I'm fortunate that I'm a member of two gaming clubs and also have a number of friends with whom I've gamed with for many years. I enjoy the painting, the research and the preparation for the game to the point on occassions where the game quite often is secondary, I never use unpainted figures in the army and I dont enjoy playing people whos only interest is to win at all costs, does that make me elitist?
I hope not, one of the wonderful things about the hobby is the diverse characters it brings and to be fair in terms of bringing 'young ones' to the table Ive played against their unpainted hordes. If i chose not to play against some individuals it is because their type of game and motivation to play is totally different from mine.
As to class in wargames, I suppose somewhere out there are a number of individuals who look upon their collections with glee and only game with the chosen few. I may have met one or two of these in my time but you certainly cant relate to 'class' unless its some form of internal Elitism within the hobby.

Any way I'm happy with my lot and thats enough of deep thinking. What have I been doing, well Ive started on the Mounted Officer (Rupert Gibb) for the Royal Albions. 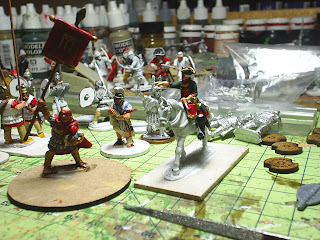 Next to him is a model of Antigonus 'one eye' by Gripping Beast I'm painting for my Successors.
As its Zulu month I've also been painting a few of the Warlord Plastics 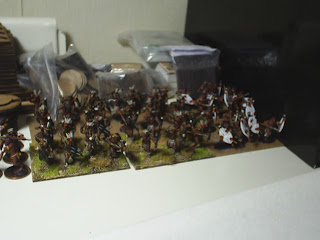 They come out quite nice, some plastic SYW would be good!
I've also started on my next Duchy of Comyn regiment and hope to have the first company finished by the weekend. 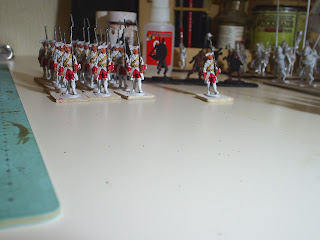 I've also been giving some thought to the naval side for this campaign, I do have some of the Langton  1/1200th scale ships painted but not many and they do take a long time to make a decent job. So for the sake of the game I'm looking at coming down to 1/2400th and will try painting a few ships over the coming weeks.
I've put a better pic of Antigonus below just because I like the figure 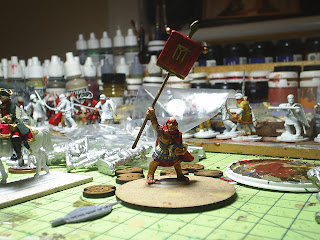 I've found another load of bits to go on ebay next week, GW Inquisitor and other lost! and now found projects in order to fund the periods I like.

Hopefully arranging another Marlburian game next week in the cabin, and until then pip pip.
Posted by Graham C at 21:55 No comments:

The first couple of weeks in February is always a bit hectic, wifes birthday, sons birthday, valentines day ( yes still a bit of a romantic), anniversary of my Dad dying and finally the first show of the year at York!

Despite all that I've managed to get the Royal Albion Lights finished (all except amounted Colonel). 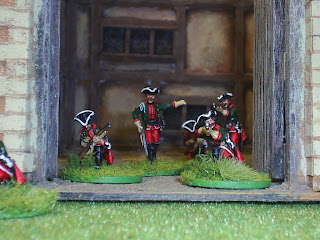 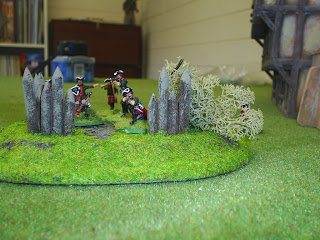 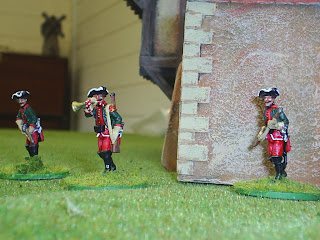 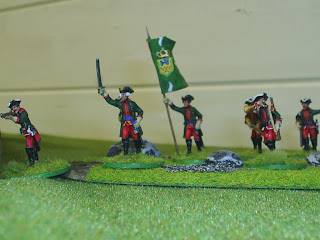 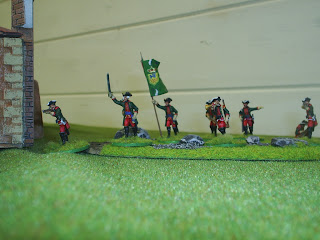 In all I dont think they've come out to bad, the standard is based on one from Denmark, I'm still going to tweak it but for now I just wanted them to have their standard.. I can now start on painting the second Regiment from Comyn as I gradually move towards getting enough figures for the first engagement.

As to the York show, luckily a colleague was going in his 4x4 as I doubt my motor would have made the poor road conditions. A nice show made better by the chats and conversations with people and traders I haven't seen for a while, in fact between 9.30am and 2.00pm when I left I only got round once!

I'm afraid I forgot my camera but one game I did enjoy was the Ilkley lads rendition of the battle of Sawmill Village using the Prince August homecast figures, very nice.

My shopping list was small, some oxen, a few phalangites and some saxon infantry. I almost got away without an impulse buy but I saw the below 15mm Peter Pig AK47 figures, almost 200 figures for £50.00 and that was it! Still came home with some money though, all in all a good start to the year.
Now back to the painting table. 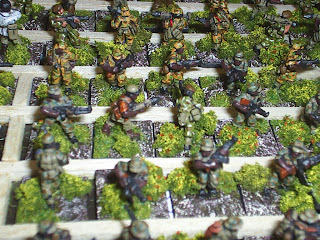 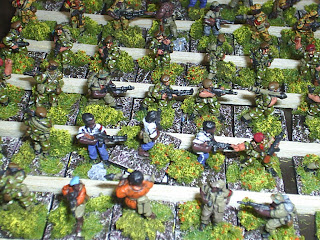 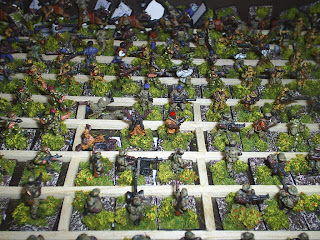