Happy New Year, a short review and a look to the future

Well first and foremost I wish you all a Happy New Year and lets look forward to 2014.

Before doing so however like many I wish to take a short look back, I achieved 748 paint points which is almost 200 down on the previous year and is somewhat disappointing for me. However part of that was due to my close friend Lee's illness and subsequent death and part was just poor planning on my part!!! The painting plan, unlike the year before, effectively didn't last beyond first contact.

However the upside is that I reckon I managed to get around 35 games played this year which is very good and one I hope to improve on in the coming year.

Looking to 2014 then my butterfly approach to painting has to cease and I will be concentrating on four main themes -
first and foremost my 18th century figures. More Jacobites, more regiments for Scotia Albion and the Government troops when Richard has them finished.

28mm Ancients - Magnesia project this has and is a mammoth solo project but now with the tenth and final phalanx almost finished painting the remaining Seleucids and the Roman army doesn't seem so daunting now!!!!

15mm WWII - a bit of slow burner but my Arnhem project is chugging along quite nicely and its something I can do when pressed for time.

I'm sure things will get added along the way but I will try and remain focussed on the above which is more than enough.

Hope to see quite a few of you over the next year at various shows etc.
All the best
Posted by Graham C at 12:41 No comments:

Half of Magnesia (well not quite)

In the background whilst I've been flitting from project to project I have been plodding away with a solo project I started a couple! of years ago.
I wanted to do the Battle Of Magnesia in 28mm. Over time nearly all the figures for both armies have been bought ( I still need 3 Indian Elephants!) and I have been gradually painting my way through the Seleucid army. The original intention was to do big big battle DBA and army compostion has been based on that.

However Simon (aka Big Red Bat) sent me a copy of his 'To The Strongest Rules' and I quite fancy trying the battle out with the rules.

Now bearing in mind I haven't started on the Romans yet I have been making my way from the right flank of the Seleucid army to its left. I am on Phalanx number 9, one more to go and that puts us past the centre.

So today I decided to get the figures out and try the deployment as close as possible to Simons grid based rules, the results are seen below;-

Below is a general view looking at the Seleucid line from and elevated position. 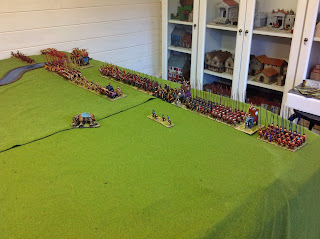 Closer image of the Seleucid right van, horse archers and bows with slingers out front. 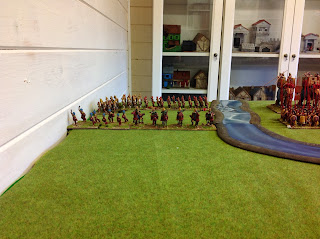 Moving from left to right we now have the Argyraspides, Indian elephants to their rear! light Infantry to their flank and just visible is the start of the Cataphract line. 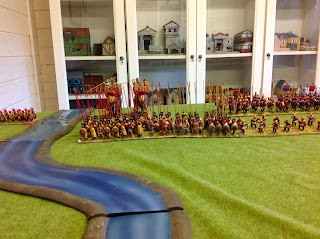 Continuing along you can see the light infantry and scythed chariots behind which is the mass of cataphracts with Antiochus himself. ( The banners need emblems on them) 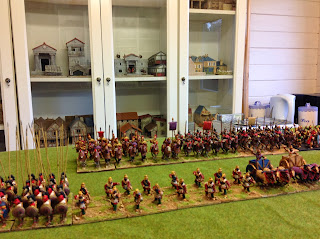 Continuing along there is a unit of Celt Iberians masquerading as Galations and then the start of the Seleucid centre which comprises of 8 Phalanxes interspersed with more elephants and light infantry to the front. I just deployed to fill the 6' frontage.

There's some more close ups below. 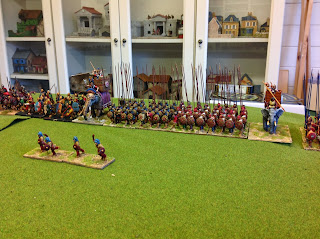 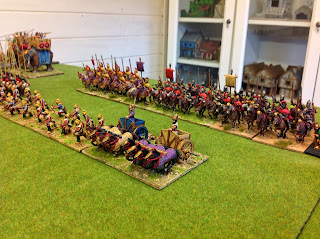 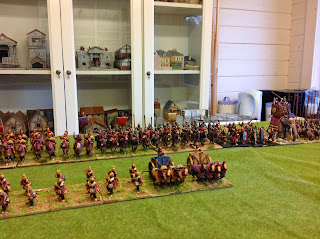 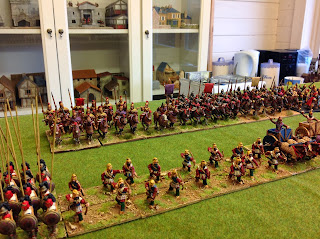 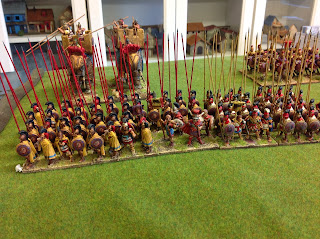 What I have found is that where I was going to be looking at a table around 16' long using BBDBA I reckon I can lose about 3' of the table because of Simons grid idea.

Now this part of the army is deployed I'm going to use my Imperial Romans as proxies and have a bit of a bash, a to see how the rules go and b) just for the fun of it!