Just in case anyone thought I had to much spare time on my hands since I've retired then here is just a short note for anyone living in the North East of England. From the 1st December a new gaming centre will be in open near Middlesbrough.

I have teamed up with Brian Waugh of Waugh Games and convinced him of the value of such a place.
(http://www.waughgames.co.uk/)

We should be able to have around 12 tables (6x4) on the ground floor,
There is a shop on site which stocks a wide range of products and we can order anything that North Star etc. advertises.
There's a healthy discount on most items especially for callers or people who order for collection.
The shop is open 6 days a week and whilst the gaming centre will be advertised as being open 3 days a week any groups wanting to come through and game just get in touch and we will arrange for the place to be open.

Light refreshments will available on site and whilst a small charge is made for the hire of the table this will be redeemable in the shop.

That's enough of the plug - all I want is get more gaming in and what a better way than having my own place!!
Had to do something with all that spare time in retirement!!!!

If anybody wants more info then pm me. Will have pics etc etc. ready in time for Smoggycon on the 24th November.
Posted by Graham C at 19:20 No comments:

As many of you who have followed this blog it has takne me far longer to raise the forces to fight my first action. A refight of Charles Grants 'Sawmill Village' or Scierie Village as I have called it in my campaign.

So in the last blog we left Sir Harry marching over the border of the Duchy of Comyn, his orders to sweep Scierie Village in a demonstration of force in retaliation for raids that have been taking place along the border.

He had anticipated little or no opposition but as his troops had left Gysburgh a shadowy figure was seen riding off ahead of them bringing news of their departure to General Pomerol of Comyn who had happened to be visiting troops stationed in the border area.

Upon hereing the news of Sir Harry's intent General Pomerol mobilised what troops he could and set off towards Scierie Village to give those red coated devils of Albion a surprise they wouldn't forget.

As they approach the village Sir Harry's scouts report that a Comyn force of similar size to their own is heading for the village and is likely to arrive at the same time.

Sir Harry relished the thought of engaging enemy regular troops and at once issued orders to his Officers. 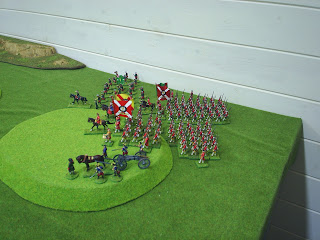 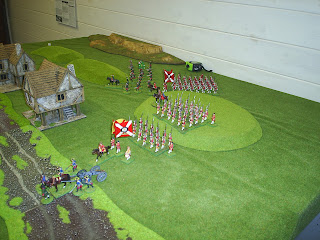 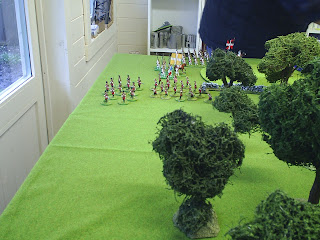 General Pomerol in the meantime issued his orders, the Regiment Nuilly-la-foret (les Lapins) were to advance South through the woods towards the village and engage any enemy found.

Pomerol would lead the two Regiments of foot de Grancy and Nuilley with artillery to the North of the Village, the artillery would depoly at the end of the stone wall to cover the open area in front of the wood and support Les Lapins.

Regt Grancy would move North round the village and Regt Nuilley would turn South past the stone wall and enter the village by force if necessary. 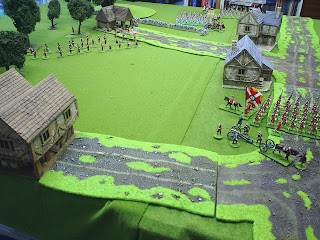 The picture above shows the Albion artillery depolying just as Les Lappins emerge from the woods, the Talisker foot are moving around the village ready to deploy in the North can be seen General Pomerol and the remainder of the Comyn forces. 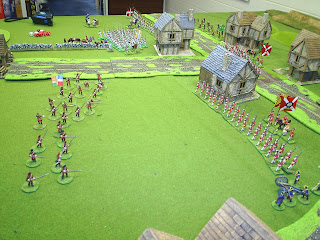 Les Lapins and the Talisker foot exchange fire with Les Lapins gaining the upper hand, however the Albion artillery lends its support by firing cannister at the light infantry.
The 25th Albion can be seen deploying in the centre of the village whilst the Royal Albion and the Regt Grancy exchange fire, the Royal Albion swiftly exert their authority (lots of 6's tee hee).
The Duchys artillery has deployed at the end of the wall and has started firing cannister on the flank of the Talisker foot, fortunately Lee's dice rolls were not up to scratch and few casualties were caused.
The Regiment Nuilley can be seen marching in attack column ready to enter the village. 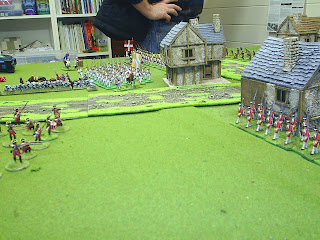 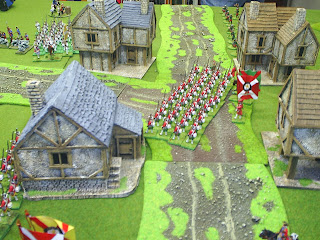 The 25th Albion deployed in the centre of the village ready to engage the Regt de Nuilley, at this time the Regiment Grancy had reached 50% casualties due to the contiued excellent shooting of the Albion Light Infantry and had started to fall back thus exposing the flank and rear of the Nuilley regiment.
Les Lappins and the Talisker foot with their respective Artillery support had almost fought each other to a standstill. 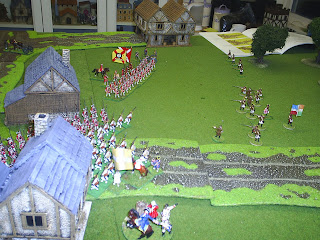 The Regiment Nuilley launches their assault on the Albion foot, they receive a weak volley and charge home but are held by the Albion troops to take the melee to a second round. 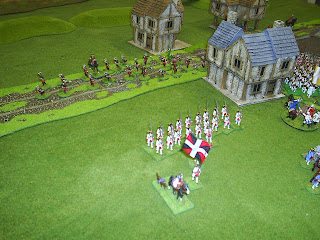 At the same time the Regiment Grancy were now in full retreat and the Albion Lights were follwoing up to keep the pressure on, General Pomerol was under threat as was his artillery. 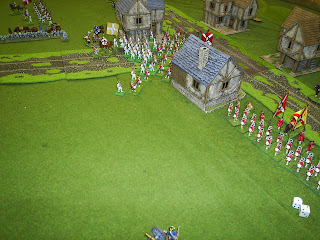 A second round of melee was fought with both sides trading casualties like for like, however the Regiment Nuilley faltered and had to fall back. General Pomerol realised he had failed to stem the incursion and called for his men to leave the field. 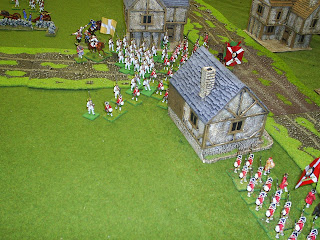 General Pomerol can be seen sending his Courier to inform the Court of what had happened, Sir Harry was pleased to see the battle ended, the Talisker foot had lost 50% of its unit and the 25th Albion were badly mauled. However Rupert Gibb and his Light Infantry had suffered little and had caused grievous damage to the enemy ( lots and lots of high scores!!!!) His name will be highlighted to the King.

That night Sir Harry couldn't help but smile as he drank a small malt and watched as his troops loaded wagons with supplies and other small spoils of war from Scierie Village. Now could he convince his King to press their advantage and launch a stronger force deeper into enemy territory!.

Albion Forces March to do Battle!!

Following a series of Border Raids by forces from the Duchy of Comyn, King George has ordered Sir Harry 'Spitfire' Douglas to make a 'Demonstration of Force' against the intruders.

Sir Harry has determined that the likely centre of enemy activity is Scierie Village just a few miles over the Albion border.
He has ordered his Brigade to assemble and march on the village, there he will sweep the area for weapons, stores and signs of enemy armed activity! 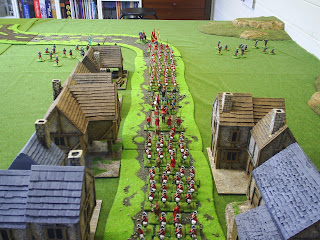 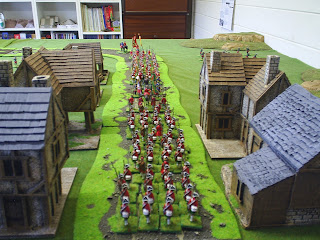 A view from the rear of the column as the leave the border town of Gysburgh, at the head of the Column the Royal Albion Light Infantry can be seen deployed on the flanks. 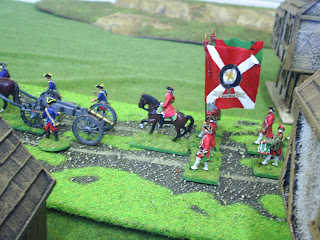 The single piece of artillery in Sir Harry's brigade followed by the 25th Albion with Colonel Theakstone at their head. 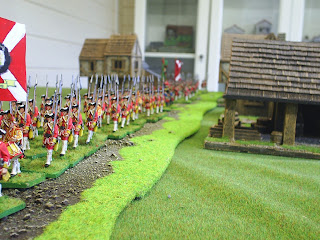 The Talisker Foot lead the column as it leaves the village. 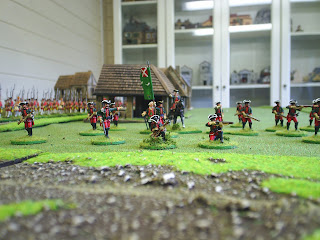 Rupert Gibb with one company of the Royal Albion deployed on the flank ready to scout ahead. 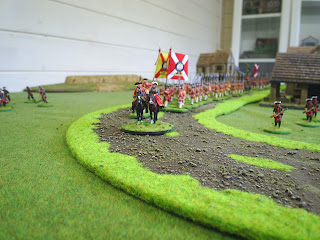 Sir Harry with his companion Sarah Farmer-Pilkington lead the troops, just behind them can be seen Colonel Whitbread of the Talisker foot.

Sir Harry is of the firm belief that the troops of the Duchy will have little time to react to his incursion and that his men will be safely back in Albion before they know whats hit them!!!!
Posted by Graham C at 16:11 2 comments: