I mentioned in my last post that I was due to meet John Dougan at Charles Grants last weekend to fight a couple of 'small actions' for his forthcoming publication.

As we had already decided to cancel Charles suggested a PBM so I found myself in command of a Hanoverian advance guard consisting of Freytag Jaegers ( mounted and on foot), 2 quadrons ofvScots Greys, 2 squadrons of 4th Dragoons and Grenadiers and Highlanders.

The Jaegers were already on table the remainder of the column had a variable arrival. What lay before me was unknown but the task was to take the village as swiftly as possible and inflict damage on the French rearguard.

I don't intend to disclose what happened as the engagement will be published, Charles sent regular reports with photos ( one of which appears below).

Over 20 bounds were played and I'd forgotten how good PBM games are, limited intelligence only reacting to what you're told or can see from the photos all damn good fun and of course Charles enjoyed himself. 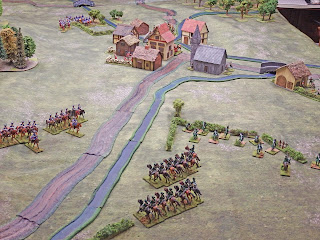 With regards the other PBM based on the Jacobite rebellion I've ended up as General Cope, currently sitting in the highlands looking for Jacobites 🤣.
I hope to start catching up on some painting- I anticipate a full lock down shortly judging by the number of idiots who have decided to ignore Government advice. Even locally the Police were abused by people walking on the seafront when being advised to conform.
A generation of people who have just done what they want and when and can see no reason to change because they only think of themselves.
Rant over

Keep safe and carry on painting

Interesting times!!! What's on the bench?

So I'm not going to ramble on about the current crisis and is it over reacting or not - bottom line is whatever the issue a lot of people are going to suffer.
So now that Salute is cancelled and I suspect most other shows until at least July/August then as far as the business is concerned the pressure is off in terms of show prep and as long as the money comes in then business will continue.
The paint bench is back to its messy self and this weekend there will be a tidy up, priority is the Jacobites and my new French Indian War figures. 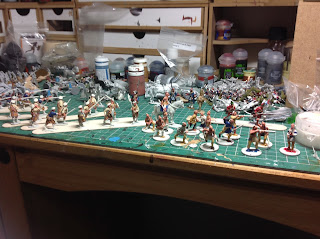 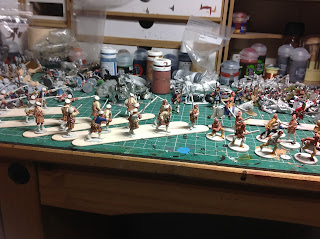 I was due to go to Charles Grants this weekend for a couple of games that will appear in his forthcoming book however we have decided to cancel that, but on the upside we are doing a pbm event instead so tonight over a malt I shall be pondering over the maps and issuing orders for my Hanoverian force.

In addition Alex Burns on the Seven Years War convention Facebook page was looking for volunteers to sign up for a PBM game of the Jacobite Rebellion how could I resist - kicks off Sunday.

Finally I think this Kickstarter is worth a bit of  a highlight https://www.kickstarter.com/projects/1527901373/steel-fist-miniatures-english-civil-war-in-15mm/comments
Oliver James is a self taught sculptor and these 15mm are super and compatible with Peter Pig, there's a few days left so be tempted.