What's on the desk

With preparations for Salute starting early due to my trip to America before the show painting time is a little tight but I'm determined to squeeze in some hours.

The next batch of Highlanders are on the table - I paint these in 12's all wearing the same Tartan then when I have about 60-70 painted I base them up varying the figures.

The horses for the British Horse Guards are under way - I don't enjoy painting black horses - a lot of effort for little show.

Ticking over a few more 15's for the first day at Gettysburg project and the fuzzies still waiting patiently for their 'lick' of paint to start.

All good and in the sidelines still more of the plastic and lead pile is getting sold off! 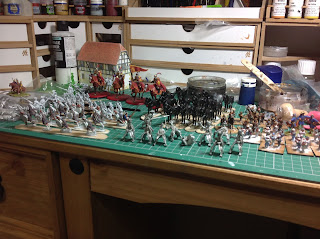 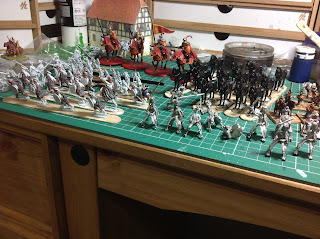 To the Sugar Islands

Even though the Teesside Triumvirate, as Duncan MacFarlane used to call us, is now down to one ( me 🤣) I have always tried to still present a demo game at Partizan, this year I have decided to change theatre of operations and move to the Caribbean.
Stuart Insch's excellent publication on the Sugar Islands campaign inspired me enough to do some figure conversions for him in terms of Compagnie Francais de la Marine and some various militia types.
Whilst I don't think these are good enough for retail they don't paint up to bad.
So the first 80+ figures are just about ready - the British 38th Foot ( awaiting their colours) and a host of French. NCO's require muskets, spontoons etc. 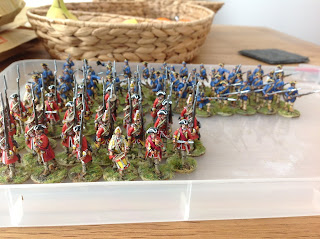 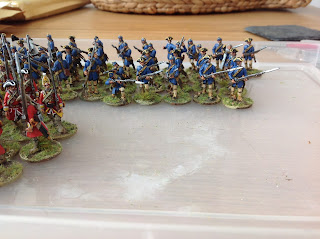 Next up some militia- I'm just hoping that the Naval landing party will be sculpted by Richard  and cast in time for the demo.

Just got to finish off designing the scenario.
Posted by Graham C at 12:08 10 comments:

Great cheers as tonight I can officially start work on painting and basing figures I have finished unpacking the majority of the books paints etc and assembled new book cases, paint desk, computer desk etc. So quite a nice environment to work in.
Still a bit of rubbish to remove from the floor 🤣 But perfection can't be achieved overnight. 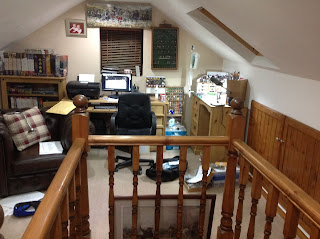 This is one end of the loft room the other end holds the book cases, TV etc etc. So I'm really pleased with the space and I can also get a 6'x4' table in here until the garage conversion is complete.😀

As to the paint desk then this is a catch up process I am busy basing British 38th Foot and Compagnie Francais de la Marine for the Sugar Islands demo game at Partizan. In addition more Highlanders hit the bench to be assembled, undercoated etc. (Culloden will happen!).

The little green chaps in the background are more of the Prussians/Hessian 3d prints which have now been sent off to Griffin for casting into metal. These are part of the project I'm working on with Charles Grant for a forthcoming publication on skirmish actions in the Seven Years War. 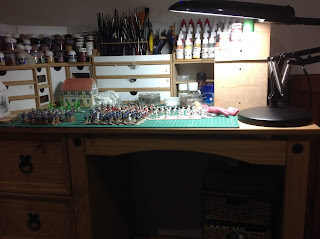 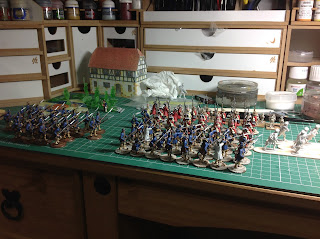 I did attend the York show yesterday and from a Social point of view was excellent meeting old friends etc and a tactical meeting with Dave Marshall from TM terrain re a project. No photos though again certain areas were extremely crowded - a couple of traders had been allowed to bring their racks etc well forward narrowing the space between themselves and the demo game tables making it impossible to stand and look at the games as you were effectively blocking the aisle. Likewise the bring and buy was extremely crowded and uncomfortable and this is something the organisers certainly need to look at. It was a similar experience last year, for those in wheelchairs etc they would find great difficulty in gaining access to some areas.