Not quite the same ring as Paper Roses by Donnie and Marie Osmond but more fun !

Some time ago on one of the forum's a discussion took place re our wargames bucket list - thos games, battles campaigns we would like to play before our time is up!

All the usuals Waterloo, Gettysburg, Belnheim, Gaugamela etc etc turned up and whilst I'm lucky enough to have ticked off quite a few on my list as you would expect there's still quite a few I would like to do.

One of these is the 1066 campaign - don't ask me why it's just one I would like to do, I've started the project twice -once in 28mm many years ago and after painting 400+ vikings with the thought of having to paint around 500 Saxon figures and the same again for the Normans I gave up and sold the Vikings.

Then about 6 years ago I had another stab this time in 10mm this time I painted the Saxons first but the same stone wall was hit and there were other projects I would rather paint.

So when Helion books started to releases their Battles in Britain books (and now Battles in America) I thought third time lucky. Now there is now way will these replace 'real' figures but Peter Dennis is a damn fine artist and I think he has made some wonderful images.

So in between painting etc the snip, snip, snip can be heard and lo and behold the Saxons for Fulford gate are just about done 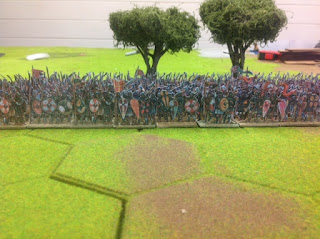 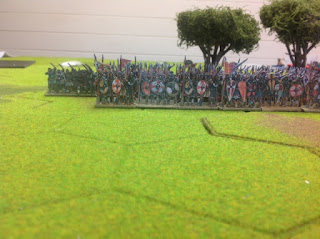 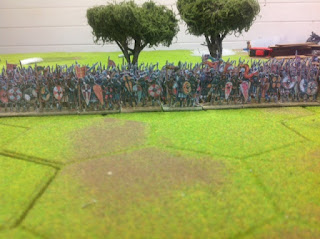 Now as I also enjoy board games this sort of thing fits neatly between the two, in addition the rules by Andy Callan seem pretty good as well.

With advancing years and no desire to keep adding to the already substantial lead and plastic mountain I think this is a great halfway house.

For those who dont wish to cut out so close to the figures etc. I've been playing around reducing the figures and painting in the sky - will show some later they end up around 20mm although I did go down as low as 10!!

The books are available from Helion books and Amazon and are certainly worth a look, his AWI one is especially nice. To come is a Marlburian and early medieval.