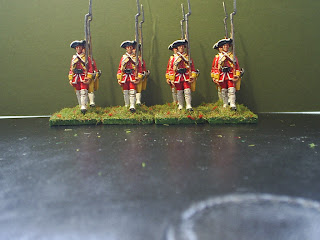 I will have to paint the figures for both sides, therefore I will alternate betwen the countries and my first milestone wil be to raise forces to refight Charles Grants 'Sawmill Village'
The first unit nearing completion is Scotia Albions 'Talisker Foote' I'm on with the last eight line troops and then the command will follow.
Hope people like them.
Posted by Graham C at 12:02 9 comments:

A little insight into Scotia Albion and my thoughts of how this idea will develop. I based the country on Nova Scotia and its arch enemy the Grand Ducy of Comyn in New Brunswick.
Scotia Albion is ruled by King George or as he is known to many Fat King George, he is supported by his three sons Princes Charles, Edward and Stuart.
To the South of the Island lay the Mountains and Highlands occupied by an unruly Clans of Highlanders, however they have taken a shine to Prince Charles and he governs the province.
Prince Edward is now the Governor of Edward Islander after he led a successful invasion taking the island from their enemies. Prince Stuart prefers to stay at home and play Politics.
Other characters that will be introduced will be Brigadier Maxwell and his notorious 'Black Watch'.
Blakeney - Edwards the Lord who beacme a pauper, the pauper who became a chef and the Chef who became a General.
The redoubtable General MacLean, Siege Engineer supreme.
More on theeir enemies later.
Posted by Graham C at 11:54 No comments:

Well after much trial and tribulation I decided to dip my toe in the water and start the blog.
I've followed the Emperor and Elector for some time and all its associated links and that has dragged me back into the 18th Century.

The revived interest in Charles Grants Charge meant a return to my roots of gaming and the wonderful Minden Miniatures meant that I could collect an army in 'classic' poses. So the project has begun.

The fictitious country of Scotia Albion and its arch rivals from The Grand Duchy of Comyn are about to continue their long struggle for dominence.

Over the coming weeks I shall fill in the Historical background, outline some of the characters I've invented and hopefully report on the painting progress , which does go in fits and starts.
Posted by Graham C at 07:44 No comments: