I shall try and keep this fairly brief and give some more thoughts not so much about the quality of the show but of attending it etc under the current climate.

But first the purchases were modest 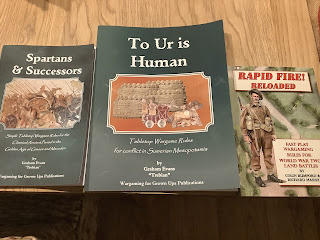 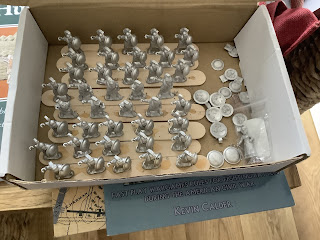 The ancient rules were both show special £5 each and were bought due to their focus on slightly different game mechanics and periods covered -Spartan to Successors is dice less and uses playing cards and grid movement, different coloured cards allowing different classes of units to perform different actions etc. Limited command and armies designed to be around 12 units. Not fully read or digested.

To Ur is Human! Not read yet but as well as Classical Greek the Bronze Age is my next favourite ancient period.

Rapid Fire Reloaded also £5 is a quick play version of the Rapid Fire rules and appear to be very popular. I loved Rapid Fire and whilst I sold all my 20mm collection when Lee died I still have a few 15’s and a colleague who has a large collection of 15mm stuff I just need to convert him now.

Now a few more thoughts on the show this isn’t about the quality ( which was excellent ) but more about attending in general. When I saw the photos of the Falkirk show it was clear that the majority of people who attended wore masks when moving around and perhaps I naively thought this would be the same.

Laurence and Richard the principal organisers and thoroughly decent sensible chaps had advertised for some time that they asked people to be sensible, wear masks when moving around, don’t attend if you feel unwell and use the sanitisers etc around the hall. They didn’t wish to enforce the restrictions and relied on people’s common sense.

Unfortunately that failed big style, posters on the entry points reinforced the requests together with asking people to use the NHS checking in scan. Whilst a lot of people wore masks as they entered within an hour or so the vast majority of people weren’t. I met a couple of people I know who attended and who were full of cold and no masks why? Where was there consideration for others, I’ve also seen comments by some that they were unaware of the requests, pretty hard to miss if you came in the main entrance.

I can’t quite fathom out the difference between to the two shows in that respect. I’ve also seen some kick back now that the Salute organisers have announced that the Excel require people entering the facility to show they’ve had both jabs, are exempt or had a recent negative test with some people saying they won’t go as they will not be dictated to?

If by next year we are still in a similar position then I hope there is a rethink regarding entry to the event.

I briefly mentioned the York show in February next year, I know they are not having a bring and buy and have moved the downstairs games to the vacant spaces upstairs however if they decide to just ask people to be sensible rather than insist on mask wearing I won’t be going, the show is always busy, crowded and uncomfortable.

It’s a difficult decision as the hobby has supported me over the last 45 years through some difficult times and the shows have been an essential part in that, providing inspiration and an excellent way to meet with friends socially.

Once again there is no criticism of the organisers who did everything right except putting their faith in the attendees and bearing in mind the age profile of the majority of attendees it’s a bit like Turkeys voting for Christmas!

Graham, interesting post. I didn’t go to this show (boo hoo), but the general lack of mask wearing, even on a voluntary basis seems something of a surprise at a venue with a footfall of 1000 people since the UK is currently recording 35 - 40,000 new cases each day. I spoke to a friend today who said he had just watched an EXPO video and that everyone there was masked! Perhaps it was a condition of entry.

I agree with you. Its a small thing to wear a mask. My son an I recently attended a NFL football game (Buccaneers vs Cowboys). While in the stadium we wore masks the entire game. It did not dampen my enthusiasm or diminished the experience.

If wearing a mask to a miniature Wargames convention us the price if attending I have no problem with that.

Looking at everyone’s pictures from the I was quite surprised at how few masks there were to be seen and given the age demographic and the current rate of infections… the highest in Europe I believe… I would have expected more cation.
I would have like to have gone…but I suspect I would have felt very nervous…

Overheard one lady telling one of the traders she had just come back from holidaying in Scotland.
She said she was glad to be back as it meant she now no longer had to wear a mask !

The problem is that people now consider they are immune; sadly not true. You can catch it more than once, and although rare even die despite being fully jabbed.
Cases are not going down, nor or numbers of deaths.
It seems we are happy to accept daily deaths averaging at 140. That's 980 a week, 3920 a month and over 40,000 a year. Is it me or don't people care?
This is before the impact of flu or other opportune viruses. I see D&V norovirus is rife.
As for the anti-vaxers and conspiracy theorists; fine believe what you want but there should be consequences. No NHS treatment for Covid (since it doesn't exist). No entry to venues, no travel etc. Why should everyone else suffer for a minority? Break the law and harass people? Suffer the consequences.
At the bare minimum, masks in crowded venues is hardly much to ask.
I can see a new crisis if we continue on this route.
I'm fighting an unnecessary return to work, so wargames shows are not in my priority.
Neil

I never noticed any signs Graham upon entry and to be very honest it never entered my head to wear a mask. You do realise we actually shook hands at the show and it was very nice to enjoy such a simple friendly gesture. I look at events now and accept this is as good as it is going to get. Im vaccinated, Ive just had my flu jab and eventually will get the booster. I cant see what else one can do. I understand people being frightened and can also understand if they dont want to be amongst other humans, but to be very honest Graham Im now at the stage its either get on with some form of life or simply give up which I refuse to do.Apart fro that it was great to see you.

Bit of a pot stirrer this post.
Robbie, we did shake hands because like you I need some normality but I did use my hand sanitiser after 🤣.
I just think trying to find a balance at the moment is a bit difficult what I don’t want to see is that because of lack of care we end up losing the ability to attend shows for another year!

It doesnt seem much of an ask to get people to wear a mask, I mean we have spent much of the last 18months wearing one so its not like its someting we are not used too doing. Ive friends organisng events where they are making obligatory to wear a mask - They are making that clear well in advance so no suprises but they have apready had outraged e-mails! I find it odd, sort of reminds me of when we could no longer smoke indoors - loads of radgy rants about loss of liberty etc etc but now nobody would think twice about lighting up in the middle of an event. Anyway good to see events happening.

I cannot understand the bad attitude to mask wearing at these events. I would wear a mask, it’s common sense after all. Wait to the flu and other bugs hit this winter.
I have not been to Salute since 2007, the Excel is an awful venue. Would imagine footfall will fall drastically at this event this year, I believe numbers have been declining slowly for years. Am very uncertain about attending Warfare at its new venue in Ascot. Think I will make my mind up much nearer the date. I am fully jabbed for COVID (booster expected) and Flu.