I didn’t see that coming! And off the bench

Well before I start on what’s been progressing on the painting front I’ve been a bit blindsided by real life.

I’ve suffered from IBS for a lot of years and during flare ups know pretty much how to deal and return to normality. A few months ago a flare up occurred and no matter what I’d did it didn’t seem to get better and despite my reassurances to my wife that it would sort itself out it didn’t and she brow beat me into to going to Drs. To cut a long story short I have been diagnosed with colorectal  cancer, I won’t bore you with details etc but following all the tests etc the specialist is pretty certain it hasn’t spread and I’m just waiting for a date for the operation - hopefully within next three weeks.

It was a bit of a blow and a shock but after the headless chicken moment it is what it is and will be dealt with. I’ve had great support from the James Cook Hospital staff and from friends who have been told. Special thanks to Chris Gregg for some straight forward no messing advice which came just at the right time 😁

So based on the assumption I can’t do much for 6-8weeks following the op I will be spending this weekend prepping figures for painting, basing etc in the belief that I will be able to do something 😁

Onto the progress reports of the bench - first up are the first two demibrigades of French for my 1796-1800 project. I’m taking some liberties with uniforms etc to cover the period. I’m mainly using Elite miniatures, which have been fun to paint, but some Eureka minis will make their appearance. So the 92nd and 99th regiments are done. Cloth flags from Maverick models.

I still haven’t decided if I should Matt these down or leave them shiny - a decision for the future. 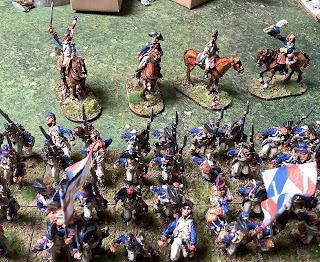 The battalions are designed for use with the Soldiers of Napoleon rules but I can ‘go large’ if necessary.

In addition slow progress on the 40mm rebasing, mainly due to the shock news, but the first French battalion is done

I will get another couple of units unbased and ready for rebasing when I’m home from hospital.

So if service is interrupted anymore than normal don’t worry.

Shocking news, for sure. Best wishes for a successful navigation through your challenge.

Hi Graham, firstly, sorry to hear your news and I hope the journey that you make with James Cook Hospital will be as smooth as these things can be and that you have a speedy recovery.

I’m sure you already know of it, but there is an e-zine called Warning Orders which is free to download, I think they are up to something like issue 60. Anyway, a few of those issues downloaded onto your tablet can make an easy read companion when visiting hospitals and sitting around in waiting / treatment rooms etc. They cover both figures and boardgames. Here is a link to their front page http://www.wfhgs.com/wrngorder.html

I am really interested in your Soldiers of Napoleon project and perhaps a time has come when you start spending my money instead of me spending yours :-) those rules interest me and since we like similar stuff, I will take a punt on them.

Oh and matt varnish if we are voting :-)

Best wishes for your upcoming procedures and hoping for a good result.
Demi brigades look great.

Really sorry to hear the news and fingers crossed for a successful outcome when they get to it. The figures look really lovely and to echo Norm I am with the matt for these beauties!

All the best and take care,

Best wishes to you Graham, the French looking good.

Hi Graham. A very open and brave post mate. It’s a shock to the system when that kind of diagnosis comes along however you’ve acted on the symptoms, done the right thing, gotten opinions and now the planning, procedures and recovery commences. Support you have and great medicos by the sound of it as well.
The figures look tremendous and I’m really looking forward to seeing you build this collection over the coming years…lots of them mate.

Gents,
thanks for the comments as it happens I got a phone call today saying I can go for op on Tuesday next week so fingers crossed.
Norm,
I think you will like the rules, I’m favouring them as they are designed to be played on a 6’x4’, I like the features that it’s generally a battle within a battle and the use of cards for activation, rally etc will suit solo play. Whilst the rules don’t cover the early period it shouldn’t take much to adapt them.
Whilst the French units are small and potentially fragile the ability to deploy skirmishers will help them and cause problems to the Austrian line who generally have larger units but no skirmishers so potentially interesting challenge for both. We shall see.
Carlo,
Thanks for the comments. I really like the Elite minis for this period and there will be more to come for sure.
And yes I think I need to put the Matt varnish on

Graham, best wishes on your health, a real shocker, went through something similar a few years ago now and it was in the downtime recovering that I got back into wargaming, every cloud etc! Your French look stunning, there is something about Elite figures that really work for Napoleonics, they have some weird poses but in a group it somehow works. All the best for now.

Best wishes Graham . Sure JCUH will sort you .

I'm sorry to hear about this piece of news. It sounds like they caught it in time, nevertheless I will be thinking about you and sending some good vibes your way.

Very best wishes from here too, Graham. Will be thinking of you on Tuesday.
Ronnie

take care and take it easy.

Sorry to hear your bad news mate. Hope you’re soon fighting fit again. Shiny is the way to go with those beauties I think.

Best wishes for a full and speedy recovery..

Well I'm relieved to read that the news is as good as it can be and wishing you a speedy recovery from the op Graham.

Seeing those 40mm's again is a treat, I had forgotten what characterful faces they have. Are you doing any additional painting on them as you go or just rebasing? Bases are a huge improvement.

Sorry to hear about that bad news - fingers crossed for a successful operation and quick recovery.

Graham like the others I am terribly sorry to hear that news. It is good to hear you're getting good care and that Chris has been a great mate by the sound of it. You have my best wishes for the op and what I hope is a speedy and full recovery.

Graham. So pleased to hear you have an early op. I'm known for my straight talking and no-nonsense and it often gets me into trouble, but thanks for the shout out and the endorsement that, for you at least, it has helped. I fully intend to keep it coming mate, till you are out of this. As it says on my wargames room wall "Everyone is entitled to my my opinions!" :-) . The troops look great by the way. Matt please.
cheers
Chris

I’m so very sorry this is happening to you. But I’m relieved you were diagnosed early, and that your procedure has already been scheduled. I’m sure it will be successful, and you will soon be on your way to a complete recovery. Just know you have many, many friends who will be praying for you, and thinking of you.

Graham - that's a bit of a shaker all round - very sorry to learn of your diagnosis. Sincerely hoping that everything goes well - if there is good news, I guess it's that they tagged it early. I'll be thinking of you, mate - every possible good wish.

Wow… a bit of a shocker indeed Graham.
The good news is that it’s been spotted and you are getting it dealt with…
Very nice Napoleonics I am looking forward to seeing lots more.

So very sorry for this news. Best wishes on the operation and a speedy recovery.

Hi Graham. Sorry to hear the news on the health front. Take it easy, and go easy on yourself. You might find that you simply want to have a shout at someone, for no reason whatsoever... I know. You've got my number. See you very soon mate. Phil

Graham. Have only just heard your news, very sorry to hear.

You will remember that I am a cancer survivor so there is light at the end of the tunnel. Hope your outcome is as good as mine is.

Thanks everyone for the words of support it is very much appreciated and I will take the words of advice and support forward with me.
Everything is now set for the operation on the 20th so will be back on blogging as soon as possible 😁

All the best again for tomorrow, Graham. Sending you lots of positive thoughts.
Ronnie

Sorry to hear that news, I do hope all goes well today.
Those French look superb, by the way!

Hi Graham, just a line to say that hopefully your op went ahead yesterday as scheduled and that doctors are pleased with how things went.