A belated Happy New Year to you all, I’m a bit late in catching up with things as I appear to have had some pretty dire adverse reaction to the booster jab, investigations still ongoing but I now feel somewhat better and thought I’d open the year with a post.

First for some reason blogger has fallen out with me and I’m unable to post comments on blogs, so apologies to Jim, Phil, Robbie, Norman, JBM, Tony,Aly etc all of whom I’ve been trying to comment on their blogs and all I get is some sort of blipvert which appears and disappears so quickly it’s impossible to read. I’m still looking as to why but have found no solutions as yet.

PayPal is now no longer my friend before Christmas I sold some figures to a guy in France, about 3 weeks later he contacted me saying he’d received a customs form for €22 to be paid he sent me a photo of the form and a clear message saying he had no intention to pay the duty etc. Another two weeks pass and PayPal notify me he’s made a dispute for non delivery of goods, I duly submitted photos of his comments, the customs invoice and certificate of posting. PayPal then asked for a photo of the label that I’d placed on the parcel clearly indicating the guys name and address ( apparently he’d said that the Royal Mail certificate of posting didn’t show his name how did he know it was for him!!!  Do you all take photos of the address label. Well you’ve guessed it they found in his favour as I couldn’t produce the photo. So a reimbursement of the his money, a £12 PayPal charge for dealing with the claim and no returned good as yet not a good start to the year.

I have bought these rules 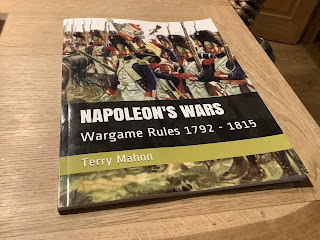 Aly Morrison mentioned them on his blog as being interesting as they don’t use dice at all but they use playing cards. I’ve only had time for a quick skim through and indeed he is right  they look interesting for troops to carry out actions melees etc cards are played the better trained troops have access to more suits.but that’s about as much as I’ve picked up so far.

I intend to give some thoughts to projects for this year - that will appear next post but one Butterfly that has landed is Iain McDonald from Flags of War is going to release a full range of Reivers together with rules et and they look excellent.

That Pay Pal incident smells like a bit of a scam - although if the buyer has refused to pay local import duty, presumably it is les Douanes who have the package and not him? I dont have a PP account - when I use it to pay suppliers, its just via a one off invoice scenario

Hi Graham. Very disappointing about the sale of your figures and PayPal. I assume if he sent the figures back to you, you would end up also paying a customs bill at this end!

Blogger has me struggling to leave comments as well Graham . Hopeless. That chap in France seems like a bit of a tosser buddy…the year can only get better.

Sorry that it's been a rough end of 2021 and start of 2022. When sending parcels abroad my post office always gives me proof of posting which I thought had the recipients address on it - must check next time. Let's hope that 2022 brings more joy.

Very sorry to read of your PP issues Graham, you must be livid. have the figures been returned to you yet, I really hope this is the case. A bad experience all round. As said above the counter ticket proof of postage will have the abbreviated address on it surely? As you say who takes photos of package labels? I hope it is quickly resolved for you.

Chin up Graham. Clearly there are fabulous times ahead.
Ronnie

That is a bugger about the booster - although it sounds like you are on the mend from that also.
As to the clown with the Paypal dispute we have a name for people like that .... Wayne Kerr. Unfortunately I guess there is not much that can be done about it. Hope things right themselves soon so you can get on enjoying the hobby.

Your buyer sounds typically French, a foul and most foreign nation.
I am surprised at Paypal though, is there a higher authority you can complain to?
I have to admit my booster knocked me back a bit, but not as much as you by the sound of it.

I have been having a good read through of the rules… they seem relatively straight forward… the only slight concern I have is that they might make things feel more like a game of cards rather than a game of toy soldiers… I will certainly give them a go though.

As to commenting on blogger… the word on the street/web is that you need to allow cross web-site tracking on your browser and it seems to solve the issue… well with iPads… I am not sure about P.C.’s.

Hope your on the mend properly .

Interesting on the rules

Gents,
Thanks for all the comments, as far as the PayPal issue it feels like a scam and I don’t expect to see the figures again either.
Aly thanks for the advice it now seems I can make comments again 🤪 so I need to play catch up. I think on reading the rules a bit more I like the concept and will give it a try but like you I wonder if it ends up as a game of cards more than a figure game? We shall see.
As to my health thank you for the support, getting better slowly I think ! Going to be a long haul!

Been having the same problem all week mate - I’ll be surprised if this missive gets through but it’s worth another shot…lol.

Hello, Graham.
My sympathy on on your tough beginning to 2022, and I hope things get better. Best wishes for a full and speedy recovery.
Your experience with PayPal & the Frenchman reinforce my belief that any sales I may consider in the future on eBay or similar will strictly be Australia only. Mind you, with the cost of postage from Oz to anywhere else, that is not really a surprise!
I would appreciate if you could review & give an overview of these new Napoleonic rules when you get a chance. I could find very little about them on the net.
Cheers, Rohan.

I am glad you are getting better Graham.
This is a Test post as google has been playing up for posting comments.