Coming off the bench!

Thought I’d squeeze one more quick post in, on the recovery to health the last two weeks has also seen me trying to clear what’s on the bench. Although that will slow a little as the recent storm decided to take out 80’ of fencing so the next few days will see me otherwise engaged putting new fence up. 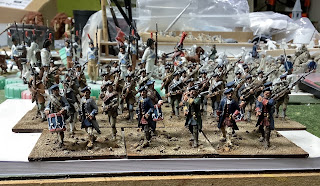 Then I mentioned I had been lulled back into WAB, and Greeks were on the menu. I had hoped to finish these off but there’s still 15 to go to finish the first batch and from the photos I can see there’s some touching up to do mainly Lucid eye and Foundry. 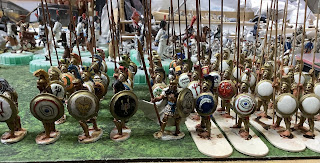 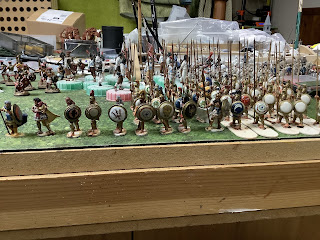 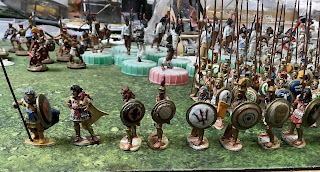 Then of course I had to paint up some of the Warlord epic French cavalry I got with WI - quite enjoyed doing these. 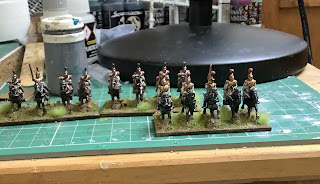 Finally the club project epic ACW so these guys are assembled again waiting for the grass to grow. Still quite a bit on the bench to finish but we will press on against the odds.

The Highlanders are super Graham, very nice indeed. Must admit I quite like the look of this epic lark from Warlord, very tempting!!

Matey, given your work rate, no one can accuse you of ever letting the grass grow…top stuff as usual.

All joyous, but my eye is particularly drawn to the Napoleonic Epic as I got my Wargames Illustrated sprue today. Nicely done, did you paint onto black primer dry brushed white?

They all look very nice Graham though I am particularly drawn to the Scots the way you present them. Great job on those Epic cavalry too; I must assemble my free ones......

Quite an eclectic mix and looking very nice indeed.

Gents,
Thanks for the comments variety is the spice of life.
Norm, I use GW Wraithbone spray as I find it a good base for using the contrast paints which I use for the horses, French blue etc.

Lovely looking toys all round…

I really like the look of your Lowlanders - excellent work! It's giving me a prod to get on with my own 45' project stuff. What do you use for the heather as I haven't got as far as basing yet?

Great to hear you're on the mend Graham
Richard