Well received a few new books to read that have caught my eye. 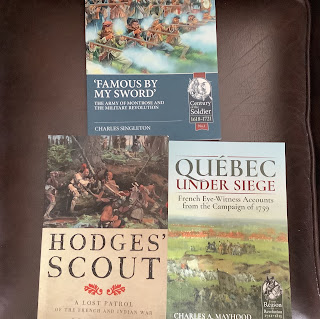 Whilst I don’t game the ECW (yet🤣) I find the some of the characters in it fascinating and bit by bit I’ve been collecting books on some of them and their campaigns. Montrose has always interested me and whilst at first sight this appears to be a pretty basic introduction it will wet my appetite I’m sure.

The French Indian War has always been of interest to me - I remember buying loads of Ral Parthia figures and the Drums Along The Mohawk rules many years ago. Now I’m making my own range I’m back into reading more.

Hodges scout looks very interesting and the book on Quebec I bought as to be honest I know very little of that part of the war and this seemed like a good place to start!

On the work bench I’ve been basing the Saxon fusilier regiment Rochow and Loudon’s regiment of foot for the ‘45, in fact one of the bases has other highland militia mixed in. Really these figures are for the FIW ( ladder lace) but I didn’t want to make new figures or spend hours converting them so they will have to do! I’m sure once on the battlefield most people won’t notice. Please note I did say most people 🤣

Hopefully this week the bateaux, ladders and limbers arrive from Warbases - photos will follow. Although they are being delivered by Hermes so anything could happen in the next 48 hours!

I am using the FIW Highlanders for the 45 as well, same thoughts, once on the table they will do very nicely indeed. Nice haul of books there.

Yup, the FIW Highlanders are more than good enough for my ‘45 army too.
And I still have the “Drums” rules and Ral Parthia figures packed away.
Ronnie

Hi Graham, you certainly have your fingers in a lot of pies :) I love your '45 collection and the figures are the best out there, no doubt about that. You mention the ECW and I agree it's full of characters, I know I painted a couple of 20mm units for you years back, large regiments as I recall. And now you are the owner of my 40mm Peninsular collection too, your collection must be huge!

One thing I have never been able to paint is tartans, I do like the way you do those.

Glad to see we’re on the same wavelength re use of figures.
Lee,
No where near as many pies as I used to. At least now it’s almost manageable, unfortunately the 20mm ECW was a project too far and they went the journey. If I was ever to do ECW it would most probably be with Peter Pig or Wofun but I have enough to keep me going for a while for now 😀