First and foremost I have decided that Crann Tara has reached the point that it warrants its own blog,
therefore as of today the more detailed reports, progress etc will be written up at http://cranntaraminiatures.blogspot.co.uk/

Just means I have two blogs to update and two sets of incentives to get things done!

Second whilst theres more pics on the other blog here's a coupl of the new Highlanders on jackets, the figures have been undercoated and ink washed to bring out the detail 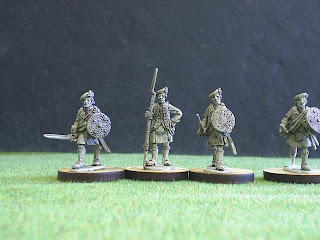 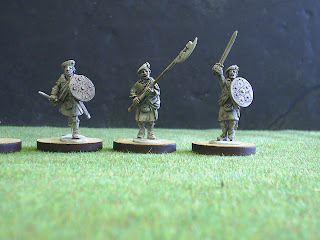 There's more pics on the other blog but I hope you agree that Richard has done me proud.

Thirdly after much deliberation as of next week a colleague of mine Stuart Armstrong of Colonel Bills - http://www.colonelbills.com/ will be carrying the full range of figures at wargame shows. He starts at Battle Group South - Bovington Tank Museum next weekend, so for those people who like to see their figures in the metal first then seek him out and have a look.

I will be continuing to deal with mail order.

I have also highlighted and confirmed the next set of figures that Richard will be sculpting and that following their release I will look to setting up a web shop.

So as from next week this blog should return to a bit of normality and I may get some more figures done.